Founder of the Standard Oil Company

Listed on the National Register of Historic Places, this bulky 17-story office building is named for oil magnate John D. Rockefeller, once the world’s richest man and America’s first billionaire. The structure was erected at the southwesterly edge of Cleveland's famed Warehouse District, in the days when vast quantities of goods — including coal, wood, and oil — were regularly transported across the Great Lakes to the mouth of Cleveland's Cuyahoga River, and thence into the teeming warehouses on the city bluff above. At the age of 31, Rockefeller founded the Standard Oil Company, which he expanded and ran with a firm grip for the next 27 years, formally retiring in 1897. Throughout the following four decades of his lengthy retirement from the gas and oil conglomerate, this teetotaling Baptist established the standard for philanthropy in the U.S. via his Rockefeller Foundations devoted to education and scientific and medical research.

The Weddell House Hotel Fades Away

The Warehouse District site of this structure had been occupied since 1847 by The Weddell House, one of Cleveland’s historic and premier hotels. Travelers across the Lake and into the city patronized the Weddell House for nearly five decades of the city's earliest beginnings. By 1905, The Weddell House was gone, and a sizable portion of The Rockefeller Building stood in its stead. A substantial addition to the office structure was completed by 1910. The building served for years thereafter as a prime location for the offices of lake shipping, coal and iron enterprises, high above the winding Cuyahoga River.

Designed by the architectural firm of Knox & Elliott, the office tower is perhaps Cleveland’s best surviving example of the 'Chicago' style of Louis Sullivan; it bears striking resemblances to Sullivan’s own design for the Buffalo, NY Guaranty Building of 1885. 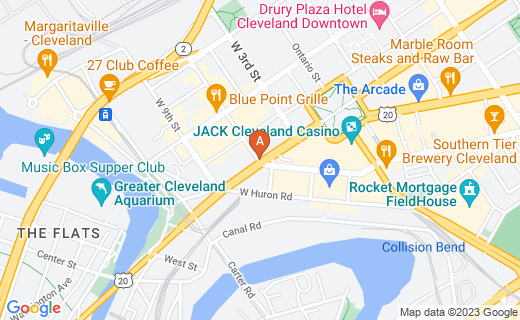 View this fine structure from Prospect Avenue just east of its intersection with Superior Avenue.

With an interior structural steel frame expressed on the exterior by strong columnar verticals, and lower stories decorated with typical Sullivanesque detailing of organic geometry, the office block presents handsome façades to both Superior Avenue and West 6th Street.

As indicated by his name placed prominently at the building’s cap on the West 6thStreet face, Rockefeller was justifiably proud of this building. After the building’s name was changed to accommodate that of its new owner, Josiah Kirby, in the 1920s, John D. Rockefeller then reacquired the building, placing his name back on the structure once again — where it has remained to this day.