The area recognized today as Cleveland’s historically significant Warehouse District began in fact as the city’s prime residential zone. Such prominent settlers as Lorenzo Carter and Levi Johnson erected their log cabins of the early 1800s on this high bluff near the shore of Lake Erie, overlooking the steeply sloped banks of the winding Cuyahoga River below. The Warehouse District extends generally north and west of the city’s heart of Public Square.

With the increased commercial activity and workday population of the area also came many saloons and hotels, including the Weddell House of 1847, the city’s first premier rooming house. Soon thriving commercial, manufacturing and warehousing uses began crowding out the initial residential inhabitants of the district. As building technology improved, more and taller buildings in the area were being constructed with cast iron (and eventually steel), allowing somewhat freer design and greater openness of retail and commercial façades. By 1920, the district’s garment industry rivaled that of New York City.

However, with the boom in suburban expansion that hit Cleveland after World War II, manufacturing began fleeing the city center for outlying communities and their ready workers. Distribution patterns of many consumer goods changed significantly, as did patterns of river and lake traffic, making central warehouses less effective or necessary. Many of the old warehouses began to fall to demolition crews. Those that remained either stayed vacant, sometimes for decades, or found adaptive reuse.

The 1982 listing of the Warehouse District on the National Register of Historic Places stemmed the tide of building demolition. Among the District’s preserved architectural gems are Cudell & Richardson’s Perry-Payne Building of 1888, Daniel Burnham’s Western Reserve Building of 1891, and The Rockefeller Building of 1911, developed by Standard Oil magnate John D. Rockefeller, and designed by the local architectural firm of Knox & Elliot in the style of Louis Sullivan. Dating from the Civil War era are the Hilliard Block and Johnson Block. The District’s structures display not only utilitarian American architecture styling, but also Romanesque and Italianate flourishes.

Today, the Warehouse District continues to undergo substantial revitalization and redevelopment, with the inclusion of many fine restaurants, pubs, clubs, galleries, condominiums, apartment houses and offices. 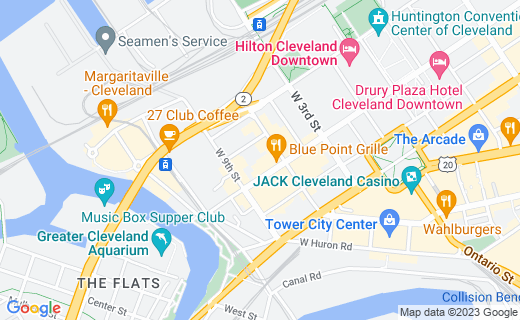