View from The Terrace Club

One of the finer gems within the much larger jewel of Jacobs Field (now Progressive Field) in Cleveland, Ohio, is the facility's Terrace Club restaurant. This members-only or event-only club, restaurant and bar is available for private parties and special events on days when The Cleveland Indians are not scheduled to play on the diamond below. It is also available for game-day seating of club members and guests.

The Terrace Club offers a number of unique and striking physical features. Its bar and table seating cascade down a series of raked terraces overlooking the left field of the baseball diamond below, akin to the adjacent private suites and club seating of the ballpark’s mid-levels. The view of all patrons is directed toward the action on the vivid greens of the playing field, through the high faceted structural glass walls that enclose the restaurant and bar.

Situated as it is, above the third-base-to-foul-pole portion of the park, the facility provides great views of games in progress, especially those longball homers lofted to left field, the bleachers and the towering scoreboard nearby. Jacobs Field’s famous ‘home run porch’ — with its eager standees scrambling for a souvenir homer — lies immediately below The Terrace Club’s several-story glass wall. The restaurant and bar are reached by private elevator from the plaza between Jacobs Field and the neighboring Quicken Loans (or 'Q') Arena, near Gate A of the ballpark. Valet parking can be provided, and the ballpark’s parking garage is nearby. 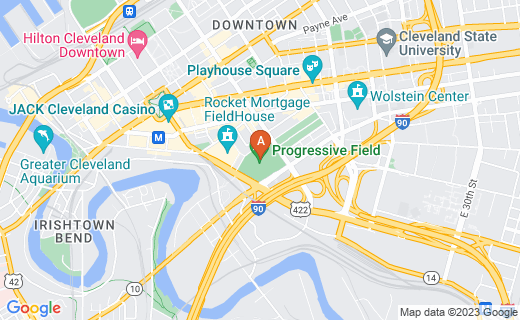 Considered by many sportswriters to be the fans' best ballpark in the country!

At the height of the fortunes of The Cleveland Indians Major League Baseball franchise in the mid-1990s, The Terrace Club served as the site of a host of World Series ’95 and ’97 parties, and welcomed many MLB dignitaries, sportswriters, and fans to the 1997 All-Star Game held that year in Cleveland. Fine upscale cuisine was provided by the Terrace Club’s exceptional staff, with a full-service bar occupying the topmost terrace. Catering services — ranging from the restaurant’s exquisite dining choices through to more standard ballpark fare — were available to events held within the multi-level facility. The restaurant also features some of the baseball art gathered by the Tribe’s previous owner, Richard E. Jacobs.

You can find more information about The Terrace Club or the ballpark at The Cleveland Indians website: cleveland.indians.mlb.com.

The Northeastern Ohio architectural and design firm of ZZ Design Inc. served as a special design consultant to both Jacobs Field and The Cleveland Indians major league baseball team from 1993 through 2004. In that capacity, the firm was responsible for the design of all signs and graphics gracing the urban ballpark, as well as such varied elements as merchandise and food/drink sales kiosks, street pole banners, and special World Series logos and pins, as well as art direction for the 1997 MLB All-Star Game held that year in Cleveland. Headed by partner-architects Richard L. (Rick) and Pen Zimmerman, ZZ Design Inc. has also created many other noteworthy architectural, design and sign projects throughout Cleveland.