Originally built in the early 1890s as a power supply station for the city's fledgling network of powered street cars, the former First Energy Powerhouse in Cleveland’s Flats District is a registered National Historic Landmark. This red brick structure anchors the Nautica Entertainment Complex, just below the heart of the city, on the western bank of the winding Cuyahoga River. Situated on Sycamore Street, between the Detroit-Superior Bridge and the high-level Memorial Shoreway (State Route 2) Bridge, the Powerhouse lies just across river from the point at which Moses Cleaveland first disembarked to found the city that bears his name.

After a substantial renovation of the old powerhouse, the Nautica complex first opened in 1987 as a multi-venue entertainment complex, sandwiched between two of the river’s more dramatic jackknife bridges. The complex encompasses a stretch of the Cuyahoga River boardwalk, dockage for the Nautica Queen river- and lake-cruise vessel (as well as river water taxis), the Nautica Pavilion performance amphitheater, the Sugar Warehouse, the Brewer-Chilcote Building, several parking areas, and the restored Powerhouse itself. Within the Powerhouse were such venues as Windows on the River: a top-floor party room favored for social and business events, Howl at the Moon Saloon, Rock Bottom Brewery, and a comedy club, as well as various other dining and retail facilities.

The former powerhouse was one of the city’s original utility buildings. It lay dormant from the latter part of the 1920s until its acquisition in the 1980s by the local development company, Jacobs Investments of Cleveland. It was then restored and refurbished into the Nautica entertainment complex, which enjoyed its heyday through the 1980s, 1990s and into the 2000s. In 1997, the Nautica complex served as the venue for the Major League Baseball All-Star Gala. It is notable for its utilitarian design, historic styling, high arched windows, tall stacks and aged red brick.

It is said that within a few miles of the Powerhouse are more different bridge structures of different types than on any equivalently sized geographic region on Earth. A short stroll along the Cuyahoga River offers dramatic close-up views of suspension, trestle, truss, scissors, swing and high-lift bridges.

In recent years, Jacobs Investments had proposed various additional development concepts at the Nautica complex and the Powerhouse, one of the most recent being a walk-through aquarium. After another round of interior renovations, the Greater Cleveland Aquarium now draws tourists and locals alike to its 70,000 square feet of aquarium uses and exhibits, including a Marinescape Seatube that allows one to stroll nearly 150 feet through a clear underwater tunnel to commune with the sharks and other sea life.

In addition to Nautica, the Powerhouse, and entertainment and gaming facilities in other states, Jacobs Investments has also developed housing at several locations in downtown Cleveland near the Flats. 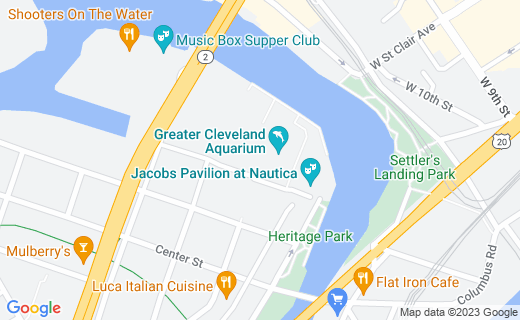