If you happen to be visiting the west bank of the Flats, along the winding Cuyahoga River, in the heart of Cleveland, Ohio, you have an opportunity to get a truly ‘hands-on’ experience with one of the most impressive of bascule bridges of the early 20th Century.

A bascule bridge is any bridge in which a portion is raised by a counterweighted portion being lowered. This massive steel structure, erected by the King Bridge Company of Cleveland in 1907, stands anchored in its lifted position, just outside the entrance doors to the popular Shooter’s on the Water restaurant. Within just a short walk from your parked car, you can reach out and touch the corroding and ivy-covered ballast portion of this engineering marvel of old.

The total length of this trussed steel structure, now raised at an upright angle, is 334 feet. Its primary span over the Cuyahoga River was 210 feet, across which it carried a single set of railroad tracks. Its fabrication was of riveted steel in a warren truss configuration. The bridge truss is of the ‘through’ variety, meaning the rail traffic actually traveled through the center of an open 4-faceted truss. 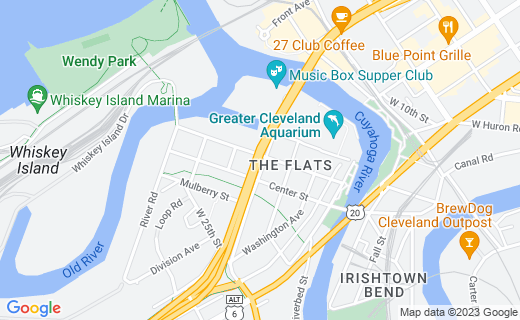