Provo Attractions and the Founding Of Utah

The Ute Nation, the LDS Church, and the Founding of Utah

Interestingly, Provo is located in the county named after the state itself - Utah. That name is part of Native American and European settler history in that it is derived from the Native American Nation known as the Nuutsiu or Utes, meaning People of the Mountains.

The word Ute may come from a Spanish or Apache word similar to yudah (Utah) or yuttahih ("they who are higher up") that was first used around 1598 when Spaniards met the seven different bands of Utes in what is not Utah and the surrounding states. They trace themselves to the ancient Anasazi of 1,000 AD. Provo, the word, comes from the last name of a French Canadian fur trapper that had worked in the area and was known to the Mormon settlers arriving in 1849 from Salt Lake City.

The Utes and Mountains

Loosely stated, Utah is the land of the Ute Nation or the "Land of the Mountain People." The Utes also provided the names for two of their local mountain ranges in US National Forests - the Unita and the Wasatch ("low place among mountains"). The Wasatch Front that is described in the next section contains most of the population of Utah, connected by ongoing suburban development in several of the largest cities so that one suburb meets another in a chain of living areas. 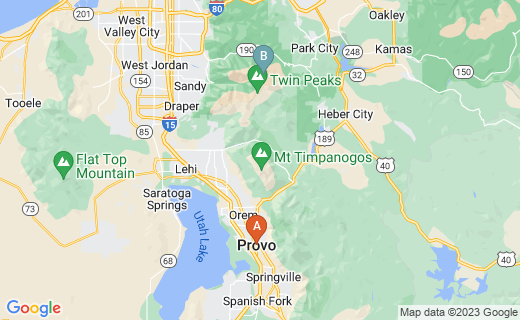 Meaning of the Name "Alta"

The name Alta means elevated and Alta, Utah is about 45 miles from Provo, offering a mountain ski resort enjoyed by over half a million people a year.

During World War II, US paratroopers from an official mountain regiment trained on the mountains in this area. The link features mountain cams and a breathtaking virtual tour.

As Mormon/LDS settlers entered the area around a 50-mile radius encompassing Salt Lake City, Provo, and Orem in the 19th century; peace was reached with the local Native Americans. The settlers founded Provo and the Provo LDS Temple, along with Brigham Young University and the largest Mission Training Center of the LDS Church in America.

The Utes remain largely in adjacent Colorado today, but still hold a total of approximately 600,000 acres of land in Colorado and Utah and to a lesser extent in New Mexico and Arizona. On this land, the Ute Mountain nation operates a Ute Park & Musuem with an 80-mile tour, a casino resort and hotel, a large pottery factory, a large RV park, and other businesses.

You can enjoy these places and activities on a trip to Provo:

The revitalization of Downtown Provo since the late 1990s has boosted Tourism dollars eared as well as increased the quality of life and provided new businesses, living spaces, and jobs for additional residents. Further, the crome rate of provo is significantly below that of the State of Utah and the US as a whole, making Provo a safe place to live and work.

Life Along the Wasatch Mountains

The Provo-Orem Metro Area in Utah is listed as Number Eleven (11) on CareerBuilder.com's Top 30 Cities for Jobs in the US. It received this distinction at the end of 2008. The metropolitan area spans the two counties of Utah and Juab, including about 500,000 people and about 1/2 of the Ute's Native American lands and reservation.

We see by examining the population density of Utah in the image to the right that most of the state's residents are lined up roughly north to south from somewhere above Salt Lake City to approximately 50 miles south of Provo (yellow, orange and red areas in the north of the state).

Sustainability and alternative energy production have become targets for government and businesses in Provo and the surrounding metro area. Provo and Orem both emphasize recycling to their residents and receive significant support in this effort. Provo also offers a Composting Station.

Slow Food Utah is a statewide organization that promotes a healthier lifestyle without the waste inherent to the fast food society. Buy Local First helps in this work as well as to promote local businesses. In addition, Provo is home to a local Food Co-op.

At the University level, the BYU Center for Economic Self-Reliance helps families become self-reliant while observing sustainability practices. Its academic research center helps to develop methods of achieving economic self-reliance in the community and the state. In doing this, BYU addresses the issues of poverty and dependence as well as environmental protection and stewardship.

A Regional Office for Foods not Bombs is also located on Provo. This activist group provides free vegetarian cuisine to the poor, to victims of terrorist attacks, and to rescue workers in a promotion of anti-terrorist and anti-violence stands.

Jobs In Highest Demand In and Around Provo

Higher Education In the Provo Area