Top 5 Things to Do in Guernsey, Saint Peter Port

Castle Cornet or Castle Rock was built in 1859 to protect the island and the roadstead. This fortress has stood guard over St. Peter Port for more than 800 years. The castle contains several museums (Maritime Museum, Story of Castle Cornet Museum, 201 Squadron RAF Museum and Militia Museum) and small gardens (Apothecary’s Garden, Kitchen Garden, and Ornamental Garden). Entrance fee for Adults is 10.50 pounds, while for Children is 3 pounds.

Did you know that the Castle Cornet is so big that can eat up at least 3 hours of your time?

2. Pray in the Little Chapel

Little Chapel was created by Brother Deodat in the year 1914. This chapel is considered as the smallest chapel in the whole of Europe. The chapel went under 3 revisions in total. The chapel’s original measurement is 9 feet long and 4.5 feet wide. Then next is 9 feet long and 6 feet wide. The final revision of the chapel measures 16 feet long and 9 feet wide. However, Brother Deodat wasn’t able to see the finished structure before he died. Entrance fee is absolutely 0! Pay nothing if you enter, but you can give donations.

The chapel has a mosaic style or pique-assiette or picassiette style. The base of it is decorated with the combination of pebbles, seashells and lovely pieces of broken china. The capacity of it is good for 8 people. This chapel has been one of the most popular tourist attraction in Guernsey, St. Peter’s Port.

Did you know that Little Chapel has a shrine of Saint Bernadette?

3. Discover the Facts During WWII in the German Occupation Museum

German Occupation Museum is located near Guernsey’s airport. It is owned and operated by Richard Heaume, a founding member of Occupation Society. The place displays extensive, finest collection of original German Occupation items and documents. The museum uses an audio-visual technology which conveys all the stories experiences of Guernsey locals during the German Occupation. More or less, it allows visitors to discover more about island life under German rule during WW2. Entrance fee for Adults cost 5 pounds while for Children cost 2.50 pounds.

Did you know that the first German aircraft arrived at the Guernsey Airport on June 30, 1940? As this date marked the beginning of German Occupation.

4. Appreciate the Beauty of the Island in the South Coast Cliff Walk

The South Coast Cliff Walk is a 28.5 miles trek from La Vallette to Pleinmont. The cliff requires long hours of the climb since it also has uneven steps. The terrain at the cliff top is perched too which made it a little more difficult to climb. The cliff is considered as the largest natural made stretch in the south coast region of Guernsey.

A wide variety of plants, shrubs, and trees plus a variety of birds as well are found here. The South Coast Cliff Walk is the best way to see the island’s spectacular coastlines which have inspired writers and artists, including Victor Hugo and Renoir, over the decades.

Did you know that Guernsey is considered as a Walker’s Paradise? Even the famous people of all times found their work inspiration in the South Coast Cliff Walk.

5. Get Inspiration from Victor Hugo's masterpieces in the Hauteville House

Victor Marie Hugo is a well-known French author. He wrote the famous novels The Hunchback of Notre-Dame in 1831, Les Miserable in 1862, William Shakespeare in 1864, Les Chansons des rues et de bois’ in 1865, Les Travailleurs de la mer in 1866 and L’Homme qui rit’ in 1869. Hugo was known for all his poetry collections that greatly influenced the music industry. Even if he was already married, he still became a chick magnet during his lifetime. In 1885, he was buried in the Pantheon, a church in Paris, France.

As he was captivated by the beauty of the islands, this French poet and writer decided to build his island home and to spend the remaining years of his life in Guernsey. The Hauteville House is a 3 storey house was built in the old town of Guernsey, St. Peter’s Port. The house includes a wonderful garden too. Then after several years of Hugo’s death, his home was eventually donated by his grandchildren to the City of Paris. Today, this island home of French author has been converted into a museum.

Did you know that the popular Victor Hugo’s masterpiece, Les Miserables, was completed in Guernsey? 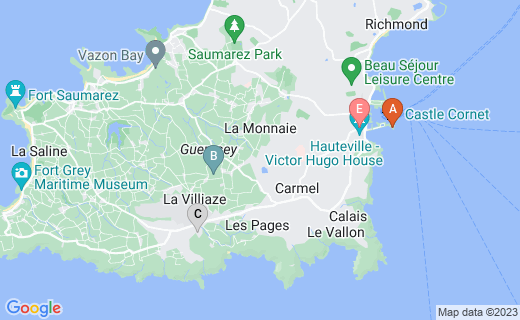 The defence structure of Guernsey.

The smallest chapel of the entire Europe.

The museum displays all WWII relics.

The end of the South Coast Cliff Walk in Guernsey

The house Victor Marie Hugo before he died.

Did you find Guernsey captivating?