What Does the USA Do In Antarctica?

Best and Worst Of the Base Stations

In the first quarter of the 21st Century, American and other scientists are using the continent of Antarctica for studies about a number of concerns, but two important topics are 1) climate and weather changes; and 2) telecommunications and long-term life in outer space. Along the way in these studies, the various researchers of many countries have found other phenomenon, so Antarctica is a place for consistent serendipity.

Antarctica is the one continent on which I cannot say that Indigenous Peoples of any group have lived, although European explorers first arrived in the 1600s. The frigid climate is harsh and at McMurdo Station complex, operated by the USA, only about 200 people overwinter - the rest of the large workforce returns in the Southern Hemisphere's Austral Spring (North America's Autumn).

McMurdo Station is the largest research base on the continent, a complex of at least 100 buildings constructed by early 2013; and, some of the building have needed repairs.

The best known of McMurdo's structures, a large science station, has been featured in several magazines and has needed repairs around the cracking hull. However, several new structures and a science lab (mid-1990s) have been added to America's large complex on the Ross Sea, indicating consistent improvements.

The new large British research station of 2013 is a totally movable oversized train on hydraulic legs and skis instead of wheels. It is called Halley VI and is the sixth iteration of the British station in use since 1956, named for Halley's Comet. Meanwhile, the South Koreans have purchased a new station to make their second research base in Antarctica (see map below) and it also appears to have hydraulic legs. We may have large research stations walking all over Antarctica before long!

The public has in the past largely thought of Antarctica as a sheet of ice with two or three research stations scattered widely, but it is a continent of land covered with ice up to a mile thick, a desert, and home to dozens of research bases. McMurdo remains the largest base, although not the most flashy on the outside, and without hydraulic legs.

It would be great fun to have one of those pseudo-locomotive buildings that can move around, especially if a crack in the ice was coming our way and we needed to escape. Of course, GPS units are mandatory in order to find both people, and now these moving stations as well.

At McMurdo, we have the Crary Laboratory. There, researchers stuydy biological interests, earth and atmospheric sciences, and sealife in a large aquarium. The lab honors the geophysicist and geologist Albert P. Crary (1911-1987), who was the first person to stand at both the North and the South Poles.

The Irish at the South Pole

Sir Ernest Henry Shackleton, CVO, OBE, FRGS (Feb. 5, 1874 – Jan. 5, 1922: age nearly 48) was an Irish-English explorer from County Kildare who led Nimrod Expedition in 1907, the Heroic Age of Antarctic Exploration. He was ill and sent home from Commander Robert Scott's famous expedition of 1901 - 1904. Shackleton led an expedition during WWI and after his ship was completely crushed in pack ice, all persons on board were saved with his help. He returned again in 1921 to set up scientific research, but died of a heart attack aboard his ship before he get to his work in South Georgia, Antarctica. He is buried there, having given much of his adult life to exploring the region.

Ernest more than made up for what he saw as personal failure to complete the first mission and could rightly be celebrated a hero on St. Patrick's Day.

More about Irish accomplishments in history.

The British having seen a few of the birds in their area at the Princess Elisabeth Antarctic Research Station, the International Polar Foundation undertook a 30-mile journey to the sea in 2012 in search of enough penguns to make that scat trail. They were astounded at a giant Emperor Penguin colony, one that had not yet been discovered by humans. Not fearing the human visitors, the birds were very friendly and curious. These types of occurances to the south are stadard fare it would seem.

The British are very exploration-lucky this century! In February 2013, we heard that the researchers from England's National Oceanography Centre found a volcanic vent area just north of the southernmost continent. along with the remains of an old chimney from a period in which the areas was hotter. This area may contain natural resources that we can use, perhaps in industry and medicine.

An Adelie Penguin and His Camera Case

Living in an Antarctic research station to some extent simulates the isolation of outer space living and work, except for the lack of gravity. Living near the South Pole, then, is a way of gathering information to help the US public and private space programs.

In addition, the information researchers accumulate about mining the deep seas in the region for minieral resrouces can help advance the project of asteroid and lunar mining begun by Google with the help of James Cameron and other investors in 2012, and vice versa. James Cameron is known for his own deep sea adventures, which will hopefully appear on film for public audiences.

Russia and China already have permits for deep sea mining, so the USA and England may be a bit behind in this alternative mining race in the seas of Earth. Still, Antarctica cannot be commerically exploited for resources until after 2041 (see link below).

Military drills for the USA will likely include material on mining operations at some point. In early 2013, they included offloading fuel in the Department of Defense Operation Deep Freeze. This cargo held about 6 million gallons of jet fuel and deisel gasoline, along with 7 million pounds of food to McMurdo Station, which has been around since 1955.

The British arrived in 1956, close behind us; but we actually started in 1939. However, an early expedition to the Big South was performed in 1872 - 1875 by the British under Sir John Murray -- We were in Reconstruction after the Civil War and the South Pole was not on our exploration radar screen. The United Kingdom claimed rule through James Cook at South Georgia in 1775, during the American Revolution. Earlier still, a businessman from Britain saw Antarctica in 1675, while we were struggling with Native American issues, starvation, and colony building.

US Navy Captain Charles Wilkes led our first Navy expedition to Antarctica in 1929, foll wed by the famous. Navy Admiral, Richard E. Byrd, in 1929. In 1930, Byrd flew over the South Pole. Over 15 years later, after establishing base camps, Byrd led Operation Highjump in 1946 to bring 4,000+ people and several ships into the Ross Sea. McMurdo grew out of all this and in 1955, the US Navy ran its first chapter of Operation Deep Freeze.

Today the Armed Forces of the US in the Antarctic region are under the jurisdiction of the Joint Base Pearl Harbor-Hickam, Hawaii. Satellite images from space undoubtedly aid the military in forming new defense stategies as well as suggesting methods for dealing with climate change; as well as discovering new resources, since whiteouts prevent much of that activity on the ground.

The US Pacific Command and US Antarctic Program Support

How To Emerge From An Ice Age

A South Dakota State University Professor, Jihong Cole-Dai, is an expert in chemistry and biochemistry. He and graduate students in 2012 looked at veritable slices of Antarctica dating back about 17,500 years to see what went on at the end of the Ice Age. They work with the West Antarctica Ice Sheet Divide Ice Core project in hopes of finding ways in the future of helping control unwanted climate changes. [South Dakota State University (2013, February 8). Studying ice cores from West Antarctica for clues as to why the Earth began to emerge from the Ice Age. ScienceDaily. Retrieved February 10, 2013, from http://www.sciencedaily.com­/releases/2013/02/130208182659.ht]

In other studies, scientists have looked at salt levels in dry water basins like Don Juan Pond on Antarctica in order toi gain some ideas about similar structures on Mars and the probablility of water having gathered in bodies like salty ponds and lakes there, with implication for settling the planet.

Australia is not the only country or continent that is home to strange widlife like that which puzzled Darwin. The sea south of Australia and the South Sea is teeming with odd forms of wildlife as well, but he never studied those. Perhaps island isolation is not the only thing that leads to such species. Perhaps we should just enjoy them or continue to study them without destroying them.There is much to enjoy and to learn in the Southern Hemisphere.

The Ross Sea is full of wildlife and the local ecology depends on phytoplankton. Animal adaptations in this region are the subject of many studies and a type of fish here seems to have antifreeze in its bloodstream. National Geographic and the National Science Foundation of the USA will provide a series of articles about all of this in 2013 from Cassandra Brooks at Stanford University.

Many countries join forces in study projects like these and we will likely hear more about them as more people go down to look and report. McMurdo is located at the Ross Sea, so the US is in the thick of it.

The Ross Sea Between Australia/New Zealand and South America 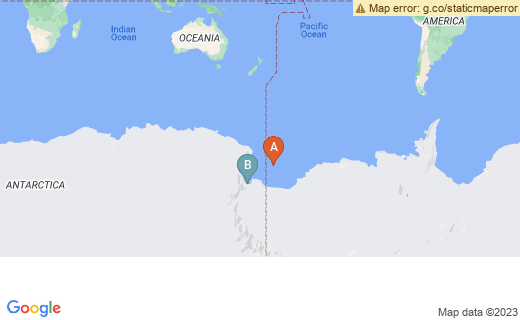 Cruises As a Local Tourist Trade

TRAVEL AND TOURISM 2013: A 1961 Antarctic Treaty has no expiration date and limits the number of tourists to the frozen desert of Antarctica. At any point in time, only 100 visitors from any single ship can visit the shore. Some visit, while others are taken out in smaller boars to view local wildlife. In 2013, a total of 46 countries have agreed to this treaty. USA and UK were among the first to sign. 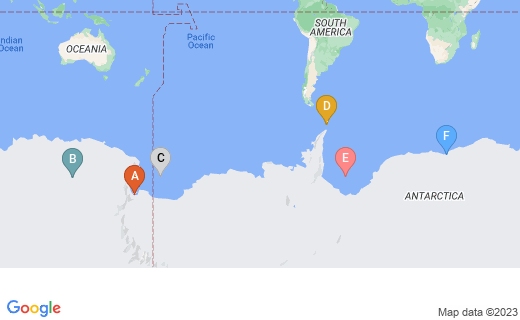 The South Pole moves 33 feet per year and is not shown on Google Maps. However, a ceremony and a marker are placed every New Year's.

King George Island - near the Korean's research base, King Sejong at "D" behind "G."

The Research Stations In the South Shetland Islands Alone:

These stations in the South Shetlands are all to the east of McMurdo and the Ross Sea, located south of South America.

A few additional field camps are also located around the South Shetland Islands. Deception Island is a big draw for tourists as well, with hot springs and odd plants and animals. 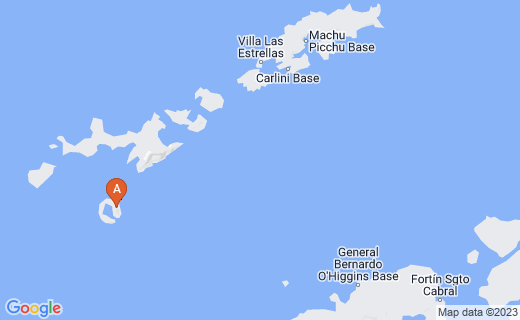 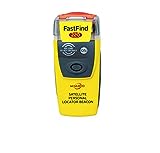 Plubukto was removed from the American Psychiatric Association's DSM series of diagnostic manuals in the 1980s. It was defined popularly as a culture-based form of extreme cabin fever of the Far North.

The condition combned cabin fever, snow blindedness, hypothermia, a psychotic break, and additional conditions into a mental health event that caused death. All the culture-based mental illnesses were removed from the DSM at once, probably on the basis of possible racisim. However, plubukto still operates, and not just among the Inuits and their related First Nations and other Native North Americans (reference: Patty Inglish; ©1994, 2005, 2013). Plubukto could result in Antarctica among the growing number of research scientists and other staff living and working in confining cold weather conditions..