Dominica is a beautiful Island in the Caribbean. It is an island nation in the Lesser Antilles region of the Caribbean Sea, south-southeast of Guadeloupe and northwest of Martinique They are a parliamentary republic. They use the East Caribbean Dollar and 1 US Dollar is worth $2.70EC. The name is Latin for Sunday and is pronounced DOM e Neek a. Everyone there speaks English. You can only get to Dominica by boat or plane.

My Trip to Dominica

I was not able to get a direct flight from Cleveland so I flew from Cleveland to Miami, then Miami to Puerto Rico and from Puerto Rico we flew to Dominica. Dominica does have an airport but the runway is not built for huge jets so we had to fly on a turbo prop like you would fly on for small commuter trips in the states before they started using commuter jets. Once there customs was pretty simple. Just a few questions and I was on my way. I stayed in Roseau which is on the opposite side of the Island from the airport I flew into. I stayed at the Fort Young Hotel, which i will tell you about later, and they provided transportation from the airport to the hotel. The ride was a little over 2 hours in a van on roads that zig zagged through the mountains on the island. There were beautiful views of the island on this drive but some of the roads were a little scarey. There were sharp blind turns and the road was barely big enough for two cars. Sometimes the van would be on the edge of the road and I could look straight down hundreds of feet.

Once I arrived at the hotel I checked in. While checking in I was offered Rum Punch. It was delicious and I later found out that any drink on the island with the word punch in it means it has rum. My room at the Fort Young Hotel was nothing special but I did have a balcony that looked out over the Sea. There was a nice pool 5 feet from my room, however the hot tubs were not working while I was there. The hotel used to be an old fort and some of the fort still existed. It was the best place to stay in Roseau. The hotel had am open air bar with a multitude of drinks and either soccer or kricket on the tv. The food at the bar was decent. The hotel also has a restaurant. The food there was decent but not worth the price. The hotel also has an agent that you can book all the tours and activities you want to do. There was way more to do then I could fit in in 10 days!

Surprisingly for being a tropical island the food kind of sucked. Maybe it was because I did not know where to go but it was hard to find any fresh fruit or seafood their. I actually ate pizza hut a few times because I was so dissatisfied with the quality of food there. However I did found a fresh market at the opposite end of the street from the hotel. Also there was 1 amazing restaurant near the hotel. I wish I could remember the name of it but it was a few hundred feet from the hotel on the second floor of a building. You can see it when you walk out of the front of the hotel. The food there was super fresh and amazing! The staff was outstanding!! I never got his name but the black guy with the dreads that worked there as a waiter made sure everything was perfect every time. The meal was about $50 a plate including desert but it was totally worth it!! I am glad I found that place! There was also a small sandwich shop I accidentally found inside a clothing store. I had to walk through the clothing store and out a back door to get to it. It was in a little alleyway between 4 buildings and the door in the clothing store is the only way to get to it. There are only 4 tables but the food was good and cheap. Unfortunately its only open in the afternoon and is hard to find.

Roseau is a Cruise ship port. The ships anchor right near the Fort Young Hotel. When a cruise ship is there all the shops and restaurants are open as well as an open air mall. It can get a little crowded in the area but when the cruise ships are gone the town is kind of empty and some of the shops close. 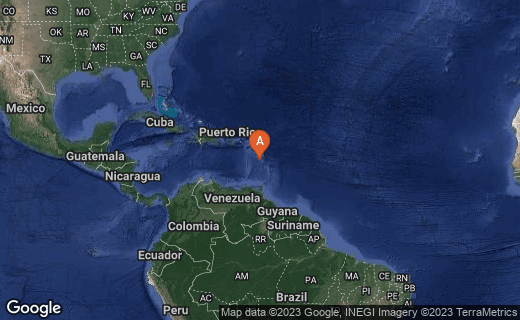 This is where I stayed in Dominica.

If you like hiking, which I do, then there is tons of hiking to be done there. They even have a trail that goes from one end of the island to the other over the mountains but I did not have time to do that. There are tons of "trails" through the rain and cloud forests. These "trails" are kind of rough. Basically people just cut paths through the forest. When you are climbing a hill the just put logs in as stairs unless there are roots there. You will find out real quick what kind of shape you are in on these trails! You can hike to awesome water falls and even swim in some of them. Swimming in the water falls was awesome! There is one hike to the Stinking Hole. Its a big hole in the ground that is way out in the forest. Bats roost in it and it really stinks. But it was really cool to see! One of the best hikes and a must see is the boiling lake.

The boiling lake is a caldera that is full of water. The water is literally boiling it is so hot. IT is a touch hike to get there. With 1000 foot elevation changes. It was to tough of a hike for Chuck Norris and he took a helicopter there. The total hike is 14.2 miles long. It is well worth the hike! You see some amazing views. Just make sure you take a guide! MAKE SURE YOU TAKE A GUIDE! The trail is sometimes non existent and depending on the weather it is impassible. Only a guide will know if it is safe. There are also hot springs along the hike you get to swim in and at the end of the hike is an Amazing natural spring you get to swim in. It is super cold water but feel awesome!! Plus its where they filmed on of the scenes from PIrates of the Caribbean.

Dominica has some amazing snorkeling! It also has awesome scuba diving however I have never been diving. There are awesome reefs you can snorkeling on. Dominica also has the champagne reef. It is a reef that constantly has air bubbles flowing up through it from volcanic vents and makes it look like you are swimming in an aquarium with a bubbler or swimming in champagne. To go snorkeling there you can go through a dive shop where they will take you out on a boat and take you a few places in one day. Its a great trip. However you can also swim right out to the Champagne reef on your own. All you have to do is get a ride to the reef area south of town. Then you pay a small fee and you get to walk down a long bard walk along the coast. At the end of the board walk is the reef area. You can spend as much time there as you like. There is even a beach area where you can sit and watch the iguanas run around in the woods. If you like snorkeling or diving this is definitely a place you need to go .

There is so much more you can do in Dominica!! There is an awesome boat trip you can take where a guy paddles you up a river in a row boat. You go pretty deep in the forest and it looks like you are in the Pirates of the Caribbean. Probably because they filmed a lot of the movie there. They take you to an awesome bar in the middle of the forest. You can wander around the town and the people are very friendly. Its also a very safe area for tourists. Roseau has great botanical gardens you can walk through. You can even go whale watching. If you are looking for a great adventure that is relatively cheap or just an awesome vacation check out Dominica. You wont be disappointed! If you love the out doors you should make this your next destination!

Thanks for reading my hub! I hope you enjoyed it.

Some stairs on a trail

These are also considered stairs on one of the trails