Potatoes are a common food in the United States and around the world. Idaho has a long history of providing some of the most consumed potatoes. The Idaho Potato Museum is designed to provide visitors with a unique experience based on Idaho's Famous Potatoes. People are able to learn about the history of the potato, the growing and harvesting process used by farmers and much more. Visitors also learn about potato trivia, nutritional elements, and other important potato facts.

It was not a farmer who was responsible for the introduction of the potato into the state of Idaho; it was a Presbyterian missionary. His name was Henry Harmon Spalding. In 1836, Spalding established a mission in the northern panhandle of Idaho in an area known as Lapwai. His goal was to provide Christianity to the Nez Perce Indians. Spalding wanted to show the local Native people how they could provide food for themselves with the use of agriculture. He felt this would be easier for them than hunting and gathering. The Native Indians are credited with being the first ones to sell potatoes on a commercial basis. This crop is what they used for trading to get clothing and a number of other goods provided by the pioneers moving west on wagon trains. The potato crops were a huge success but are no longer grown in the Lapwai area of Idaho.

During the 1840s, a number of Mormon colonists settled in the Salt Lake Valley. Mormon farmers were instructed to establish a colony in the area north of the Salt Lake Valley. This was known as the Cache Valley. All of the Mormon colonists who went believed they were still in the Utah territory. All of them started to build their farms. Potatoes were one of the first crops the Mormon farmers planted. This crop was very successful. The initial planting of potatoes was done approximately three years before the territory of Idaho was established. The soil is rich with volcanic ash. It enabled farmers to raise more potatoes than they needed. It was a crop that regularly provided them with a good source of income. The potato is currently still grown in this same area.

In 1882, the U.S. Department of Agriculture estimated approximately 2,000 acres of potato crops were harvested. The average price per acre was $1.67. The first year of a potato market, the value of the crops was placed at $250,000. The first time the value of the potatoes in Idaho were valued at over a million dollars was 1904. The value was estimated to be over $1,325,000. Idaho was admitted to the Union and became the 43rd state in 1890. During this year, the Idaho potato was getting a lot of attention in the world of produce. Frank Drake won a prize of $125 in 1890 for having the third largest yield of an acre of potatoes in the U.S. Drake was a well-known rancher in Idaho. He claimed to have developed a seed potato that was the most prolific potato known.

The structure where the Idaho Potato Museum is located was originally called the Oregon Short Line Railroad Depot. The building of the structure started around 1903 and was not completed until 1913. When construction of the building was complete, it was purchased by the Union Pacific Railroad. There was a discussion among local residents who were involved in the potato industry. They wanted to find a way to showcase the importance of potatoes and provide important potato information. The Union Pacific Railway donated the railroad station building in Blackfoot City. This is when the idea of turning the structure into a museum was discussed. It was then agreed upon by city officials that this would be the location of the Potato Museum.

When work began to create the museum, the building was considered uninhabitable. It had no working restroom facilities and other shortcomings. A community group effort was made to clean the building up and get it ready for the opening of the museum. In 1988, a trial museum opening took place. It was estimated 2,000 individuals from the local and surrounding communities attended the opening. The trial had no actual displays. It only offered a number of signs with ideas written on them. The writing on the signs described what was planned to display at that spot in the museum. Volunteers worked to prepare the museum for tourists. It was ready in 1989. During the first year, the potato museum was open approximately 5,000 people came to see it.

The displays found at the Potato Museum were donated from a number of community and commercial organizations. A display at the museum that is very popular is the world's largest potato crisp. It was donated to the museum by Pringles, a company owned by Procter & Gamble. The potato crisp measures 25 inches by 14 inches and has a weight of 5.4 ounces. It is estimated to have over 900 calories and be equal to 80 regular potato crisps from Pringles. A potato crisp is created from processed and dehydrated potatoes. It is formed with special machines designed specifically for this type of food processing. A potato chip is considered to be a fresh potato that is thinly cut and cooked in vegetable oil.

There is a hall of fame at the Potato Museum. A number of local people and businesses have been inducted into the Potato Hall of Fame. Each of the inductees has made major contributions to the success of the Idaho Potato. This could be done by using the potato as a food or as a product. In 1997, M.L. “Gus” Gustaveson was inducted for building the customer base for Sunspiced Potatoes. In 2009, Daniel Polatis and Richard Polatis were inducted for many years of work as potato farmers and owning a successful family farm business. Albert Wada and Chris Abend were honored for the farming, potato shipping, as well as their dehydration process development and more.

Attached to the Potato Museum is a gift shop called the Spud Seller gift shop. It provides visitors with a variety of merchandise that has an Idaho or potato theme. At one time, the shop was very small and only sold items on a consignment basis. A few years ago, the shop was able to purchase items from a number of commercial wholesalers. Today, people can visit the gift shop and purchase everything from potato cookbooks to potato bubble bath, potato hand lotion as well as T-shirts, magnets, postcards and more. 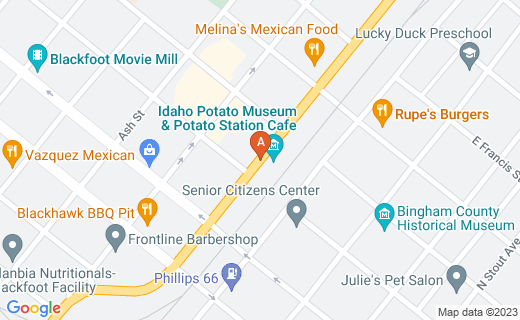