What Is Monument Valley?

Located in the Southwest, on the Navajo Nation, Monument Valley is a naturally made formation from the erosion of the Rocky Mountains. The eroded material became sandstone and the formation in the valley canyons from wind and water around the geologic swellings. It crosses into the states of Utah and Arizona.

Popular movies have been filmed in Monument Valley. Here are a few more well-known films that included scenes filmed in this unique natural setting:

The Native Story of How Monument Valley Came To Be

There is a story passed down through the generations of the origin of Monument Valley. There was a first Man and first Woman. They had Twins. The Twins were taught by Spider Woman some spells and prayers. When the Twins went up against some monsters, they turned them into the immense stonework that stand in the valley today. The Twins went on to populate the Navajo people, also known as the Dine (pronounced Dee-neh).

Where Is Navajo Nation? Where is Monument Valley?

The Navajo Nation is comprised of 16 million acres. It crosses Arizona, New Mexico, and Utah areas. It is the ancestral homeland of the Navajo Indians. Though Navajo were forced off their lands by the US government, they were later allowed to return to it once more. The Navajo are one of the few United States Native American (Native Indian) groups to have retained a portion their original homeland, referred to commonly as "the reservation" or, by native people who live there, as "the rez." This reservation is the largest of all reservations and there are more than 180,000 people who live in the Navajo Nation.

Monument Valley is a 30,000 acre portion of the Navajo Nation dedicated as a Navajo Park. Unless you have a Navajo with you, you may not venture off the scenic trail or designated visitor areas. The Navajo Park is located on the borders of Arizona and Utah.

Most people recognize Monument Valley from Hollywood films. At the Visitor Center, tourists are able to learn how the natural formations were geologically formed. Visitors may also request hiking permits. A modest admission fee (for ages 10 and over) is only $5 per person. The overnight camping fee is also very affordable at $10 a night.

Some popular places to visit in the park include:

Tours are offered by guides:

Each year, the Navajo Nation hosts the Monument Valley Balloon Event. This three-day event starts on a Friday, ends on a Sunday, and includes so much more than balloon rides. There are dances, lectures, prayer ceremonies, singers and Sunday service. There is a trail walk (no strollers). Be advised that temperatures vary greatly from morning to evening so dressing in layers is suggested and wear appropriate shoes for the guided trail walks.

Winters are as cold as 25 degrees Fahrenheit. Summertime temperatures soar to the high 90s and, at certain times, 100s. Use sunblock and carry more water than you think you will need... because you will need it!

* Be respectful of the Navajo. NEVER spread ashes of the deceased on Navajo lands. * 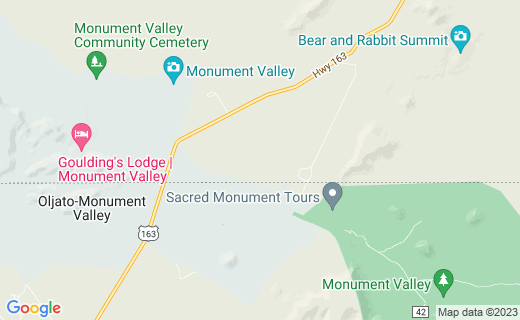