Petra is an ancient city in Southern Jordan, thought to have been built (in its current form) around two and a half thousand years ago in the fifth century BC. Whilst it is believed that much of the buildings that make up the Petra that we are all familiar with, it is thought that the city may have been a base for traders for several hundred years before this.

It was the Nabatean people who knew the lay of the land and who had mastered survival in this harsh landscape who capitalised on the strategic location of Petra on a key trade route through Asia. With Nabatean influence, Petra became a major trade centre and the Nabateans amassed untold riches with which they constructed more and more elaborate structures within the city - most notably the iconic Treasury building and the building known as The Monastery.

Today, Petra is a major international tourist attraction receiving hundreds of thousands of visitors each year. However, whilst numbers improved in 2017 to around 600,000 the on-going conflicts in the Middle-east, especially in neighbouring Iraq, Israel and Syria have all affected tourism in Jordan.

And that's a real shame as Jordan is free of conflict and is a perfectly safe country to visit. The Jordanian people are incredibly hospitable, friendly and welcoming and once you're inside the country you would have no idea of the conflicts raging across the border.

But, with planes being shot down over neighbouring Egypt, rogue missiles and the ever-present threat of terrorism and violence against westerners, tourists have been staying away from Jordan 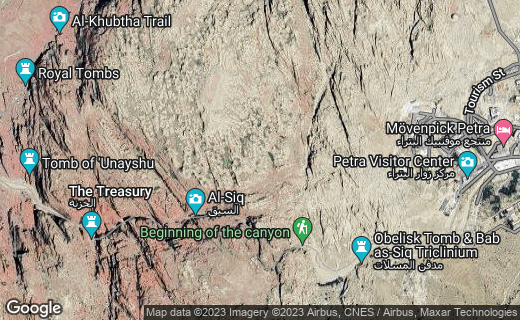 On the flip side, if you do make the effort to visit Jordan and visit Petra you will find a special place that is not overrun with tourists. And let's face it, Petra has stood for over 2000 years so it's not like it's going anywhere anytime soon. Hopefully the problems in the Middle East won't last forever and Jordan can get itself re-established on the global tourist map.

There are many ways in which you can visit Petra. With all of the issues in the region, as highlighted above, some people may feel more confident in joining an organised tour or having a private guide and driver. Of course, you can do this but it will come at a price.

If you want to save a bit of money and give yourself more time and freedom to do as you please, I would suggest you do what we did and hire a car.

We flew from the UK to Jordan's capital city, Amman, flying with the national carrier, Royal Jordanian. The airline is quite mediocre to be quite honest but there should be a number of airlines to choose from depending on where you're flying from. We flew from Manchester, UK.

We rented a car from a company called Monte Carlo Rent A Car. These guys are absolutely fantastic. Rather than rent the car from the airport we took a taxi to our hotel in Madaba where we would spend our first few days in Jordan. On the third day Monte Carlo delivered the car to our hotel and we set off on our long drive down the Desert Highway towards Petra.

The drive from Madaba to Petra takes around 3 hours (from Amman to Petra the drive is around the same time). We travelled in September when the worst of the summer heat had passed. It was still hot though so it was good to have a car with decent AC. I would also suggest that you don't attempt this journey in July and August when the daytime temperature can frequently be above 40 degrees celsius and the risk of blowing out your tyres on the Desert Highway is significant. I've never seen so many blown tyres on the side of a road!

Amman aside, where driving is absolutely insane, driving in Jordan is a breeze. It's difficult to get lost if you're travelling on the main highways, of which there is one main one that runs north to south. When travelling south on the Desert Highway you will see sign posts directing you towards Petra.

Before arriving at Petra you drive through a sprawling town called Wadi Musa. It's not a great place and is full of rip-off tourist joints. Make your way to Petra and park up in the car park.

Tickets to enter Petra can be bought on arrival from the ticket office. There are different ticket prices for foreign tourists and domestic travellers which I think fair enough. If you can afford to travel to Jordan from another country then you can afford to pay the entry fee (equivalent to around $70US).

As of 2018 the prices for foreigners are as follows (JOD = Jordanian Dinars):

So before you travel you need to have an idea as to how long you'd like to spend inside Petra. Bear in mind that's it's not all about what you see, it's about making sure you have time to wonder off and enjoy some quiet time and get a feel for the place.

How Long to Spend at Petra

For me, I decided that I would purchase a 2-day ticket to enter Petra. After driving down from Madaba in the morning I arrived at Petra at around 1pm. At this time the sun was beating down relentlessly from a cloudless sky. It was super hot and there was little shade around. We knew that we would struggle to have the energy to get round everything we wanted to do while it was so hot so we always planned to return early the next morning and get in before the crowds and before the day had chance to heat up.

After the ticket office you walk over 1km to get to the start of The Siq (the passage leading to the The Treasury building). Men will offer to take you to the Siq on a horse and will tell you that it's included in the ticket price. Technically, they're right: it is included in the ticket price but they aren't actually getting paid for it. They will expect a tip from you and whatever you try to agree in advance will likely be disputed when they drop you off.

I avoided all this unnecessary hassle and just walked to the Siq.

Walking through the Siq is a great experience. You really get a sense of the history and you know that it's a special place. It's also cool in there as the sun struggles to force its way into the narrow channel. One minor annoyance is that you frequently have to get out of the way of the chariots that are ferrying tourists down to the Treasury.

All of the talk of declining tourist numbers at Petra proved to be true. There were times when we were the only ones in the Siq and we managed to take some fantastic pictures.

The moment when you round that last bend and the majestic grandeur of the Treasury opens up in front of you is nothing short of breathtaking.

While the ground level view of Petra was awesome we had seen photos of a view from above. We sought out the path that would take us there and after a 90 minute hike we finally came upon the cliff top that over-looked this fantastic wonder of the old world.

There was a little bedouin tent at the top of cliff and he invited us to sit with him and chat for a while. This was a fantastic experience and was so calm and relaxing being the only people up there looking down on the crowds below us.

We rounded off day one by checking out some of the tombs and not straying too far and then made our way out shortly before dusk.

We spent the night around 6km outside of Wadi Musa in a desert bedouin camp. It was a fantastic experience and perhaps I shall write about that another time.

Visiting the Monastery at Petra

On day 2 we set out nice and early before the sun had climbed too high in the sky and before the crowds of tourists had arrived on their packed coach tours. Our plan was to do the 2-hour hike up to the site of The Monastery. Note: the thing about Petra is that it is actually really spread out. Whilst all of the main feature images are of the Treasury (ie the building from Indiana Jones), the site itself is huge.

One the way to the Monastery you will walk through the old Petra city centre which was established under Roman rule and features many Roman architectural traits including rows of stone pillars and columns, fountains, statues and paved streets. And of course a great amphitheatre.

Also along the way you will get many offers from bedouin offering to take you up to the Monastery on a donkey. To be honest, even through donkey's have historically been used by humans to carry things, I do think it's a bit cruel - especially in the heat. Besides, I'm young, fit and healthy so I'm quite happy to walk.

After hiking for a couple of hours along a route that wasn't particularly challenging, we got our first view of the magnificent Monastery building. Words cannot describe the sheer size and scale of it. It's huge! We saw some rocks facing it about a 100 yards away so we decided to scramble to the top of this and sit looking across to the Monastery. To our surprise there was not a soul around. We sat there and took in our surroundings for a good hour.

I took loads of pictures with my Sony a6000 camera and sat and let the sun bronze my skin. This is my camera of choice and I have been very happy with it. Previously, I would look back at my travel pictures with disappointment but since upgrading to this camera I feel very proud of my photos and have even been able to make some money from them on stock photo websites.

Eventually, we decided it was time to leave and headed back down before the got scorched under the midday sun. We had a good look around and when we were happy that we had done all there was to do we left and headed back to our car, with our Petra experience complete.

Travel in the Middle East

Would the trouble in the Middle East put you off visiting Jordan?