How to Organize a Tiger Safari in Kanha National Park?

The core zone is the critical conservation area, and much of the tourism takes place here. For tourism purpose the area is divided into four zones namely:

Kanha Range is no more a premium zone as mentioned earlier. The gate fee is same for all the zones. A forest guide has to accompany the jeep inside the park areas. The vehicle entry is limited in all zones. The excursions are on fixed routes as assigned in the permit. The rides are conducted on open jeeps that have been registered with the management.

In recent times tourism is allowed in some areas of the buffer zone. Two more such zones have been notified for safaris they are Sarhi and Khapa. The buffer zone tourism has no limit to vehicle entry, and the gate entry fee is also less. The rules are practically the same as in the core area.

No trekking is allowed in the core area. Hence a nature trail has been established which begins from Khatia Gate and goes along the Banzar River. Though tigers and other animals are encountered often, the trail is excellent for birding as well.

The reporting has to be done at the Khatia Gate and the safari timings remain same as that of the core tourism zone.

Night Safari in the buffer zones has been permitted from this year in 2017. Only limited number of vehicles are accorded the permits. The timings are from seven pm to 10 pm. No flash light is allowed and the safari has to be conducted with the forest guard on the jeep. The permits have to be obtained at the gates on first come first basis.

How to choose safari zones?

How to choose safari zones?

Well if you are booking a gate entry quiet late then just book whatever zone is available. If you go for gate entry booking early then you should read further.

Your stay is for recommended for three nights and six game rides. If so then subscribe for Kanha and Kilsi Zones leaving one visit to Mukki and one visit to Sarhi in your program.

If you are a wildlife photographer, I would suggest make more visit to Mukki and include visit to Kisli and Kanha. This is aimed at getting more opportunity for swamp deer photography besides the tiger.

The route to Mukki goes through the Kisli Zone and offers opportunity to sight many more animals. Therefore you can add Sarhi Zone for excursions on other day. This zone offers good chance for photographing Sambar and Four Horned Antelope. With snaking rivulets, large meadows and mountains Sarhi is the most picturesque zone in the tourism area of the park. It is ideal for habitat photography. The tiger sightings in this zone have increased bringing it on par with others.

In order to enter the park on tiger safari it is necessary to obtain a permit. The permit contains particulars of the tourists and the vehicle. The tourism zone is also mentioned along with the guide name and number.

The permit can be acquired from the booking center which is usually near the gates. Else one can also acquire it online from the MP Online Portal belonging to MP Government. Booking starts one hundred twenty days before the date of excursion.

Since there is a limitation on vehicle entry one should book in advance. The job of entry booking is often performed by hotels in Kanha since they organize the safari.

During the issue of permit one needs to pay the required sum, and submit details of the tourists. The vehicle details can be added during the entry. The number of persons have to be mentioned along with age, address and citizenship. One also needs to carry a photo identity like driving license, pan card or passport as in the case of foreigners.

Changes Made in The Entry Fee

The entry cost has become same for one and all. Earlier it was higher for foreigners. During booking, one needs to mention the preferred zone, but it is subject to availability. Shared safaris are also possible as of October 2016 details of which are available on MP Online Portal.

The jeep can be hired locally or can be engaged from the hotels. Jeep hire from the association is available on the basis of a roster system. There are many jeeps available for hire near the Khatia Gate in Kanha Zone.

*This information also pertains to all National Parks in MP.

In this case you book a single seat after making payment for a single person. Five more visitors will be added to the permit at the Gate. The cost is then shared between all the visitors.

Addition to the Permit

Adding more visitors subject to maximum six is possible only forty eight hours in advance after the payment of Rs.1500.00.

It is possible to cancel permit but it is subject to a cancellation fee.

The tiger is the most charismatic animal found in Kanha. Another star species found here is the Hard Ground Barasingha or swamp deer, the only race in the World. This animal is extremely rare and critically endangered. About 500 plus animals survive at Kanha.

*Recently in year 2016 some fifty swamp deer have been trans-located to Satpura Tiger Reserve also in Central India.

Deer are common and the spotted deer (chital) is found in greater abundance than sambar and barking deer. Two rarely seen species are the four horned antelope and the mouse deer. The latter is nocturnal. It was photographed only once recently. It's last sighting dates back to fifty years, more or less.

The leopard is much less seen as compared to the tiger due to extreme competition which is not in favor of the former. Bison, sloth bear and wild dogs are seen with regular frequency. Common sightings are wild boars, Hanuman Langur, jackal and many birds like the peafowl, parakeets, drongo and others. The park is home to twenty two species of mammals, 250 plus avian species, reptiles and thousands of species of insects.

The park safari begins at dawn whence the sun has started rising. The early morning period offers the best opportunity to chance upon the tigers on the jungle road in the forest. Tigers make their movements at predawn in the cool hours.

Hence making an entry in the tourism zone at the earliest is advisable. This means you have to be at the gate at least half an hour or before. This way you can clear up the gate formalities early and be ready for the excursions.

The evening drive is relatively shorter, and hence you should make most of it by entering in time.

With the help of your naturalist plan the trip in advance, specially the route to be chosen. Those entering the park without naturalists can take help of the forest guide accompanying the vehicle.

You can now spend whole day on excursions in the park. You have to book in advance and may exorbitant sum which suits wildlife photographers and film makers. This is termed as full day safari the booking method is same as described earlier.

One seat in the back is reserved for the forest guide who instructs the driver where to go. The safari begins as soon as you enter the tourism zone. As you enter dense forests and wade through the adjoining grasslands - some grasslands interspersed with water bodies can be seen. You should be very attentive as these niche ecosystems harbour plenty of wildlife and birds.

Kanha Tiger Reserve does not have very large expanse of grasslands as compared to savannas, but nevertheless they are the best places to see the deer and the tiger. Maximum wildlife sightings take place from dawn to around 9.30 am, and in the second round towards the dusk when the Sun simmers down. Therefore more effort is put up during these spans of the day. Normally a naturalist accompanies you from the hotel. The forest guide, naturalist and the driver together engage in searching for animals and birds hidden in the canopy or in the grasslands.

You can do your bit by keeping alert, following the instructions and the rules. Indian wildlife is very secretive hence you have to be very patient. There is an element of surprise which can fetch a handsome tiger or a charismatic bird and other animals.

Choosing the best place to stay is very important for a successful safari. But finding one is easier said than done, There are many options for finding suitable accommodation in Kanha National Park.

One can find a referral for a good hotel from a friend or relative who has already been here. The other option is to contact a tour operator based in MP. There are many travel portals that contain hotel reviews which can deliver useful information about the resort hotels.

One can also search online for accommodation websites that offer a booking option. There are many lists of hotels in Kanha available on the Internet. Some of them are informative and help you choose the right option. Before finalising the property one should talk to the management for full information regarding the facilities and amenities provided.

The accommodation in Kanha ranges from budget to expensive five star properties, hence you should make sure of the deal before hand. Always ask for discount whence booking directly, the agent commission should go to you which is usually 15 percent.

The tiger reserve is approachable from Jabalpur, Raipur and Gondia. The easiest access is from Jabalpur which is a rail head and an airport. The airport is connected with New Delhi and Mumbai flights. The timings change sometimes hence one should visit the company websites for accurate information.

The drive to Kanha from Jabalpur is about 165 km of good roads. There are many buses that ply between Jabalpur to Mandla (96 km) and some go to the park as well which is 69 km onward.

The park is closed during the monsoon from July to mid October. Evening safari is closed on every Wednesday. 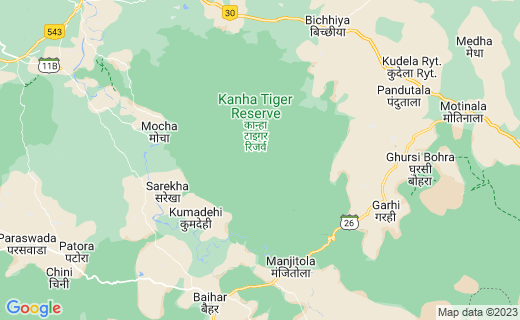 Though Kanha National Park has large number of tigers on some occasions they are not seen. The tourists should not be disappointed since there is much more to experience.

Near By Places of Interest

Phen Micro Core having an area of hundred sq.km is about two and half hours ride from Kanha on Raipur Road. It is home to tigers, leopards, sloth bear, wild dog and spotted deer. The pristine forests are ideal for tiger safaris and birding. Safari permits are issued from The Field Director Office at Mandla Township.

The destination is about 35 km from Kanha and harbors good number of pythons. This is ideal place to see the constrictors in their natural habitat.

Is Tourism Harmful For The Tiger ?