Renoir and Highlights of the Phillips Collection: A Washington D.C. Family Day Trip

The Phillips Collection opened in 1921 as America's first museum of modern art, and it is still considered one of the premiere places to see such masterpieces. The building houses almost 3,000 pieces of art, though I don't think it's big enough for all of them to be on display at the same time.

The museum is a bit off the usual tourist path in Washington D.C., as it isn't near the Mall. It is located a few blocks away from Dupont Circle in northwestern D.C. and well worth the trip!

Our family capped off our visit to Washington D.C. with a trip to the Phillips because my wife really wanted to see Renoir's Luncheon of the Boating Party, which many consider to be the highlight of the collection. And we agree -- it is a superb painting that needs to be seen in person to be truly appreciated. But there are plenty of other pieces in the museum that are very good, so please plan on spending a few hours wandering through the expanded home turned gallery.

The Prize of the Phillips Collection

This Renoir masterpiece really jumps out at you as soon as it comes into view on the second floor. It is so bright and lively that it draws your eyes in from across the room. It is also a large work -- 4.3 feet by 5.7 feet -- so it is really conspicuous.

There are so many interactions occurring between the people in the painting that it captivates you. We stood for minutes examining the painting, and then when we found out one of the museum's workers was going to hold a discussion on the piece we settled right in for the talk. About 15 visitors also were there.

The museum worker asked how many people were surprised to find the painting here, and a good number of people raised their hands. That actually took me by surprise, because the Renoir painting was just about the only thing I knew about the museum!

The painting is luminous. Reproductions in books just don't seem to capture the liveliness of the colors as well. The worker says all the people in the painting have been identified except for the man in the middle looking at the girl sipping from the glass, and most had been friends or people Renoir knew.

She pointed out some of the changes that Renoir made while he painted -- there's evidence the man in the top hat was originally facing forward -- which changes the whole aspect of the painting as being a series of conversations.

There's so much going on in this work that there has been much analysis done on it. For some analysis see here.

My review of Luncheon of the Boating Party is simply my own opinion. There have been a number of in-depth books written on the painting, with many available on Amazon.

If you are interested in learning more about Renoir's masterpiece, please check out this book. Thanks. 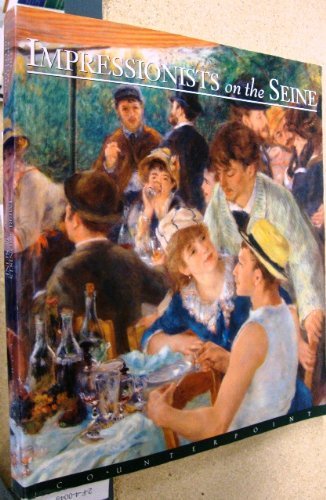 Impressionists on the Seine: A Celebration of Renoir's Luncheon of the Boating Party
Buy Now

''For over 30 years I made periodic visits to Renoir`s `Luncheon of the Boating Party' in a Washington museum, and stood before that magnificent masterpiece hour after hour, day after day, plotting ways to steal it.''

--Actor Edward G. Robinson, known mostly for his gangster roles in the movies.

The Road Menders Stands Out

The rooms nearest Luncheon of the Boating Party contain the best of the rest of the collection. This is where they have placed the works of Paul Cezanne, Van Gogh, Picasso and a number of other truly magnificent artists.

I really like the Road Menders, a Van Gogh piece from 1889 (shown here). In many ways this is a typical piece by the artist, with a similar perspective of a road leading away and indistinct figures on the canvas. But the trees seem to break up the picture in a way that almost overpowers the scene, making it hard to figure out exactly where to put your gaze. A really well-done work.

Cezanne's Seated Woman in Blue 1902-1904 is too severe, too dark for me, while Picasso's The Blue Room from 1901 was more interesting. The painting isn't as far out there as Picasso's later work, but even in this work there is a sense of the unusual. Maybe it's the way the poster of the girl melts into the wall, making it seem like she is floating. Or the indistinctness of the woman bathing. Not sure, but it is certainly eye-catching.

The Judgement of Paris

Another Renoir Work at the Phillips

Hanging close by Luncheon of the Boating Party is a much different piece by Renoir. The Judgement of Paris, based on the Greek myth that supposedly sparked the Trojan War, was done about 1908.

Renoir used black, red and white chalk on an off-white paper, giving the work a very striking look. But an odd one at the same time.

I'm still not sure whether I like it. But it certainly has stayed in my memory, which means that there's something of substance there.

Temporary Exhibition of Early Photographs at the Phillips

We started our tour on the top floor, where the Phillips Collection displayed a temporary exhibit focused on French artists from the late 1800s and early 1900s who used Kodak cameras to influence their work. Kodak's handheld camera was invented in 1888. Artists Pierre Bonnard, Maurice Denis, Edouard Vuillard, Felix Vallotton, George Hendrik Breitner, Henri Evenpoel and Henry Riviere all used the camera in different ways, but mainly to help with their painting. The photos themselves were never displayed during their lifetimes.

The collection contained more than 200 photos, with dozens of accompanying paintings, prints and drawings.

The most interesting part of the exhibit to me is the photos by Riviere, who actually didn't even use a Kodak. He carried a lightweight camera with glass plates up the Eiffel Tower in 1889 while it was being built to capture images of the steelworkers building the now world-famous French icon (see accompanying photo, which was part of the exhibit).

The dozen photos by Riviere that are part of the exhibition are on loan from the Fine Arts Museum of San Francisco.

Only 20 photos by Vallotton survive. He may have destroyed others after being criticized in 1916 for making a painting based on a photograph, the display says, which I find surprising because the paintings that are here really aren't very photo-like. His colors are too strong, too deep.

Unfortunately the exhibit is now closed.

In the Phillips Collection's Music Room

Heading into the building's Music Room you are almost overwhelmed by the dark wooden panels. The room is fairly large but feels smaller because of all the dark brown. This room was opened in 1924 with great fanfare as a public gallery.

The room was meant at one time to be a showcase of Augustus Vincent Tack's work, and there are 10 abstract pieces of art by him hung on the walls. They don't really fit in my view, and are much different than the artwork in the other rooms.

Carrying names like Ecstasy, Flight Liberation and Far Reaches (see accompanying illustration from the collection's web site), they are supposed to be unified by some sort of mysticism that may have been popular in the 1920s. To me, they appear as just blotched and scrawls of color. Far Reaches at least is recognizable.

My suggestion is to move quickly through the room.

The Rothko Room at the Phillips Collection

Abstract Art On All Four Walls

One of the more unusual displays at the Phillips Collection is the Rothko Room, which contains only four paintings by Mark Rothko. Rothko apparently didn't like being called an abstract expressionist, but that's certainly what most people would say he was.

I have to admit that it's not artwork that moves me in any way. Shown here is Ochre and Red on Red, painted in 1954. The other works are similarly named: Green and Tangerine on Red, Orange and Red on Red and Green and Maroon. And, well, they are pretty similar except for the colors, of course.

There were plenty of other rooms at the Phillips Collection, pread throughout the sprawling building (which originally was the founder's home, then was expanded). The things highlighted in this lens were the most memorable -- for better of worse -- but there's plenty more to see. It's best to plan on spending 2-3 hours to tour the entire place.

Books on the Phillips Collection's Masterpieces

Have You Toured the Phillips Collection?

The painting above is Van Gogh's Entrance to the Public Gardens in Arles from 1888. It's one of the many masterpieces that you can see at the Phillips Collection.

Have you visited the collection?

For More Information on the Phillips Collection... - ...Renoir and His Paintings!

Ford's Theatre, National Gallery of Art and the Library of Congress

More D.C. Travel Reviews By Us!

The Phillips Collection was the last stop of our vacation in Washington, D.C., and what a way to cap the trip! We packed a lot of history and culture into our days there, and you can too because everything is so close together. Here are reviews of the other places we visited during our trip. We hope it helps with your planning!

Thomas Edison's Laboratory
The Thomas Edison laboratory in New Jersey is a great family day trip. Edison was the inventor of the first practical electric bulb, the motion picture camer...

I hope you enjoyed this lens as much as we enjoyed visiting the Phillips Collection. Please share your thoughts on the collection, Renoir, this review or anything else that's relevant. All the photos of the paintings in this review are from the public domain. We took the photo in the introduction.