The Seattle Ducks - A Land and Sea Adventure

What is the Seattle Ride the Ducks Tour?

Since I live in the Seattle area, I have frequently seen the unique, colorful Ride the Ducks vehicles roaming the streets of the downtown area. With music blaring, people laughing and a wisecracking driver with a loudspeaker at the helm, it has always looked like a fun adventure. As often happens when you live someplace, I thought it was an activity I wanted to do, but never got around to doing until I was looking for activities to do with some guests from out of town.

I was so glad I finally got a chance to try this adventure. It was such a fun way to see the sights and learn about the city, even for a life-long resident like me.

As you will see from the photos and videos below, it was not a typical boring sightseeing tour. Although tour is hilarious and entertaining, safety is a serious priority, so all of the tour guides are US Coast Guard certified ship captains. We saw many of the most popular attractions in Seattle like the Space Needle, Pike Place Market, the Waterfront, Pioneer Square, the Fremont Troll and learned interesting facts about each. As the tour continued, the duck launched into Lake Union for a 30 minute trip around the lake. While cruising the lake, we saw the houseboat featured in the movie, Sleepless in Seattle, Gasworks Park and great views of the Seattle skyline from a different perspective.

On this page I'm sharing some photos and details from my adventure. Unless credited otherwise, all photos were taken by Vicki Green - PNW Travels.

Have you been on a Duck Tour? - Please answer our unscientific poll!

Ever Take a Tour on both Land and Sea?

Have you ever taken a sightseeing tour on an amphibious vehicle?

Climb Aboard Near the Seattle Center - Main Office and Starting Point

Ride the Ducks has two conveniently located boarding locations. The main office and boarding center is across the street from the Seattle Center near the Space Needle and the EMP/SciFi Museum. It is easy to find the colorful inflatable duck on top of the building. The other location is at Westlake Center in the main business district near 4th Avenue and Pine Street. Tours originating in both places include seeing the same places.

A Map of Seattle Showing Both Ducks Tour Boarding Locations 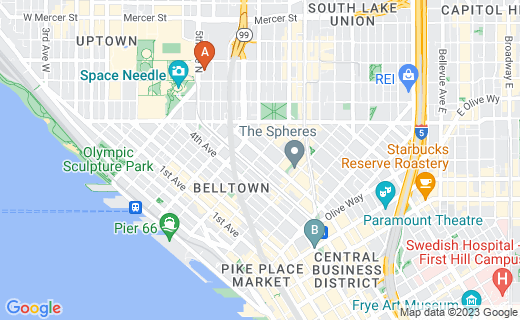 The second starting location is conveniently located at Westlake Center. The tour is the same from either the main office near the Seattle Center or Westlake. The two boarding locations are only a mile away from each other so you can pick the location that is most convenient. Your trip will start and end at the same location.

The other location to board the tour is at Westlake Center in the heart of the main business district. There is a small ticket booth that looks like the front of a mini-duck vehicle or to avoid waiting in line you can make reservations and purchase advance tickets for the Seattle Duck Tour.

The vehicles used were originally designed by Sparkman & Stephens and manufactured by General Motors (GMC) to be used as amphibious landing craft for troops and equipment during World War II as seen in the vintage photo below. They have been modified from the original design, including a roof to keep out the weather, to make them more comfortable for use as tour vehicles.

The Original DUKW from WWII - The Amphibious DUKW Landing Craft

Why are the Ducks called Ducks?

"D" indicated a vehicle designed in 1942

Meet Your Captain - Tour Guides on the Seattle Ducks Tour

Even before we started our adventure, we couldn't help but get into the spirit of having fun when we met our tour guide. They are all "captains" and have goofy names, but all are US Coast Guard certified to pilot on the water. Some examples of names of some of the guides include Captain Nick O'Time, Captain Dan Tennille, Captain Justin Credible and Captain Claire Boyant, They provide a lot of information about Seattle in an entertaining, fun way with jokes, music and an assortment of funny hats like this duck hat.

Starting the Tour from the Seattle Center Boarding Area

After embarking at the main boarding area near the Seattle Center, the tour begins by passing by the Seattle Center and Space Needle. It is a great way to get oriented to the city and see where various attractions are located to come back later to those you want to spend more time exploring.

The Olympic Sculpture Park - Art and Nature Together

Down the Hill to the Seattle Waterfront

On of the places we passed by and learned about on the tour is the Olympic Sculpture Park. Situated at the north end of the waterfront, this beautiful park combines sculptures from numerous world famous artists, beautiful grounds landscaped with Pacific Northwest native plants and a fabulous view of Puget Sound.

The Sights of Alaskan Way

We traveled along Alaskan Way while we learned about the history and attractions on the Seattle Waterfront including the Bell Street Cruise Terminal, the Victoria Clipper, Ye Olde Curiosity Shop, the Seattle Aquarium, the fireboats, Ivar's Restaurant and the Colman Dock ferry terminal.

Pioneer Square - The oldest area of the city

We wandered through the historic Pioneer Square area including the a totem pole and the beautiful antique pergola surrounded by the oldest buildings in the city. We learned about the Great Seattle Fire in 1889 and how the Klondike Gold Rush played an important part in the rebuilding of the city.

Driving Around the Streets of Seattle - The Adventure Continues

Navigating the Streets of Seattle

The adventure continues through the streets of Seattle and at every turn the driver provided more interesting facts and information about the city.

As our adventure continued we passed by the entrance to the famous Pike Place Market, another designated historic district. The Pike Place Market has been in continuous operation since 1908 and is one of my favorite places to go to buy fresh seafood and produce, watch street musicians or find a great gift made by a local crafter.

Beware of the Troll under the Aurora Bridge

Our tour included traveling through the fun and funky Fremont neighborhood, which includes many examples of unique public art displays. The one that I think if the most fun is the Fremont Troll who can be found under the Aurora Bridge. He is made from reinforced concrete and holds an actual Volkswagen beetle in his left hand.

A Duck Crossing the Fremont Bridge

A Splash into Lake Union

After seeing the sights by land, our captain drove the vehicle down a boat launch right into the waters of Lake Union for a 30 minute tour around the lake. We enjoyed watching the seaplanes take off and land in the lake, passed by Gas Works Park and saw the houseboat communities along the lake including the houseboat used in the film "Sleepless in Seattle".

A Cruise on Lake Union

Cruising Past the Houseboats on Lake Union

It was fun to see the houseboats moored along the shore of Lake Union, including the houseboat used in the film Sleepless in Seattle. The only way to really get a good look at the houseboats is from cruising the waters of the lake.

The Sleepless in Seattle Houseboat

Sleepless in Seattle (Special Edition)
The classic movie that everyone loves that was filmed in several locations in Seattle.
Buy Now

Almost everyone's favorite movie that was filmed in Seattle is "Sleepless in Seattle". The Seattle Duck Tour cruises right by the houseboat used in the movie.

More Fun on the Duck Tour

A Duck Tour Plunges into the Lake

The End of the Tour

After a fun-filled and informative 90 minutes, the trip is over. In this photo you can see the passengers departing a duck from the boarding location at Westlake Center. As the captain helps everyone disembark, I'm hoping I have more out-of-town guests soon so I'll have an excuse to go again!

The End of the Tour at the Westlake Center Boarding Location

Making a Reservation for a Ducks Tour

Buy Your Tickets for the Seattle Ducks Tour

Purchase Tickets to the Seattle Ducks Tour in Advance

If you would like to take a trip on the ducks, purchasing your tickets in advance helps you to plan your schedule and reserve the tour time you want. Skip time wasted waiting in line and the disappointment of not having tickets available at the time you want. Choose from starting the tour near the Seattle Center by the Space Needle or at the second location at Westlake Center.

See the Christmas Lights of Seattle from a Duck

The Seattle Duck Tour offers a shorter 40 minute Holiday Lights Tour during the evenings during the month of December. These trips are fun and festive, but do not include a splash into Lake Union. Holiday Light Tours depart from Westlake Center at 6:30pm.

Please sign my Seattle Duck Tour Guestbook - Let me know how you liked the tour!