The first 'mini-lesson' when I start a new set of 'Learn how to sew' classes revolves around scissors. I have had students show up with the $2.95 household scissors that are on special at Walmart... you know the ones with the thick yellow plastic handles the ones that might  work when snipping off the tip of the milk bag but do very little when trying to cut any type of fabric and are totally useless when wanting to snip off a single thread.

I don't want to sound toffee-nosed or haughty here but in my honest opinion a really good pair of scissors is one of the best investments anyone can make when starting out in any type of handy-work, no matter if it's quilting, embroidery or trying to build a latest styles wardrobe for 3 year old little Stephy.

At lest one good pair of scissors or shears really belongs on the list of most important things to have.

Truth be told one pair of scissors in most cases is not enough to perform all the different sewing tasks such as tailoring, trimming appliques, snipping machine embroidery threads or cutting buttonholes etc. let alone cut all the different types and thicknesses of fibers and specialty fabrics available in our wonderful fabric-world of today.

Over my thirty-five+ years as a tailor, dressmaker, embroiderer and quilter I have used many different scissors. It seems I've tried most, ones in the price ranges that ran from just under $20.00 to more than $200.00. Obviously the type of scissors or shears best suited are really influenced by the type of sewing you do or specialize in.

Let me explain. If you work with fine sheer, silk and organza the scissors you need are the kind that work best with the these fine soft fabrics. If you mainly reupholster furniture then the scissors have to be tough enough to handle multiple layers of dense and hard fabric. On that note a sewer who does a little of each will have to find a middle ground as having a pair for every application might just not be feasible.

There are many, many styles, types and manufacturers of scissors and shears on the market.

If you live in a large city, chances are that in one of the malls, there is a store that strictly handles sharpies... items like scissors, shears, trimmers and knives etc.

There you can ask the sales clerk to show you all the different styles, as they will carry all major name brands (good name brands that is). This will give you a chance to get a feel for the scissors or shears, better said, it lets you find out what type of handles, size etc. fit your hand best. Obviously this is the ultimate way of scissor shopping but like I said these types of stores are mainly in large city centers only. Also be prepared that none of the price tags there will be in the 20 dollar line as they only carry the best know name brands.

A good fabric store will also carry a selection, definitely not as wide as the specialty stores but unless you're a professional sewer who needs specific cutting tools then you're sure to find something that will suit you there.

If you know what kind of scissors you really like on-line can also be a good way to find great buys on scissors. 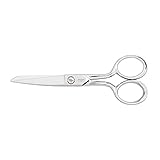 Before we get into the particulars of "what to look for in a scissor" Let's cover some of the basics first. Obviously all cutting tools that have two crossing blades held together at a pivoting point are called scissors. However there is a difference in structure between scissors and shears.

Shears have one large finger ring or hole and a smaller one for the thumb and are usually longer than 7in/17.5cm in length. Most of these are offset or bent for cutting on a flat surface. This bent structure allows room for the hand to move up and down while the fabric can remain flat on the table without it being lifted as it's being cut. Most importantly this allows for a better cutting accuracy.

Scissors/shears should open and close with a smooth and easy action. (should feel like when you're cutting soft butter) The two blades as they're closing need to fit together without more than a fraction of a hair space between them and when the blades are closed the tips or points should meet exactly.

What to look for when buying a pair of sewing scissors!

These are some of the things I look for when I'm shopping for new scissors/shears: (naturally these points all depend on what those scissors will be used for)

~How well do the scissors fit into the hand? After all, these scissors/shears are an extension of the working hand. The scissors need to sit comfortably in the hand. If they don't fit right the hand will tire after a few short minutes of cutting.

~Are they too heavy-- if you pick them up and the first thing that comes to your mind is 'wow, they're really heavy' then just imagine working with them for a full day. (not a good option)

~Are they too long-- Naturally a longer cut with one motion is preferable, mainly for accuracy cutting but if you don't feel you have control over them or you feel you're going to stab someone across the room with your shears then the 15"/37.5cm long scissors will not do you any good. After all you're not just cutting on the straight, there are curves and tight corner to consider too.You need total control over the cutting edge and what you're cutting, so if you have that with your 8"/20cm trimmers then you're getting the job done faster and better than if you're scarred of your scissors and you keep hesitating.

~ I have short stubby fingers, now with arthritic knob knuckles, so the handle rings need to be large enough so that my fingers or thumb don't get stuck. The scissors/shears need to slide off and out of my hand easily. Nothing is more frustrating than when you have to waste time to puzzle twist and turn your thumb out of the scissors ring.(This has happened to me on many occasions when I grab the wrong scissors)

~I prefer really pointy fine tipped scissors to the solid blunt and thick styles, especially when cutting fine fabrics such as sheers, organza, chiffon etc. These finer structured scissors/shears do not have the long life as the more solid built ones as they can only get sharpened so many time but I consider that well worth it considering of the better control I have.

I have accumulated many scissors over the years, some I can do almost anything with, others were not my favorite so they're almost in brand new condition. Some felt perfect in every which way except that they just didn't have a thin and fine enough tip but once those were machined down they became instant best loved ones.(only ask trusted sharpening companies to do this as once messed up scissors will only be good for paper cutting jobs after)

I have micro-serrated shears that are perfect and give more control when cutting silk-like fabrics. Their fine serrated edge grasp silks and fine knits for a smoother accurate cut.

I have a pair of pelican-beak pointed ones that slip between the seam allowance and the item being sewn and prevents the cutting of the bottom layer... perfect to use when prepping for those french seams.

A friend gave me her vintage pair of shears, that have been around for over 60 years, they're WISS name brand 15"/37.5cm long upholstery fabric shears that can cut jute-backed carpet. They could probably cut through nails. I have only had to have these ones sharpened 3 times in the 30+ years that I have owned them.

The KAI 7000 shears offer all I ever look for in a pair... the weight, the thin blades, the fine point and they're absolutely the best I can afford to use on a constant basis. They do come with a bit of a higher then average price tag (around Can$130.00) but they're really worth it, to the very last little dime.

These stainless steel Japanese made shears feel lightweight but are made for heavy duty cutting. They have larger finger rings or handles with soft cushion-y inserts that fit my thumb and 4 fingers nice and loosely. I can cut with them for hours without my arthritic hands getting too tired and sore. They're also held together by a double-locking nut.

*****One word of caution though--- make sure you take them to a reputable sharpening company when they need to be sharpened (Mine are 4 years old now and still as sharp as the first day when I bought them) because I was told that the cutting edge of the blades of Japanese made shears  are machined at a different degree than the rest of the world name brands. *****

How to care for your sewing scissors/shears:

I can not remember how many scissors and snips I've ruined over the years when the project I was working on pushed them off the sewing machine table. This is when I came up with 'leashing' them to my sewing machine with a piece of elastic long enough not to restrict my using them which ever way I'm facing but short enough that if they go over the edge even bouncing will not reach the floor. Every work station in my sewing room has one of these imprisoned pair of scissors/shears snips or trimmers tied to it. Which ever works best for whatever work task.

Check out these babies! I'm looking for these!

Great Sewing hubs by other hubbers who share a whole lot of awesome info!