Selecting Jobs and Careers in Hillsboro, Oregon, the Silicon Forest

Hillsboro is nicknamed the odd-sounding "Silicon Forest." Since forests are not made of silicon and computer components are so made, this must be a reference to computers and related Information Technology. In fact, the successful Intel Corporation is headquartered in Hillsboro, which is near the larger Portland.

For geographical reference, we have Tillamook on the above map, near the Pacific Ocean. Another small town known for its creameries and cheese production, Tillamook is about 60 miles or an hour's drive form Hillsboro.

Tillamook is named after one of the nations of Indigenous Peoples of the Pacific Northwest, related to the Salishan language groups (see Native American links below). The town has several museums, WWII history, and makes a good adjunct attraction to Hillsboro. 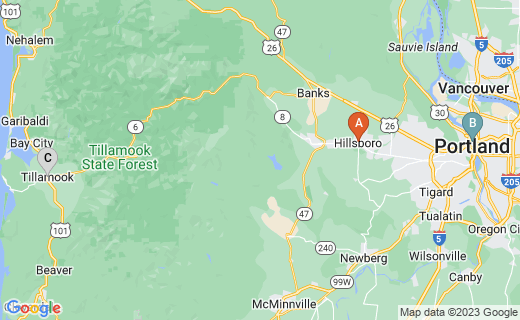 B
Portland OR:
Portland, OR, USA

Vancouver, Washington is just to the north.

Shugte Park is one of over 20 city parks in Hillsboro and it contains a recreation center and Iindoor pool along with a park. In the park is at least one Native American sculpture by the famous artist Peter Wolf Toth (see photo to the right).

This particular head carving is one of a set that Mr. Toth completed in all US states around the nation to represent the numerous nations of Indigenous Peoples here. His ongoing work has spread to Canada in a project he calls Trail of the Whispering Giants. He is Hungarian in origin, but immigrated to America to Akron, Ohio, solme 175 miles north of my home city. Look in your home state or province for his work.

In Akron, you can see the sculpture Rotaynah, representing all of the "tribes" of Ohio. In each state, Mr. Toth has attempted to sculpt a composite of the local peoples in stone or wood. The image was completed in 1985 from a red oak and stands before Akron’s Fairlawn Elementary School, which is now a Judith Resnick Leaning Center (named for the Challenger astronaut).

Shute Park also houses a ;public library, a senior community center, and many sports courts - including something called "pickleball."

Additional High Demand Jobs in and Near Hillsboro

Hillsboro economy is supported by many businesses, but a large contribution is made by the IT Industry, including component manufacturing. Hundreds of high-tech and Information Technology companies are profitable in the Hillsboro area and can be found listed on the Chamber of Commerce Website under Hillsboro Magazine.

Among leading companies in this section of Oregon are Epson, Intel, and Yahoo!, among many others. Triquint Semiconductor is a leader that was particularly highlighted by the Chamber of Commerce in Hillsboro Magazine for 2010.

Mass transportation and public roadways are well maintained In order for Hillsboro to continue to grow in the 21st Century. Bus service, light rail (all the way to Portland), and public and private airports are available. The transportation services will continue to help numbers of new jobs grow, many of them in computers, related manufacturing, and Information Technology overall.