North Texas Workforce Region and commercial market is made up of 11 counties on the northern border. The Greater Wichita Falls Area is the metro hub of this region and covers three counties itself.

Considering a greater land mass of the northern portions of Texas, seven Texas cities ranked throughout the list of the Top 25 Best Places to Move in America by Forbes.com. These are not far from Wichita Falls and speak to the growing economies northern parts of the state.

Compared to the rest of the United States,the cost of living in Wichita Falls is almost 25% cheaper than in the rest of America, with about 104,000 residents. Residents posting on Internet bulletin boards say that Wichita Falls shows a lot of potential for the near future, especially west of I-44. Areas east of I-44 are subjects for revitalization plans in the further future. Mid-Careerists and workers with families find the Greater Wichita Falls Area a good place to raise families and pursue career advancement. 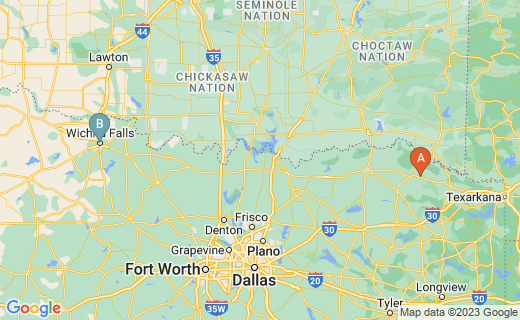 Native Americans lives in North Texas for quite a while and several nations passed through this area on their way eastward and back to the west as they were pushed back by white settlements, particularly around the Civil War. The Comanche, Kiowa, Cheyenne, and Apache nations were sojouners back and forth.

Wichita Nation is the longest situated nation in the North Texas and Texoma areas. They likey came through the Red River from Oklahoma and Kansas thousands of years ago. The French developed good relations with the Wichita in the 1700's and the Wichita helped the French trade with Comanche Nation.

Wichita likely comes from a Choctaw word that means "big arbor", which is a grass-thatched arbor in native villages of northern Texas and into Oklahoma. Wichita Nation called itself simple First People. They stayed put and did not roam the plains, living interment villages in their tall cone-shaped straw huts. Arbors joined the huts and served as roofing for group work and meal preparation.

In the late 1860s - 1870s, cattle ranchers appeared in the Wichita Falls area and Native Americans were eventually removed to reservation lands in Oklahoma. By 1882, the Texas railroads had come through and farmers appeared on the scene as well.

In 1907, the city was the hub for North Texas and South Oklahoma in cotton, followed by food and livestock-feed crops. Oil was found a few years later.

Sheppard Air Force Base was built during WWII and boosted the local economy even further.

The major industries in the 21st Century are

Comparisons of Job Projections and Listings

The job titles in both columns listed directly below and in bold type indicate occupations that are forecasted by the federal and state government to produce the greatest increase in openings by 1) percentage increase and 2) actual numbers of jobs. In the case of the greater Wichita Falls Area and North Texas, seven out of the 15, or about half of the listings appear in both columns.

Job Titles Adding Most Jobs to 2016

Bold entries represent those also forecasted to increase most.

The Top 10 Leading Job Listings in this metro area are included in any of three industries: 1) Healthcare, 2) Sales, 3) IT and 4) Food Service/Dining.