Mount Rainier: When Will This Active Volcano Erupt Again? 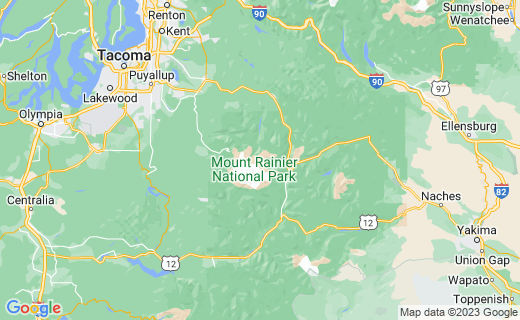 Mount Rainier, in the Cascade Mountain Range, is part of the Ring of Fire of volcanic ranges that almost circle the Pacific. It includes the Aleutians, the western coast of North and South America, Antarctica, eastern Indonesia, the Philippines and Japan. The most recent eruptions in this ring were Mount St. Helens in 1980 and Mount Pinatubo in the Philippines in 1991.

Highest Volcanic Peak in the Cascades

Mount Rainier is the highest volcanic peak in the Cascades. It started forming about 500,000 years ago through intermittent lava flows and explosive eruptions of ash and rock. It grew to an estimated 16,000 feet. About 5,700 years ago it erupted and the mountainside collapsed. Tons of rock, mud and debris streamed down the mountain’s northeast side. A 100 foot high wall of mud raced along like a river across 125 square miles ending in the Puget Sound. This mudslide was named the Osceola Mudflow. The towns of Kent, Sumner, Auburn and Puyallup are built on top of this flow. Mount Rainier was no longer 16,000 foot tall. Small eruptions have occurred every few hundred years in the past 10,000 years. The most recent large eruption was about 1,000 years ago. The last small eruption was 150 years ago. Many volcanologists thought Mount Rainier would have a major eruption before Mount St. Helens.

Mount Rainier now has a 14,410 foot summit. It towers 7,000 to 9,000 feet above all of its neighbors. It sports 26 major glaciers, the largest single peak glacial system in the contiguous United States. Some of its climbs are so treacherous, rarely does anyone attempt them. Even the so called easy routes are so challenging they are used as training grounds to prepare for the world’s highest peaks. The glaciers form when there is more snowfall than snowmelt. True glaciers consist of three layers: snow, mixed snow and ice, and pure ice. They are called rivers of ice because they move down the mountain. The steeper the slope, the faster it travels downward. Mount Rainier’s glaciers move from a few inches up to two feet per day.

Mount Rainier’s peak is usually above the clouds. There were a few clouds below the peak when I first saw the mountain. You are lucky if you see Mount Rainier on a sunny day because most of the time it is cloudy. I was lucky the day I went to Paradise as it was sunny and clear of cloud cover. Even in the summer when the lowlands are sunny, the mountain slopes are frequently covered in fog, mist, rain or even snow showers. Weather systems full of moisture come off the Pacific Ocean and pound the sides of Mount Rainier, dropping record-breaking amounts of snow at the higher elevations. Paradise Valley at a mile above sea level averages 680 inches (56.7 feet) of snow. In the winter of 1971-1972 a record 1,122 inches (93.5 feet) of snow fell!

In 1792 British Explorer Captain George Vancouver named the mountain after his friend Admiral Peter Rainier. In 1870 General Hazard Stevens and Philemon Van Trump made the first documented climb. James Longmire discovered some mineral springs in 1883 and later in 1890, he and his wife built and managed the first hotel at the site. Mount Rainier was established as the nation’s fifth national park in 1899. Automobiles were first permitted on the road from Longmire to Paradise in 1915.

Paradise is famous for its views and its wildflower meadows. Every year, usually in July, as the snow is melting in this subalpine meadow (5,000 – 8,000 feet high), the white avalanche lilies, yellow glacier lilies and white western anemones begin to appear. As the summer progresses, an abundance of flowers appear. The list includes deep blue lupines, wild asters, daisies, orchids, cinquefoil, purple gentians, white and pink heather, marsh marigolds, Indian paint brush, purple shooting stars, pasqueflowers and beargrass. Beargrass is an interesting flower. It is a misnomer as it is not a grass nor do bears like them! Being an avid lover of wildflowers, I was looking forward to seeing the meadow in full bloom. But it was not to be. In 2008 in mid-July the meadow was still buried under snow.

Mount Rainier is the gem of the Cascades. How can such beauty be hiding such turmoil? Volcanologists will be given plenty of warning before an eruption, but not the exact time. Mudslides are more of a concern as they come crashing down with no warning. I was pondering these possibilities as I stood gazing at its beauty, hoping I was safely back home in the Midwest before she threw any tantrums.