The Ancient City of Cyrene

Cyrene was a very important city, founded by Greeks and later dominated by Romans, that became the main Greek city in northern Africa (part of today’s eastern coast of Libya, a region known historically as Cyrenaica). It was the cradle of a philosophical school of Hedonism founded by Aristippus of Cyrene, a student of Socrates. Cyrene had its heyday in the fifth century BC, with its main export product throughout much of its history being the valuable resin (called laser, laserpicium, or lasarpicium) extracted from a plant known as silphium, which was also called silphion, laserwort, or laser. Silphium was a rare herb that only grew in a narrow coastal area, of about 11,000 km2, near the city and was said to be used in cooking (e.g. as spice) and to have medicinal properties. The plant gained much fame, being cited as a true panacea by Pliny the Elder (23-79 AD) and by the poet Catullus in his elegies to his beloved Lesbia. Silphium was so important to Cyrene and its region economically that it may have been harvested to extinction eventually; possibly in the first century AD. This along with an unfortunate series of natural disasters is thought to have contributed to Cyrene's decay greatly. 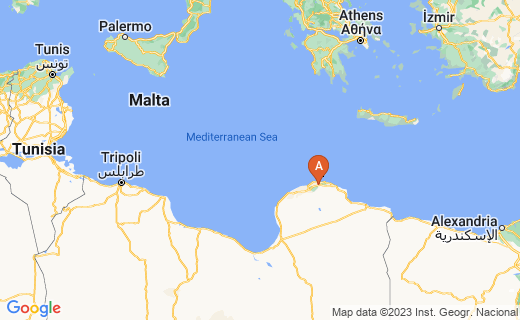 The plant was so economically important that in many of the silver coins minted in the region, in the sixth to fifth centuries BC, there were ithyphallic and testicular imagery evoked via stylized representations of the silphium plant and seed pod. In some, it is possible to identify what would be an entire branch of the plant, on what is believed to be the only visual description of the plant. Other coins of the same region have drawings of philosophers and scholars of the city, e.g. Aristippus of Cyrene, Eratosthenes of Cyrene, and in others there are drawings resembling a heart. According to Pliny the Elder and Garcia de Orta’s Colóquios dos simples e drogas da India, silphium possessed abortive and menstruation-inducing properties among others, e.g. treating cough, sore throat, fever, indigestion, aches and pains, warts, mental illness and all kinds of maladies. It was also used as a contraceptive, which was possibly the main reason of its high price and value. Women would then prepare an extract of the plant’s pods, i.e. a dry dehiscent fruit that is composed of one or more carpels, and used this extract to wet a piece of cotton, which was then introduced into the vagina before sexual intercourse. The ultimate effect was preventing pregnancy.

Silphium was an important species in prehistory, as evidenced by the fact that Egyptians and Knossos Minoans had specific glyphs believed to represent the silphium plant. There are records and evidences showing its wide use among ancient Mediterranean cultures. It was so highly praised that the Romans considered it “worth its weight in denarii” (silver coins). The Greeks considered silphium as a gift from the god Apollo. All that is left of silphium and its resin today is their various reports in literature. However, from the few descriptions, mostly vague and imprecise, it is hard to identity silphium exactly. From its long list of medicinal properties, together with its morphological descriptions and numismatic engravings, it is commonly believed silphium to be a now-extinct plant of the genus Ferula, belonging to the carrot family Apiaceae, perhaps a variety of “giant fennel”. Theophrastus wrote in his Historia Plantarum (Enquiry into Plants), although acknowledging the inconsistencies of its sources and information given, that the type of Ferula, specifically referred to as silphium was odd in that it could not be cultivated. The still-extant plant Ferula tingitana, known as the giant Tangier fennel and considered to have abortive and menstruation-inducing properties, has also been suggested as a possibility. Another plant, asafoetida, Ferula assa-foetida L., was commonly used as a cheaper substitute for silphium, as it had similar sufficient qualities that Romans used the same word to describe both. From the descriptions by Pliny the Elder, a little more elaborate and detailed than others, one can extract more information, allowing some botanists to ensure that some varieties or relatives of silphium may still exist today, especially in the Pyrenees, all belonging to Apiaceae. Unfortunately, these varieties or close species do not have all the benefits and properties that are credited to Cyrene's original laserpicium. The many similarities between Margotia gummifera, another member of the carrot family Apiacceae, and silphium of classical texts have lead some authors to consider Margotia gummifera as the current species closest to silphium. However, the current range of Margotia gummifera is much larger than that mentioned in ancient texts, as it can be found in the south of Portugal and Spain and northern coast of Morocco, Algeria and Tunisia. At the very least, Margotia gummifera could correspond to the Carthaginian silphium quoted by the Athenian poet Eubulus, 4th century BC, as a substitute for the Cyrenean silphium which has since disappeared.

The reasons or causes of silphium’s extinction are as questionable as its true identity. Most likely it was not due a single factor rather a combination of several that might have acted differently through time. According to Pliny, it was also believed that animals that grazed on the plant benefitted, which was seen through some supposed effect on the quality of their meat. Therefore, overgrazing combined with overharvesting, due to high demand, may have led to silphium’s extinction. This seems plausible especially if one considers a plant that was hardly cultivated, but simply harvested from wild populations. On the other hand, the climate of the Maghreb has been drying over the millennia, therefore desertification may have also been a factor to consider. Another theory is that when Romans took over power from Greek colonists, they over-farmed silphium and rendered the soil unable to yield the type that was said to be of such high medicinal value. Pliny wrote that the last known stalk of silphium found in Cyrenaica was given to the Emperor Nero, second half of the first century AD, as a “curiosity”.

Looking at botanical drawings and descriptions of the modern species believed to be relatives of or candidates to silphium, one observes that the pod of these species resembles the traditional shape of a heart, ©. Many species in the family Apiaceae, such as hogweed, Heracleum sphondylium, have heart-shaped indehiscent mericarps (a type of fruit). This suggests that what is engraved in the ancient coins of the Cyrene region is not a heart, but simply the pod of silphium, which was so important in the life of the city functioning as a contraceptive. Some scholars thus believe that the popular heart shape that today represents love around the world comes, in fact, from the shape of the pod of silphium. It is possible that the association with the heart was indirect. Indeed, it was an association primarily with sex without compromise, since that pod was used in preparing a contraceptive. Then, this association must have been later extrapolated to sentimental and religious love and therefore to the heart. As a reminder of its past importance, silphium is also used in the Italian military heraldry, as Il silfio d’oro reciso di Cirenaica was the symbol granted to the units that fought in the campaigns in North Africa during World War II.

More to Know at: