Civil Air Patrol Aerospace Education Group and Why I Joined

Men and Woman in CAP During WWII

Civilians in the Air During World War II

Formed about a week before the Japans Forces' Pearl Harbor attack in 1941 brought the USA into WWII, the Civil Air Patrol is a volunteer group that helps in Search & Rescue, Aerospace Education, and defense in tough and extreme times. Members used their own aircraft to help the USA in the Second World War to prevent penetration of our Atlantic Coast by German ships.

These elder CAP members are still considered heroes and, like many WWII vets, are receiving recognition over 70 years later. In 2013, a special Congressional Medal of Honor was designed for CAP members of WWII.

Formation of CAP, the USAF Auxiliary

CAP formed exactly on December 1, 1941. Some history enthusiasts, especially some who feel certain that the Presidential Administration knew beforehand that the attack was imminent, feel that the auxiliary unit was formed as an extra gear-up for war. Th CAP veterans report no such intel or motivation.

The civilian volunteers in CAP flew missions to guard the American coastline along the Atlantic Ocean and the Gulf of Mexico, helping thwart German submarines that were sinking American supply ships in route to the Allies. The volunteers flew their own airplanes and bought their on fuel.

According to CAP records, CAP pilots flew 86,685 missions during 244,600 hours of service across 24 million miles. 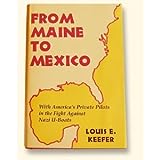 From Maine to Mexico: With America's Private Pilots in the Fight Against Nazi U-Boats
Buy Now

Congressional Medal of Honor and CAP in the 21st Century

The US Senate approved the medal for our WWII CAP members in 2013, but the House of Representatives gave their official approval a year later in May 2014.

During WWII 120,000 members of CAP stepped up to support the American military effort and help keep the nation secure. All surviving members or their surviving families are awarded the medals.

CAP nationwide continues to do important search and rescue missions through its members in two categories: A) ages 12-18 and B) ages 18 and older with no upper age limit.

In addition, an Aerospace Education groups includes formal and informal teachers and tutors that can access modern teaching materials and run worships at local and national meetings and encampments like a 5-day Aerospace School at Wright Patterson Air Force Base in Dayton-Fairborn, Ohio on the National Aviation Heritage Trail in the Ohio Space Corridor (Cincinnati - Dayton-Columbus quadrant).

The CAP Aerospace Education group is easy to join at a very small yearly cost that includes large amounts of current books and materials. I found membership processed quickly and materials received in just a few days. Not only that, but it also allows me to build rockets!

October Sky
This is the story of author Homer Hickam and his friends before he became a NASA engineer during the von Braun era.
Buy Now

Those that join the Civil Air Patrol quasi-military volunteer groups are under no obligation to join the US Air Force or any other branch of the services and they are not military members. Membership is a renewable yearly commitment to show up at some meetings and help out as one can.

Members learn aviation and aerospace history, attend field trips, help at air shows (free admission), learn life saving and emergency survival skills, and participate in real search and rescue missions. A volunteer in Michigan recently received a long ride on a B-17 just like the one her dad manned, at no charge - she saved over $3,000, which she did not have, and cried to honor her dad this way more than 70 years later.

Some members join the USAF after high school or college graduation, but that is not required. The skills acquired are useful in daily life, in emergencies, and on a resume. In addition, volunteers can be pleased that they are training some of our future aviators and astronauts.

Although I have not flown an airplane or participated in full astronaut training, through CAP I can help prepare students for a future in which they can do both things. Training in preventive medicine that included aerospace problems partially prepare for CAP volunteering long before I considered it.

Premonitions about the Challenger and Columbia Shuttle Disasters kept me from astronaut training, with good reason. Today, the addition of the NASA Commercial Crew and various commercial space enterprises has increased the safety and reach of the US space programs.

Jobs and business are increasing in these industries and I may sometime travel by space shuttle in the next decade beside students I have helped train.

Arospace Education: Space Telescopes for Everyone

In Space - Third Star to the Left and On Toward Morning

In the Air and Space