Looking for more information about the music album entitled Saiyuki Reload Ending Theme Song ID Single by flow-war from the Saiyuki anime and manga series by Kazuya Minekura? You've come to the right place. This article includes all sorts of useful and relevant information about the music album in question including its track list and song samples. 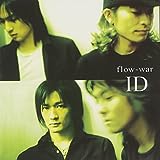 ID
Not a very descriptive Amazon title, huh? It doesn't even list flow-war as the artist. People looking for this album might have a bit of a hard time with such a title. The cover features the members of flow-war. You can find out more about this music album below.
Buy Now

More information about the Saiyuki series:

If you want some more information on all the anime in the Saiyuki series, the aforementioned article has many more details.

It can be very difficult to find any information about this seemingly elusive music album by flow-war.

Many reasons could be attributed to this, foremost of which could be because it isn't really a well-known album at all. In fact, it's possible that the only reason people know about the existence of this album is because of the main track in this single. This main track is the song "ID" by flow-war, which is also the name for this music album.

The name of this album can also be another reason why it's so hard to find anything about it. Note that the album name is "ID". This word is pretty common, so much so that you're bound to get many other results when trying to search for this album.

Even the name of the artist can add to the difficulty of searching for this music album. If you break down the name "flow-war", you get the English words "flow" and "war", both of which can be connected to many different things that have nothing to do with the artist flow-war.

It's also not a hard stretch to think that the ID Single by flow-war music album could have been incorrectly labeled or named since it is a Japanese album by a Japanese artist from a Japanese anime series so those who may not be well-versed in the Japanese language or who may not know anything about all this could have made a mistake.

Without things like relief / we wait for the convicting verdict / The system collapses, the time is now

Saiyuki Reload - Volume 1
The cover of this DVD features Genjo Sanzo, one of the main characters of the Saiyuki series. He is a monk who smokes and drinks. His main weapon is a Smith & Wesson gun and the Maten Kyomon (Evil Sutra). Saiyuki Reload is actually the sequel to the Gensomaden Saiyuki anime. The first ending theme song of this anime is ID by flow-war.
Buy Now

From researching around, it appears that there are actually two music albums with the name ID Single by flow-war.

The only difference between these 2 albums are their respective album covers as well as the track list for these albums. But both covers have the text "flow-war" and "ID" on them. The covers also include pictures of the 4 members of flow-war.

And, of course, since both albums have the title "ID", it's only to be expected that the song "ID" appears on both albums.

Here are the track lists for the 2 music albums. Note that all the songs in both albums were sung by flow-war. The first music album only contains 4 tracks. But there are only 3 songs. The last track is an instrumental version of one of the songs.

MITSUMETEITAI
The song "Mitsumeteitai" by flow-war, which is also this music album's title, is actually the first ending theme song of the anime Saiyuki Reload Gunlock. This is the sequel to the Saiyuki Reload anime by Kazuya Minekura.
Buy Now

The Japanese characters from song number 2 is from Amazon Japan while the romaji words is from cdjapan.co.jp. Song number 2 is also known as "Yakou Mushi" by other sites like planetlyrics.co so it has been added to the track list.

The other songs don't have Japanese characters to them because they are English titles. For this reason, this track list was obtained from both Amazon Japan and cdjapan.co.jp. The second music album contains 11 tracks.

This track list was obtained from Amazon Japan. The English words have no Japanese characters to them because they are English titles.

While the product description page of this music album from Amazon Japan is in Japanese, there are some more English words there like Reload and Reload Gunlock.

It can then be inferred that the Japanese characters prefacing these words must be Saiyuki.

With that said, it appears that song number 5 from this album is actually Mitsumeteitai, which is the first ending theme song of the anime Saiyuki Reload Gunlock (this is the sequel to Saiyuki Reload).

The full title of that album is Saiyuki Reload Gunlock Ending Theme Song Mitsumeteitai Single by flow-war. If you see the Japanese characters of Mitsumeteitai from that album, you'll see that they're the same here as well. Unfortunately, no translation for this track list could be found anywhere. Running Google Translate on the Amazon Japan page does help a bit although not much. For instance, it translates song number one to 'one path, brambles' and song number 3 to 'there's no place to run away'.

There's a pretty somber and serious tone to this song. The voice of flow-war fits the song perfectly. "ID" sounds soft and sad in some parts, but it's a really nice song though not one you'd deem as lively or cheerful.

A lot of words are sung in English such as the title itself, 'days', 'adrenaline', 'confuse', 'identity', and 'relation'.

The translated lyrics does have good meaning to it with words and phrases like 'no relation to the lying us, we wait for the convicting verdict' and 'without things like relief, the dance of a flock of butterflies'.

It does seem like the song is speaking of each of the Sanzo-ikkou individually.

The 4 of them are vastly dissimilar from each other with their varying personalities and characteristics that make them who they are.

They each have their own identities as well as their own imperfections (their weaknesses and shortcomings) that make them human. This really allows the Saiyuki fans to be able to relate to them. The Sanzo-ikkou have reasons for their actions and for why they act the way they do now. Their respective pasts, no matter how dreadful and awful, have shaped their present.

Questioning the regime at our leisure is an act

"Yakou Mushi" is merely one of the tracks in the ID Single by flow-war. This song sounds somber and serious with a soft and light tone to it. The music really compliments the lyrics of the song.

The translated lyrics to this song could not be located. Even the Japanese lyrics seem elusive. However, from listening to the song, there are some English words like 'we just want to dream', which seems to indicate that this song is about dreams.

Part of the difficulty of finding anything about this song may have something to do with the song's title. Notice that the song's romaji title could either be "Yakochu" or "Yakou Mushi" and sites use either of these titles. If you look at the video of this song from YouTube (which you can see below), you'll also notice that the aforementioned video actually uses the song's Japanese title. In short, if you're only using one of the song's titles to look for it, then you might not find all the other information on it because some sites will list the song by its other titles.

Saiyuki Reload Volume 3
This is volume 3 of the Saiyuki Reload manga. The main characters, the Sanzo-ikkou, are featured on the front cover. They look absolutely handsome and gorgeous as usual, huh?
Buy Now

Just like the song "Yakou Mushi" featured above, this song does not appear anywhere in the Saiyuki series. It is merely another track in this music album by flow-war.

Like the other songs of flow-war though, this is a good song. There's a rather sad tone to this song. It sounds grim and somber.

Even the instrumental music of this song seems to reflect this sadness and sorrow, which is echoed by the light, soft voice of flow-war. Listening to this song, you will hear that the word "everyday" is sung in English.

As with many of other songs by flow-war, not much information could be located regarding this song. No videos or even lyrics could be found even upon much extensive searching around. The English title "Everyday" may be one of the reasons why it's so hard to find anything about this song. The word "everyday" could be associated with a variety of many different things and it can even be separated into two more words, "every" and "day".

The other songs by flow-war

The many other tracks from flow-war's ID Single music album are also not part of any of the music in the Saiyuki series.

They only appear in this music album sung by flow-war.

However, attempts to search for any more information about these songs have been met with no success at all. No sample videos or song lyrics could be located anywhere.

Even the songs with the English titles don't make it any easier to find anything about them and this is due to such titles as "Circle" and "Crush". These kinds of titles are all common English words, which can pertain to a lot of other things.

What do you think of Saiyuki Reload Ending Theme Song ID Single by flow-war?

Saiyuki Reload Ending Theme Song ID Single by flow-war is a wonderful music album to have especially if you're a Saiyuki fan and / or a fan of flow-war. The voice of flow-war is really good and fits the tones of the songs.

You can easily see this by listening to "ID" and "Mitsumeteitai", two of flow-war's more famous songs since these two appear in the Saiyuki series. If you like these songs by flow-war, then chances are that you'll like the rest of flow-war's other songs.

Check these out if you're looking for more information on the other music albums in the Saiyuki series: