Gee! I thought I was going crazy for a minute there. I created this a couple weeks ago, and it didn't work. Now it is back to scare the crap out of me! I thought someone hacked me!

Anyways. I will be proud to bring you my new review of Adam Lambert's Debut CD!

If you are not familiar with Adam Lambert by now, he was the 2009 runner up on American Idol. As far as I am concerned he should have won. But, like past contestants: Clay Aiken, and Chris Daughtry, Adam Lambert is going to be the next mega star to come out of American Idol. And, his debut album. "For Your Entertainment." Is going to get him there quick.

What is there to say about this album, other than it is probably the best to come out of the American Idol series since Daughtry. Unlike some artists this CD has so much variation, and freshness, that, you wonder why Adam Lambert was not recording years ago. One thing I can't stand is an album where every song sounds like the next, you will certainly not find that here.

Like the first album I reviewed "Lady Ga Ga" "The Fame Monster." I am going to give you a review of each song from my personal favorite down to the next. And, I was not too surprised to discover that Lady Ga Ga wrote my favorite song. (Not to mention that she probably gave him ideas for his newsworthy shocker performance on the American music awards.)

On to the reviews!

1. Fever. I love this song! I must have listened to it 8 times in a row back to back. It has an awesome beat. And, even though the lyrics might confuse the GP. It's still a fun song!

2. Whatdaya Want From Me: This is also a very good song, it has meaning, and soul. Something that a lot of songs don't have. I'm sure this one is going to be a big hit.

3. Soaked: This is a very Freddy Mercury, Queen type Ballad. Beautiful, and, really shows off Adam's voice. To say that he can't sing, (as some people have.) Is just plain crazy.

4. Surefire Winners: This song is funky, and, seems very techno and modern. It also has a pretty good beat. like a lot of songs on this album do. A mass hands in the air concert song.

5. last Dance: OMG! this song is so different! The music combined with Adam's voice. I would swear if you were high during this song, you might feel like you were floating on air. I don't know how else to describe it. I just never heard anything like it.

6. If I had you. This song is the only song on the album that seems average pop. Kind of like a cross between wham, George Michael, Petshop Boys, and Rick Astley, only a lot better.

7. Aftermath. I'm not sure, But, I would swear that this entire song is sung by Daughtry. It just sounds so much like a Daughtry tune. but, taken to the next level with even better vocals.

8. Ain't given up: Yet another Ballad, but this one is more of a rock ballad. kind of Bon Jovi-ish at points. But, it is really good. Once again his voice is what makes the song work.

9. Pieces: Like Soaked, the music in this one is slow and different. Kind of like it was sang in zero gravity, with scenes of meteors flying over head...floating through space. Ok.

10. All my life: This is very strange, like a cross between Billy Joel's music and Green Day. Lots of big words, and, a kind of something for everyone tune. But, it's pretty good.

11, Listen to music again; This is another happy tune. techno, kind of typical pop/dance.

12. For Your Entertainment: This is the Title track? It's not bad, but, i would have picked a different song to lead this great album. But, hey. Whatever floats your boat. I think some of it kind of sounds like Clay Aiken. Strange how he sounds like so many different singers,

13. Strut: this isn't a bad song, and should probably be higher up on the list. but, it just doesn't compare to the rest of the songs on the album. too many words repeated. It does have a nice slow Freddy Mercury vibe mid song, but other that. it's just ok

14. Dream. I wasn't shocked when I heard this was a movie song. It just had that feel.

So, I guess that is all I have to say about this CD. I would give it a 10 out of 10 rating. As being excellent. How anyone could not like this CD is beyond me. It's just very good. If you have it, I would like to hear your opinions!

Rate The Idol Boys. Which do you like Best?

I'll give you 10 former American Idols Pick the ones you like best.

Here is a list of other American Idol Stars that I currently have in my collection. I will give a more detailed discription of each star in their own hubs in the future, So, this list is just a basic list of the other CD's I have. I am listing them from Best down

This by far the best album to come out of American Idol. Chris Daughtry has the most powerful singing voice you will ever hear. The Daughtry album is on par with some of the biggest rock bands in music history, and I can say it is even better than most. If you are a fan of Mettalica, Poison, AC/DC, or Aerosmith. I think you will love Daughtry. It's that good.

Clay Aiken is no Daughtry, but, he is probably one of the most successful entertainers to come out of American Idol. This album just sold so many copies so quickly, like the Daughtry CD, it shattered sales records within days. It is a great album if you like mellow Pop. This CD can be compared to music by Billy Joel, Elton John, George Michael, and a little Barry Manilow.

His self titled album is very similar to Daughtry. While not quite as impressive, The album is good. I will have to give it another Listen. however, with that said. David Cook is probably my fourth favorite entertainer to come out of American Idol. Daughtry, Adam Lambert, and Clay Aiken, would be the other 3. But, I don't have Kelly Clarkson or David Archuletta yet.

Audio Daydream is a different album. It's very club-ish. but, more for the younger crowd. It Does have some very good songs on it. But, not quite into it yet. But, I rotate my CDs and give each one attention. So, maybe it will grow on me.

Oh my god. I loved Fantasia when she was on American Idol. Even though It was a toss up between her or Jennifer Hudson, I was certain that once Jennifer was voted out, Fantasia was going to sail through to the top. And she did. her debut album "Free Yourself" is just ok. But, having her amazing version of "Summertime" and "believe" on the CD makes it worth it.

Well, how does last years Winner end up with a so-so placing on this list? With a So-So CD. I'm not saying it's horrible. Some of it is actually pretty good, but a lot of it is just kind of boring. This sounds to me like music you would hear in a Jazz Cafe. One guy with a guitar singing songs of love and loss. But, there is one laughable song where he sings about his hommes.

For those of you who are looking for more news on what Adam Lambert is doing these days, all you have to do is go to Youtube, and you can find some nice video footage of some of his concert stops on the Glam Nation tour.

There are a couple good recordings of Adam performing "Fever." to what sounds like a packed house in Springfield. The crowd really seems to enjoy his on stage antics, and, only cheer as he kisses another man on stage. (But, it seems that it is staged, as it happens at the same moment at every venue.) But, still, it looks like he did as everyone has hoped, and put together a great show.

I'll see if I can find one of those videos and post it here soon! I had to delete the Grand Rapids performance from the idol tour, because it appears that it is no longer available. He also seems to have taken "Mad world." to a different level in his show.

I recently purchased Adam Lambert's Trespassing music CD, and I think he is going to have another big hit on his hands! "Trespassing" is a bit more edgey than "For your Entertainment". Some of it is kind of Loud, and, in your face. But, what is great about it, is that he continues to show that he is not afraid of who he is as an Entertainer. It also has a lot of sexual messages, if you get it, and if you don't. you probably never will.

Some of the stand out songs on this album are really funky. My favorite is "Shady". Like "Fever" from his previous CD it has a great beat. I also like Cuckoo, because that is exactly how I feel when I want to party. I think both songs speak to the club crowds, and masses of shirtless guys who just want to have a good time, and don't give a s#$t what anyone thinks. A kind of an open your eyes! We're here and we are not going away vibe. In a good way. I also like Choke hold, reminds me of Gaga's "I like it rough." Only a lot better.

Other songs of note are the title song "Trespassing", "Never Close Our Eyes", and "Better Than I know myself." Naked love is also an interesting tune, and once again has sexual meaning, mixed with soul. But the most haunting song on the CD is "Underneath." It's actually kind of creepy, and reminds me of "Sleep Walker." But much darker. He very much sounds like he is reaching into his soul and ripping his emotions from his body in Underneath.

The final song that impressed me is a very simple ballad called "Outlaws Of Love." IF you ask me, this song is a direct line to the gay community. If you are gay or lesbian, this song will certainly touch you in many ways. I think he could have made it a bit longer, and more emotional. But, it's a song with a message. Here's a lyric that connects with me. "they say we'll rot in hell, but I don't think we will. That says a lot. It would be very cool to hear a large audience singing those words. It would be very emotional to whom it matters. It matters to me.

If you watched the Youtube video of Adam Lambert singing "Fever". You must scroll through his other live performances and find his Live coustic version of "Aftermath." This version is totally different the the version on "For Your Entertainment." And, you can tell that it is done live. (No lip-singing like some vocalists.)  And, he really shows how great of a singer he really is. I very much enjoyed watching it. I think you will like it too. 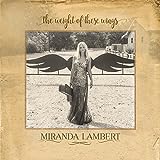 The Weight of These Wings
Buy Now