So what is Classical Music?

For most people Classical Music is a term coined by record companies to describe anything that doesn't come under the giant label of "popular music" but this misuse of the term classical music is a pet hate of mine. Classical music is not Liberace playing piano and it is not opera trained voices singing songs from the shows. It certainly isn't Tchaikovsky, Stravinsky or Debussy. No way is Purcell Classical, yet you will find all of these in the "classical" bins at record stores. This article is intended to put that right. It may not matter to anyone when they are buying CDs of MP3s of "classical music" that what they are buying is an fact not "classical" at all, but Renaissance, baroque, romantic, impressionist or modern; but this, to me, is like calling all popular music "rock" and including jazz, rap and folk under the same label. So what is Classical Music?

Your first clue is the intro image I have uploaded. This is based on a posthumous portrait of Wolfgang Amadeus Mozart by Barbara Krafft. The epitome of classical music and perhaps the ultimate classical composer was Mozart. Other names of note are C.P.E. Bach, J.C.Bach, Michael Haydn, Stamitz, Josef Haydn and early Beethoven. Brahms is often called a classical composer too but both Beethoven and Brahms were writing in a new, for some much more exciting genre called Romantic Music. (This has little to do with love and is best left to a different article.)

So what were the characteristics of Classical Music and who was writing it?

You might enjoy exploring some of these favourite pieces of mine.

I love Mozart's Flute and Harp Concerto and I am sure you will too. 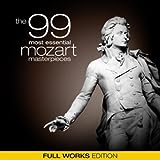 The 99 Most Essential Mozart Masterpieces (Full Works Edition)
In his short life Mozart was incredibly prolific as a composer. This collection does not even begin to scrape the surface but arguably includes some of his most popular and important pieces.
Buy Now

The Creation by Haydn

The Creation is an oratorio by Josef Haydn, a powerful and original piece.

The Concerto is a form popular in both classical and Romantic Eras. Beethoven's 1st Piano Concerto is undoubtedly classical in style. 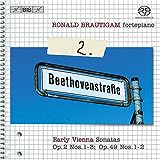 Beethoven: Complete Works for Solo Piano, Vol. 2 - Early Vienna Sonatas
I chose these examples of Ludwig van Beethoven. I can't omit him as a Classical composer, but really he was far too adventurous and radical as a composer and soon outgrew the influences of Haydn and Mozart. He is THE composer and expresses styles only fully explored after his death. Beethoven's early sonatas and first two symphonies definitely fall under the "classical" umbrella.
Buy Now

A modern trumpeter, a classical concerto!

Carl Stamitz was a classical era composer who popularised the clarinet and wrote several clarinet concertos. 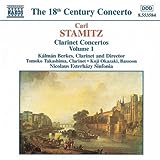 Stamitz, C.: Clarinet Concertos, Vol. 1
The clarinet is possibly the most popular woodwind instrument. Before the classical era it was virtually unknown, but Stamitz brought it into the orchestra on a regular basis. Stamitz also wrote many symphonies, cello concertos and much more.
Buy Now

Brahms was called "the arch classicist" by some. His music straddles Classical and Romantic Eras, but he wrote some gorgeous big tunes. Listen to the one starting at 4 minutes 53 seconds. You might know it under a different name!

Overture: Adriano in Siria / Symphonies 1 4 & 6
J.C. Bach (Johann Christian or simply "John") was one of Johann Sebastian Bach's many, many children. Also known as "The London Bach" or the "English Bach" he was one of the earliest developers of sonata form and the symphony (which he called sinfonia). His works are shorter than later symphonies but they are lovely. His concertos influenced Mozart greatly and although eclipsed by his father's catalogue he is worth listening to.
Buy Now

The chief developments of the classical era were sonata form, the symphony, the concerto, a much simpler style of music than had been popular in the Baroque era and the development of the orchestra as the main vehicle of instrumental expression.

Previously music had been mostly "contrapuntal" and what this means in terms of sound is that several tunes played simultaneously. That might take the form of a "fugue" (as in Bach) where the tune keeps coming in against itself and is developed along the way. The style is ornate and complicated. The style of the Classical Era was much simpler. A tune would be played with an accompaniment based on chords. The tune itself would be simple but would be developed in formal ways to be interesting. Sonata form involved introducing one simple tune (first subject) then another (second subject) in an "exposition". The tunes would then be developed in some way, sometimes by changing the length of notes or perhaps by changing the key of the tune and taking it through a whole series of key changes (modulations), perhaps taking part of the tune and making it into a new one. This would be the "development" section. Finally the first tune would be restated and an ending would be written. This is the "recapitulation".

This is my attempt at a simple explanation, so forgive any omissions, but basically a sonata is a lot simpler to follow and to understand than a fugue! The main instrumental forms of the Classical Era were the Symphony, the Concerto, the Sonata and the String Quartet. Sonata form tend to run through all of these in some way or another. Also the basic simplicity and "tasteful" quality of music by Mozart and Haydn lent it a refinement that was very much in keeping with the spirit of the 18th century and the "Age of Enlightenment".

As the main form of instrumental music became the symphony it was easy to see how the orchestra developed in this era. Patrons employed composers and they also employed their own orchestras to play the music. Orchestras were smaller than those today, but usually had set instruments so they were geared up to play the modern music of the day. The orchestra became formalised. In the Romantic Era the orchestras became much bigger and employed more and more new instruments as composers became more adventurous. The image is a painting by Degas which shows a small pit orchestra at the ballet, this is a Romantic Era venue, but the size is closer to Classical.

Music by Classical Composers - The main names in the Classical Era

Main players in the Classical period were Haydn and Mozart. Both were highly prolific composers and perfect masters of musical form, particularly the symphony which is the main musical development of the Classical era. 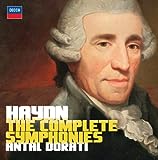 Haydn: The Complete Symphonies
I would be happy to have composed one performed and recorded symphony. Haydn composed well over 100 and they are masterpieces of form. In addition he wrote wonderful string quartets and vocal music such as The Creation oratorio.
Buy Now

So I know about Classical Music. Where do I go to next? - Other "Classical" Music pages you might enjoy

Well, I promise you these are not Classical Music pages at all, but they definitely fall under that broad catch all classical label. I wrote them to be enjoyable, so please take a look.

Who is your favourite Classical Era composer? - Here is you chance to vote for some actual Classical music.

Think of music you have heard from the Classical Era. Who is your favourite composer?

As a youngster I studied music history, so this page has been simmering for some time. I do hope you enjoyed it and will explore the Classical Era for yourself. Thank you for visiting.