During a recent meditation my mind brought forward how different my parenting was from my own parents. In those moments of contemplation I wondered how that came about and who my early influences had been that pushed this shift. Later, I realized that it ultimately meant transitioning from hanging onto ‘their’ beliefs to acquiring beliefs of my own.

In my early experience, as a neighborhood babysitter, I did not give much thought about the early development process. I was twelve and by the age of sixteen did routinely what I saw my relatives do: direct, (or in my childish mind, ‘order’), my younger siblings and kids I sat for. As for the babies-well, if they were quietly playing by themselves or sleeping, I didn’t disturb them, opting instead to read a book.

At age sixteen I had three part time jobs: one with the city as a library page; another with the school system teaching ballet; and babysitting. It was through my girl friend that I accepted a coveted position with an unknown family; a college professor, his wife and their six month old daughter, as a mother’s helper.

Up until then I had never heard of a ‘mother’s helper’ or gave any thought about how that differed from being a babysitter, but meeting Myra, a young, outspoken, Jewish woman was a moment of God’s grace that would forever change the world of this unsophisticated, Catholic teenager in many ways.

Myra blew my mind. She talked to me like I was an adult; like my opinion mattered…like I even had an opinion. She washed off the lids of canned goods before opening them, explaining to me that there was often dust on them. I thought that was quirky. Who does that-certainly, no one in my household? But, most of all she talked to her baby differently…like this six month old knew what she was saying! In my smug adolescence I was amused-by that and her insistence that I read...READ, (not look at), picture books to a baby as if she understood words.

As she went about her Myra-ness she taught me, explaining why she did what she did and role modeling a type of parenting that I had never observed before-one of direct interaction; of accepting an infant at the moment of its birth, as an intelligent being that absorbed everything in its environment. Myra blew my consciousness wide open.

No longer content to go back to the place I had been jolted from I began to look at my world with a different eye, observing, contrasting, comparing. I questioned what I previously had accepted as truth in the way things were, because clearly, life was very different in other homes.

After two years of working for Myra a second shift occurred. It was the early 70’s, I was a senior in high school, and our family was going through changes that began when both my parents returned to school. While at the community college my parents met the campus priest, who had started services called the Newman Mass. They embraced Father Tom, often inviting him to dinner. Long discussions about the world, politics, education, etc. occurred around our dinner table.

One week, Father Tom announced that the Montessori Preschool, which was part of the Detroit congregation he was assigned to, needed volunteers to help the nuns with their field trip to the Detroit Zoo. I volunteered not realizing this was going to be another pivotal moment in my life.

I had no idea what a Montessori school was or how it differed from other preschools, and the explanations that it was a ‘method’ confused me even more. Weren’t all preschools the same? Kids enrolled, they played, and they went home. End of story.

As I walked into the inner city preschool I was greeted by the director of the program, Sister Agnes. She graciously gave me a tour of the school, explaining the work stations and offering a synopsis of the Montessori philosophy. I was intrigued.

Maria Montessori was a medical physician and psychiatrist who worked at the University of Rome psychiatric clinic, observing that the children she treated had a desire to learn activities.  Later she became an educator.  She is well known for her contributions to education and developed the process of learning that is known as the Montessori Method .  In her observations she discovered that learning began at birth and new information was absorbed predominately through age six.  After this age, the natural process of absorbing and integrating material slowed.  All situations, good, bad, pleasant and traumatic, are soaked up in direct learning experiences.

The most valuable learning time is age 0-6

I was enthralled-intelligence occurred before the age of five…before formal education? I had never thought of it. I always believed that if you were lucky enough to have siblings older than you, there might be some early learning that preempted starting kindergarten; otherwise, you learned when you got to school.

To have an intentional and purposeful teaching environment through interactions with toddlers who explored their world was a different concept. I read everything I could that pertained to Maria Montessori’s methods and decided I wanted to become a Montessori teacher. I wanted to be instrumental in giving preschoolers opportunities to master their environments and unleash the human potential of their souls.

Get to Know Your Parenting Style

Although my life took a different career path, the early influences I had from both Myra and Maria Montessori shaped my parenting in a direction quite different from one I grew up with.  When my mother and father became parents they were products of their culture, their formal education, and their home life.  My willingness to keep an open mind about more effective parenting styles than what I was raised with was an important factor in my evolvement as a future parent.

Today, I am the proud mother of two wonderful daughters who have found their own paths of effective parenting, influenced at some level by what their experience was growing up.  I know that the role model I set for them was part of what they have incorporated.

Have you considered your own early childhood experiences and the type of parents you had?  Are you a parent that did things differently than your parents?  Who were your early influences?

If you have ever thought about how you became the person you are today or wondered how your kids became the way they are, explore these questions and see where the answers may lead you. 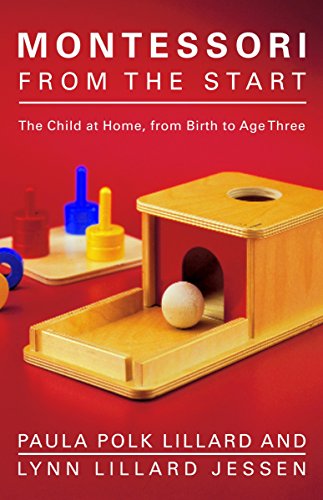 Montessori from the Start: The Child at Home, from Birth to Age Three
Buy Now