September 4, 2012, my eighty-eight year old mother was diagnosed with having cervical cancer. We had no idea that she was sick, as she had not had any symptoms until she began to bleed on September 3, 2012. She told me in the car, on the way to emergency, “I have a feeling that this is going to be the beginning of the end for me,” and I told her to stop talking that way, I said she was being negative. As it turned out, what mom was feeling proved to be true.

My mom worked full time until she was forced to retire at age eighty-five, because she had gotten hurt at work. She was never sick, other than allergies, so, for her to be diagnosed as being terminally ill was unfathomable. Mom made the decision to do nothing, and just go for quality of life, as one of her doctors recommended. We as a family backed her completely on that decision.

It’s amazing how everything changes when someone you love gets sick, and you know that they’re not going to get better. All the things that were so seemingly important before, take a back seat to your, now, terminally ill loved one. Time becomes more precious, and the littlest things that normally wouldn’t mean much, you hold on to for dear life.

Mom got through September and October pretty easily, but in November things began to escalate. On Thanksgiving Day, mom had to have an emergency procedure done to stop the bleeding again, and she was never the same after that. She didn’t get up and get dressed anymore. She didn’t play the piano or write letters to her older sister anymore. The rest of her days were spent deteriorating in bed. That was the most difficult part; to have to watch her deteriorate a little more each day, and there was nothing we could do to help her. Thankfully, mom’s doctor arranged for her to have Hospice care. Optimal Hospice was a Godsend. I can’t say enough good things about them.

January 22, 2013 I had a hard time waking my mom up. When she did awaken, a big change had happened while she was sleeping. Her facial expression looked different, her eyes looked far away somehow, she didn’t make eye contact very well, and her speech was mumbled, barely understandable. I thought maybe she had suffered a stroke. The Hospice nurse came and said that mom was in “Transition,” that she was preparing to pass on. I didn’t even know how to process that. I knew that I didn’t want mom to have to suffer on, but it was hard to face that her life would soon be over.

Mom passed away a week later. It was just one month shy of her living with us for twenty-five years. She was an interval part of my every day. Mom was my best friend and now she was gone. I had to figure out how to live with only memories of her.

I had found a really nice memorial sight online, so my brother and I put our efforts in to honoring mom in that way, as she didn’t want a funeral service. I have to say, that it has been a big help having the memorial to work on during this very difficult time. It became part of the healing process.

The world didn’t cease because my mom died. The winter is passing, and spring will begin, but nothing will be quite the same ever again. I would encourage anyone who is taking care of a terminally ill or elderly loved one, to get their memories down in writing. Ask them to share stories from their past, so that you can record their thoughts, to be able to pass on to their grandchildren.

Memories left behind should be like the newness of spring, not the fading of winter passing.

Caregiving for Your Terminally Ill Loved One 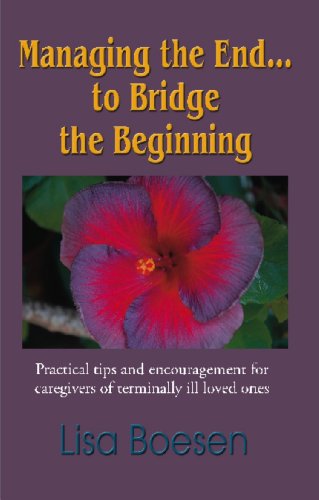 MANAGING THE END...TO BRIDGE THE BEGINNING: Practical Tips and Encouragement for Caregivers of Terminally Ill Loved Ones
Buy Now