For many centuries pearls have been highly valued as objects of beauty. The word pearl has become a metaphor for something very rare, very fine, very admirable, and very valuable. This is the description that I give to my mother; she is a rare pearl indeed.

She drives my siblings and I crazy and always has, she is impossible at times and a hypochondriac that we have all humored for many years, oftentimes sitting with her for hours at a time indulging her imaginary illness’s. But we do it because she is our mother, we sincerely care for her well being and although she didn’t give us many material things throughout our lives, she has given us love and made us the people who we are as adults. As crazy as she drives us sometimes, we love her, I love her very much.

My mother was born on March 6, 1934 in Mexico in a small ranch way out in the sticks. Her father was a butcher by trade and her mother died when she was a toddler. Her father married this witch of a woman who would be my mother’s caregiver; I call her this because she was never by any stretch of the imagination a real mother to her. My step grand caregiver was a very cold, distant woman who I think her face would break if she ever actually cracked a smile. And I remember visiting her when I was a child and being scared to death of her. She and my grandfather had several children together and although my mother came first, she was treated like a step child by everyone.

She was regularly beaten by everyone in the family and was made to do all the chores. Her step mother would often tell my grandfather all these lies about my mother when he got home from work so she could get into trouble. My grandfather beat her so severely once that she couldn’t get out of bed for days. I think of my mother as a little girl and wonder what got her through those years. I cry to think of her as that little girl without her mommy.

When my mother married my father she was 20 years old and he had already been married a couple times, I am sure that he swept her off her feet and she was more than happy to be leaving her so called home. This is how she ended up coming to the United States and became a U.S. citizen. Her father died years ago, but ironically her stepmother is still alive and is in her 90’s. My mother still calls her and sends her letters and cards for her birthdays and holidays and has always been good to her, regardless of how she treated my mother. This is where that rare pearl comes in.

My father died in 1992 leaving my mother on her own, she was always a homemaker and never held a job as she was never educated in anyway, except for maybe a couple years of grade school. She lives alone despite my siblings and my protests. She always says she doesn’t want to be a burden on anyone but doesn’t realize it would make us feel better that she not be alone.

I don’t know if it was my mother’s upbringing or hereditary or what, but she has had a lot of emotional and nervous conditions, which she is on medications for. My mother has always been a very religious person as well and I think that is what gets her through. When we were teenagers she had this idea that everything that was fun was a sin. I guess all those times going to her church with all that fire and brimstone, turned me off for many years to religion and church. For many years I resented my mother for being like this, now I just understand.

After many years of living away from my mother, doing my own things, getting married, having children, I have come back to my hometown, mainly to spend more time with my mother and to try to make up for lost time, if that is ever possible. I spend as much time with my mother as I can and there are times when yes I don’t feel like being around her because of her complaints, her neediness, and I ask God to forgive me for feeling like this. But I try to spend time with her, talk to her, sometimes we go out to lunch and sometimes we just go out for a walk.

One day not too long ago I took her to the grocery store to get a few things and watched her as she collected some strawberries and put them in a produce bag and I noticed her hands, I always thought that my mother had beautiful hands and she still does, even at the age of 75. I was looking at her hands and remembering how they comforted me many times as a child and how warm they always felt to the touch. I thought with all of her faults and emotional crippling, how she raised a family, a large one at that; without yes the traditional education but also without the maternal education that was never shown to her. I applaud her for this and understand how hard it is at times to be a good mother.

I don’t know how much longer my mother will be with us, she will probably out live us all, but my sister and I have had this conversation and we both wonder what the heck we would actually do without my mother calling us everyday wondering why we haven’t called her, and how much we would miss that. My sister stated that when my mother passes she would never drive down her street again because it would cause her too much pain. I know what she means because it is hard to wonder what life would be like without this rare pearl in our lives, I know that it certainly would be a little colder. 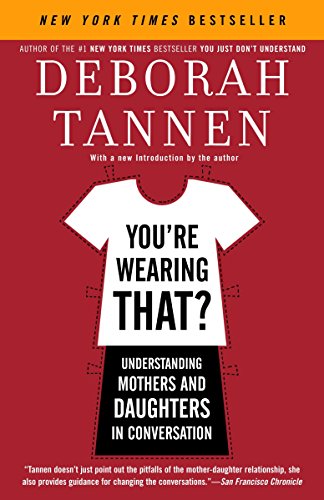 You're Wearing That?: Understanding Mothers and Daughters in Conversation
Buy Now