12 Foods to Cook in Your Coffeepot 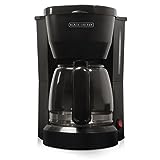 Did you know that your coffee pot can be used in a pinch to prepare all sorts of different meals from Ramen noodle soup to a plate filled with broccoli? If you live in a studio without a full kitchen or in a home with a stove that goes out, you can try making these 12 foods in your coffeepot:

3. Oatmeal. Basically any item that only requires you to add hot water to it to become a meal is going to be an item that you can easily cook in a coffee pot. You put the water into the machine like normal and you put the food item into the pot. In this case, you put the oatmeal in the pot and let it cook. You can play around with different water amounts to get the consistency of oatmeal that you prefer. You may also consider using milk instead of water although this has the potential to negatively affect your coffee maker; see the warnings at the bottom of this article.

6. Poached Chicken. A report from Gizmodo indicates that you can actually poach chicken instead of a coffee maker. You can follow the link for full instructions but basically you put water and chicken into the pot itself and then use the heating function of the machine to poach the chicken. The Gizmodo recipe actually also shows you how to cook couscous in the coffee pot.

7. Poached Fish. You should be able to poach fish steaks in the same way as you would poach chicken in a coffee maker.

8. Couscous and Rice. Speaking of couscous, that’s another item like oatmeal that you basically just need to add hot water to in order to cook it so it cooks well in a coffee pot. Similarly you can make instant rice in a coffee maker using the same process.

9. Pasta. This is the same story told again with another type of food. Put the pasta of your choice in the pot and the water through the machine and cook until the noodles are tender enough for you.

10. Beans. There are some beans, such as lentils, that cook easily primarily by soaking in hot water so they can be made in a coffee pot too.

11. Eggs. Apparently you can both soft boil and hard boil eggs in a coffee pot. The eggs go into the coffee pot. The water is put through the machine so that it gets hot and drips onto the eggs. Add enough water to completely cover the eggs with water. Let the eggs sit in the water for 12 minutes for a hard boiled egg or less for a soft boiled egg.

12. Chocolate Sauce. Basically you run a little bit of water through the coffee pot so it’s hot then you add a little bit of cream to the hot water and add some chocolate chips or some broken chocolate bars into the pot and let it melt into chocolate sauce.

Although reports online indicate that you can safely make all of these foods in your coffeepot, there are two warnings that I want to add as a caveat to the rest of the article. The first comes from an article by Geekosystem on this same topic (a resource I used when researching this article), which warns you to:

“Keep in mind that when cooking with unconventional methods, you run the risk of producing sub-par food and maybe exposing yourself to the dangers of undercooked food. Attempt at your own risk.”

And the second is just a thought of my own, which is that you may run the risk of damaging your coffee maker when you cook foods in it that aren’t intended to be made in a coffee pot. Perhaps I’m just paranoid because my coffee maker is the most important kitchen appliance I own but I’d definitely be wary about that issue when considering cooking food in it.