Airsoft - an extreme outdoor sport and how to play it!

Airsoft is a sport

Airsoft is a sport that has evolved out of or alongside paintball. The objective of an airsoft game is to shoot your competition with replica guns while avoiding being hit yourself. Quite simple actually! People have done this since the beginning of warfare...and its still fun!

The unique feature of airsoft is how realistic it looks. I bet that from 20 feet away you would not be able to tell an airsoft gun from a real gun, unless you are a military person or a gun buff.

The feeling of putting on full camouflage, sometimes even applying camo paint to your face, putting on a vest and boots, and holding a full size, realistic weight airsoft gun is incredible! 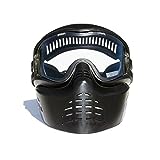 Airsoft in the United States

Airsoft existed for a long time, but tended to stay a rather obscure sport, for 2 reasons:

Things are changing now! A lot of airsoft gun production shifted from Japan and Taiwan to mainland China, where airsoft guns can be made cheaply! This, like never before puts full size airsoft replicas within the reach of an average teenager! Bring on the airsoft fun!

What will you need to play

Airsoft, like paintball, requires eye protection. Most airsoft projectiles use less than 1.8 Joules of energy (compare to 400 joules of a 9mm bullet), but can still damage teeth and eyes. For this reason, full face eye protection is recommended whenever airsoft guns are present!

While airsoft hits sting through clothes, the pain is minor and disappears rather quickly in the heat of the action. Like in paintball, the other area that you should protect are your knuckles. Because of the way you hold your airsoft gun, your knuckles are exposed and this is why paintball gloves are strongly recommended!

For most skirmishes, having a tactical vest is useful, along with a set of combat boots. When playing in the woods, be sure to follow these tips to avoid tick bites! 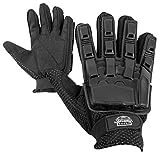 Airsoft guns are classified as toys in most states, because they shoot 10x weaker than air rifles (airsoft guns shoot at less than 2 joules, air rifles shoot at 20-24 joules). Chances are if you see air rifles for sale in your local walmarts, airsoft guns would also be legal in your state. Don't take my word for it though, and double check!

Airsoft guns, due to their keen resemblance to real firearms are restricted in some cities that try to reduce crime. New York City and Washington DC come to mind. It's rather simple - don't host a game in the middle of New York City, or you may cause a mass panic!

Airsoft guns come with a blaze orange tip, usually measuring 1/2 of an inch. In some cases, the entire flashhider is painted orange. This is to distinguish airsoft guns from real guns in transit. I would strongly recommend leaving the tip in place or at least saving it.

Some cheap airsoft guns come made of clear plastic. This makes them reasonable children's toys (still need eye protection), but most airsofters scoff at that notion!

Every time you play, you sign a waiver of certain rights. This ensures that people you shoot cannot sue you. Do not shoot pedestrians, squirrels or anything else, or it may sue you!

If you like other military games and would like to try something else, there are 2 other excellent options: