Furreal Friends have been producing toys for around ten years now. They make cuddly soft interactive animals that respond to human behaviour. One of their most impressive products came out back in 2006 and this was called Butterscotch Pony. This was a very large life like pony that would respond in many different ways to a child’s touch and movement. Six years on the company are looking to build on the success of this impressive toy and they are bringing out Baby Butterscotch My Magical Show Pony. So let’s take a look at her. 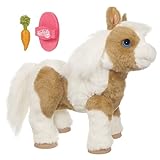 One of the issues with the old Butterscotch and also a similar toy called Smores, was the price. To buy one of these toys you were looking at having to pay upwards of $400. Admittedly the toys were quite stunning, but for that price many people were put off from buying them. That is one of the reasons why the company behind Furreal Friends have decided to bring out a smaller version of this classic toy. So the new version will retail at around the $120 mark. As for release date we have been told it will be sometime in the fall of 2012. The exact release date is not yet known but we are sure she will be released well before Christmas, so plenty of time to get hold of one for the holidays.

UPDATE - Well the people at Furreal decided that we were ready for Baby Butterscotch so she is now out there available to buy online. This came as quite a surprise but the fact is toy companies often try to get things out that little bit earlier than originally expected.

So you are probably wondering what exactly Baby Butterscotch Pony can do. Well at first glance this new toy seems to be the most impressive of all the Furreal Friends toys. The level of interactivity is wonderful and of course there is the cute factor, this little pony is simply adorable.

The technology behind this new pet is very impressive. There are six different sensors spread around her body, three on her back, one on her nose, one on her cheek on one on top of her head. All these basically mean is that she will respond to various touches and movements. So for instance, stroke her cheek and she will nuzzle up to your hand. Touch her back and she rolls her head back and neighs in delight. Her ears move when she is happy and if you pick her up and cuddle her she will actually move into your neck and snuggle with you.

As well as all the interactive elements she also has legs which move so you can adjust the position she is in, as well as standing her up you can also have her sitting or even get her to lie down. Along with the pony itself you also get two accessories. One of these is a carrot, you can feed Baby Butterscotch this and she will chomp away on it happily until you remove it from her mouth. You also get a brush so you can keep her neat and tidy as you groom her hair and fir.

More From Furreal Friends In 2012

Furreal are not putting all their eggs in one basket in 2012. Although Baby Butterscotch My Magical Show Pony does look like doing very well for the company, they are also releasing several other toys over the course of the year. Some of these are larger more expensive ones whereas some are cheaper and smaller. So here is a brief run though of some of the new toys we are going to see brought out in 2012.

First up then is the Gogo Puppy Glitter Edition. We have already had a very similar version of this pet which was called Gogo My Walking Pup. This new toy is very similar to the old one but it comes with added glitter. So basically a slightly cuter version of the old toy, if you considered buying the original version, you can go for this one instead now.

Then we have Hop n Cuddle Bunnies. There are a few of these coming out over the space of the year. These basically jump around when you stroke them and as always they make cute little sounds. They are very cuddly and cute and will retail at somewhere around the $20 mark. The cutest of these looks like being the lop-eared bunny which has a release date of sometime in the fall.

One product that is already out there is Snuggimals. These are small pets that move around when you stoke them. Furreal Friends are releasing new Snuggimals in 2012 and some of these even come in their own little house. Plus they are releasing a few called Walking Snuggimals which go for a nice little walk when you press their backs. These retail at around $10 so they are a good cheap option. There will be various new ones released throughout the year.

One of the most exciting new releases of the year is going to be Bouncy My Happy To See Me Pup. When it comes to the cute factor this one certainly takes the biscuit. This impressive looking puppy uses a light sensor to detect nearby movement, so approach her and she starts jumping around and yelping excitedly. Plus there are the usual touch sensors which give this toy lots of interactive responses.

As you can see Furreal Friends have been very busy releasing lots of new toys in 2012. The most exciting of these will probably be Baby Butterscotch Pony and we are expecting to see very good sales for this one over the Christmas period. As the release date for Baby Butterscotch approaches the excitement will no doubt build, kids who have the original Butterscotch will no doubt want to get their hands on this Baby version as well. As you can see from all the new toys coming out, 2012 looks like being a very exciting year for fans of Furreal Friends.