Today we are going to be looking at Bouncy, My Happy To See Me Pup which is one of the latest releases from the Furreal Friends line of toys. We will give you release dates, prices and lots of other information about Bouncy, My Happy To See Me Pup. If you are a fan of Furreal Friends and want to know what new pets we are going to be seeing later in the year, then we will also tell you that on this page.

Furreal Friends have been making toys for ten years now. They specialise in interactive pets which children can cuddle and interact with at the same time. Over the past decade we have seen some fantastic innovative toys from this range and they are constantly improving their technology and bringing out even better toys that children will love. The company behind Furreal Friends is Hasbro, they are a company with vast experience in the toy industry and they are always looking to be one of the market leaders when it comes to fresh new toys. One of the latest releases from Hasbro Furreal Friends is this one, Bouncy, My Happy To See Me Pup. So let’s take a look at it. 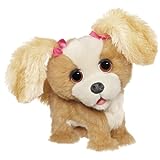 So Furreal Friends are looking to bring out this new pet in the fall of 2012. There is no official release date at the moment for Bouncy My Happy To See Me Pup, but soon as we get one we will update this page and let you know the release date. We assume Hasbro will want to bring it out well before Christmas so we are guessing it should be sometime in September. In fact now the toys have started showing up online so they should soon be widely available. As for price we are expecting this one to retail at around $60, although as we get close to the release date that may be subject to change. So what exactly can this new pet do?

Well what makes Bouncy so special is that the toy uses light sensor technology. Something we don’t believe we have seen before in Furreal Friends toys. This basically means that you don’t even have to touch the toy for it to respond. As you approach Bouncy the sensor will pick up your movement and then your pup will start jumping up and down and yapping excitedly. The sounds that come out of this pet are very cute indeed and of all the Furreal Friends toys this has to be right up there when it comes to the cute factor.

Along with the light sensor there are is also a touch sensor on the back of Bouncy. So stroke her back or pet her and she will stop jumping and settle down and make softer puppy noises that are again designed to be very cute. Now you can give her a cuddle and show her some affection, the pup will make happy sounds while you do this. Place her back down and she will start jumping around happily all over again.

On of the biggest appeals of this toys is the look. As you can see she is simply adorable. With her big floppy ears and dark eyes she is the kind of toy that little girls will instantly fall in love with. Although there are other Furreal Friends toys that are more interactive and have more responses, when it comes to cuteness then Bouncy really does steal the show.

As well as Bouncy, Hasbro are also bringing out lots of other Furreal Friends toys in 2012. One of the most eagerly awaited ones is Baby Butterscotch My Magical Show Pony. This is a smaller version of the notorious giant Butterscotch Pony which stood at around 4ft tall and cost almost $500. This smaller version is much more affordable with a price of around $120 and we are expecting this one to be available in the fall, plenty of time to pick her up before Christmas.

Snuggimals are a popular line of toys that this company has brought out. These are small cute little pets that shuffle around when you press their backs. They are quite cheap in price so children often like to collect them. Later in 2012 Hasbro introduce Walkin’ Snuggimals which as basically jazzed up versions of the originals. These come with a cute little lead and they will actually walk along when you press their backs. We are expecting them to be a little more expensive than the standard versions but they should still be fairly cheap compared to some of the larger pets on offer.

A relatively new range of toys from Furreal Friends are the Dizzy Dancers. These are often described as BeyBlades for girls. They are little spinning tops that are dressed up as animals. You can interchange the top and bottom halves to create new spinners and you can also buy accessories for them to spin in. In the fall of 2012 Hasbro release deluxe versions of these toys, they will sing and light up as they spin. They are going to be priced at around $14 which is a little more than the original versions.

Hasbro and Furreal Friends have a few more tricks up there sleeve as well when it comes to new pets for 2012. The company behind these toys are looking to bring out lots of new ideas and keep children coming back for more. We are expecting Bouncy, My Happy To See My Pup to sell very well over the holiday period and no doubt this one will be on many children’s wish list over the coming months.