Series 5 came out in August of 2011. As usual the set contains 16 minifigures and there is a wide range of characters on display. This time round the mystery bags you buy the mini figures in have dot codes on them and if you can find a way to read the dot codes you can work out which character is inside. But before we get into all that let’s meet the gang. 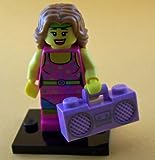 So as we said there are 16 characters to choose from. Lego have tried to bring out completely different characters and give children as much variety as possible. So let’s have a look at the list: Boxer, Cave Woman, Egyptian Queen, Clown, Evil Dwarf, Ice Fisherman, Fitness Coach, Gladiator, Gangster, College Graduate, Lizard Man, Lumberjack, Royal Guard, Detective, Zoo Keeper and finally a Snowboarder. So that’s the list of characters you get in series 5.

As is the norm with the Lego Minifigures each character comes with their own bio and their own accessory. For instance the boxer comes with helmet and gloves, the snowboarder comes with a snowboard and the gladiator with sword and shield. You can buy the many of the figures individually over on Amazon or you can buy them in the mystery packs. Some people like the excitement of not knowing which figure is in which pack, whereas other people would rather just buy each character so they know what they are getting. The idea behind these though is that children can swap figures which each other thus collecting the entire set.

When Lego first starting bringing out the Minifigures the first few series had a specific barcode for each figure. This meant that if you could work out which barcode was on which pack, you could find out which minifigure was hidden inside the pack. Lego got wise to that and so changed the packaging and stopped relying on barcodes. With this series there are a selection of dots on each pack, this is known as a dot code. There are sites out there offering pictures of which codes go with which character, but some of the information seems to be incorrect and so we didn’t want to publish anything here that would mislead people.

Another more simple way to try to work out which Minifigure is contained in a pack is to simply feel the character through the bag. For some of the characters you can work out which one it is likely to be by the accessories they are holding. For instance the evil dwarf has a pretty unique helmet and the snowboarder has a fairly large snowboard with him.

We are up to series 5 now of the Lego Minifigures. These seem to be growing in popularity with each new release. You can buy individual lego minifigures or even the full sets over an Amazon. These make great stocking fillers at Christmas as they are small and cheap to buy. There is a great variety of these figures available and children love to play with them and if you get a few kids together who collect them they are ideal for swapping.

Series 6 is said to be out in early 2012. There have been a few rumours about series 6 but as yet nothing definite about what we are likely to see and what figures will appear. Lego are constantly updating their toys are there are many out there that are great fun. This is a business that has been going strong for many years and as they continue to bring out new and exciting toys their reputation for high class toys seems to grow and grow. Hopefully this article will have told you everything you need to know about Lego Minifigures series 5. Now all that is left to do is go and collect all 16.