My Favorite Video Game Commericials Ever

Before I was the age of 13 or so, there was no internet in my house, nor in any of my friend's houses either. Now video game fans read rumors sometimes years before a game even comes out. Back then, usually the first preview you ever hear of a game was on TV. The video game companies would sandwich the ads between Saturday morning cartoons or in the afternoon after school. I remember getting all pumped up when I'd see what I thought would be a great game's commercial. We'd talk about it at school the next day. It didn't always mean the game would be any good, but it still got us talking, which is the only reason why a well-placed ad is really made in the first place. Well, that and get you to beg and pester your parents to buy you one. Most of these will take place during the decade of the 90s because like I said, everything after that has been dominated by online promotion and I was just too young in the 80s. These are in no particular sequential order or rank. Okay, I won't waste any more time talking, I know you came here to watch some videos.

Gears of War has become the a linchpin franchise for the Xbox 360 system, and it may have to thanks this commercial for giving it the first boost. The song itself is nothing new, Mad World has been around for quite a while, but it never received as much attention as when it was added to this eerie ad about the main character, Marcus Fenix. I remember seeing this for the first time on some weekend afternoon during a football game and actually jumping slightly when i saw the monster at the end about to attack.

Video games before this were usually just marketed for the fun of it, to get kids to buy them. But this is the first one I remember that made a game look like a full story. This is more of a movie trailer than it is a video game commercial. It's lost on me because I don't play a lot of first or third-person shooters, but I knew quite a few people that ended up buying the Xbox 360 solely on the anticipation of this game.

This is the first time I remember a game ad talking to me, basically demanding that I buy their product. It was also the first time I recall hearing about a game console having their games put on a compact disc. I know that it's beyond commonplace today, since it's now the only way to buy a physical copy of a current game.

The ad was great with its pop-rock music playing and a showcase of all the games, the system was not. When consumers found out the Sega CD was basically an add-on for the Sega Genesis even though it was marketed seemingly as a stand-alone console, it didn't do so well. It should have been it's own system. It was also marred by shoddy craftsmanship(it didn't really work too well). Not long after it's release the system was retired due to poor sales. Only a few dozen games were ever made for it. The Sega CD was the first shovelful of dirt in the digging of Sega's own grave as a console-making company. In retrospect, I'm glad my parents didn't let me have it.

The Legend Of Zelda

The original Adventures of Zelda came out before my time, well, not technically. This game hit the United States store shelves in 1985 on the Nintendo Entertainment System when I was 1. This ad showcases a terrifyingly bad rap song all about the game. It named all the weirdly-named creatures Link fights in order to save Zelda. It also shows that a video game can bring an overly-nerdy, white suburban kid together with a hip and cool, white suburban kid. Oh the wonders of mid-80s technology, anything is possible!

I caught this commercial much later on searching around on YouTube early in the new millennium. In the video game world, it's become a cult classic because of one thing...the rapping. Or should I say the lack of skill in said rapping. For it's time, it's still a great video game commercial and was the first time most of the gaming community had ever feasted our eyes on the second most famous Nintendo property out there. 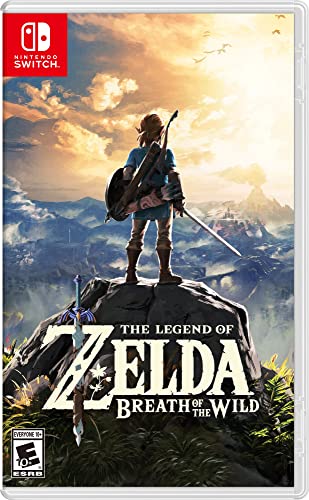 The Legend of Zelda: Breath of the Wild - Nintendo Switch
Buy Now

The creepy, crying baby commercial. That's all I've ever know it as. The Playstation 3 decided on this campaign to sell their new next generation console. It's obvious they went with a slightly different strategy here then most. Other than showing too much of the games themselves, they decided to scare the living hell out of any child watching instead. "It's thinking." is the tagline here. I suppose they mean the system is thinking, but all I can think about is the backwards-crying/laughing baby.

I don't know how many more Playstation 3's they sold, if any, because of this ad campaign. I'm sure it was supposed to appeal to the older and hipper, maybe even adult gamers that were and still are increasingly taking over the gaming marketplace. Did it make me buy one? No. Did it make me think and talk about the commercial? Yes. So i guess the advertising executives got at least some of what they were asking for.

It took me a while to find this commercial because for some reason all I could remember about it was a man eating, saying "No More," and exploding. I didn't have a Super Nintendo, so that's probably the reason too. I thought it was about a Kirby game...must have been the fat guy resembling the flying glutton himself, Kirby. The 9-year-old me just thought it was cool because the guy's stomach blew up and left the inner goo all over the wall.

The main ploy here is gross-out humor. I believe it's a response to all the extreme marketing campaigns by Nintendo's main competition at the time, Sega and their gaming mascot, Sonic the Hedgehog. They were beginning to lose some ground to Sega, so why not play fire with fire a bit. Again, it was a success because all the ads were ever supposed to do is get kids to stop and pay attention to what they're showing you. I still think it's funny to watch today.

Sonic The Hedgehog On Sega Genesis

As I just mentioned, this was Sega's answer to Mario. Sonic the Hedgehog was everything Mario wasn't. He was a super-fast, generation X, in your face kind of hedgehog. All Sega's commercials after Sonic came out would scream "SEGA!" and usually try to deface Nintendo in some way. I wasn't a bigger fan of either mascot. I liked both and still do.

This first ad campaign for Sonic was, what I thought, kind of a rip-off of The Church Lady skit starring Dana Carvey on Saturday Night Live. The over sensitive old lady that likes cutesy Mario and Nintendo only...and Sonic literally passing her right by. Symbolism anyone? More like irony for Sega. The company always made sure to let kids know that to be cool, you have to play our games. You'll really stick it to your parents and teachers. The Sega CD ad above follows a lot of the same guidelines.

The Nintendo 64/Playstation 1/Sega Saturn generation of video games was maybe my favorite ever. Then again, it's probably because I was a very early teenager at the time and that's when you're first old enough to really get together with friends and play/understand what you're doing. I had a Playstation 1 but always went to someone else's house to play this game along with Mario 64...and all the other great games the system had.

I first heard of this game was at the lunch table in middle school when a friend was looking at an issue of Nintendo Power Magazine. I thought it was "totally awesome" that it was a fighting game with all the characters from the Nintendo universe. It was even more than that. You could have up to 4 players duking it out. Now you could have all your childhood arguments about who would win in a battle between Zelda and Mario realized. It was a dream come true for kids everywhere.

This commercial was the first time I had seen that dream realized. Also, Mario is kind of a d*ck. I always knew he had it in for Yoshi.

The Sega Dreamcast was launched a short time before the Playstation 2 was and didn't last but a couple years before they stopped making it, but it did revolutionize one thing that we all have today: online gaming. It wasn't the absolute first system to introducing using a phone line to play against other people(actually far from it), but it was the first one with a built-in modem that could used right out of the box. With a paltry 28k modem, it was far from light speed, no lag, gaming, but someone had to be the guinea pig. Later on, Playstation 2 took the ball and ran with it, but Dreamcast was always the first.

When I saw this commercial about playing games online for the first time, I thought it was amazing. I imagined playing against people all across the world and having a ton of fun doing it. Now, almost all games out there support online play, with many games relying very heavily upon it for sales in general (Call of Duty, Madden). Let's not forget this was the first step on the way to Xbox Live and the Playstation Home, which both turn your console into not only a game system, but a fully-operational online multimedia experience.

Leave a comment below if you have anything to add or discuss. There are many more great video game ads out there. These are just the ones I personally like the most.