Every firefighter, man or woman has mixed feelings about going into a burning building. There is the part of us that is itching to kick the front door clear off it's hinges, attack the fire head on, than come storming out the back door carrying a family of four, two dogs, a cat and a fish named Bilbo. Afterwards we would ride that emotional high all the way back to the station. In the beginning we all feel like that at times. That side of us is huge, but after we get a few fires under our belt and we see what the belly of the beast really looks like that gung ho side starts getting smaller and smaller and the other side takes over. I like to call this other side the rational side. I discovered after several trips inside a burning structure my rational side was a bit wiser and less likely to get me killed.

The reality is going inside a building that is on fire or at one point was on fire is part of the job. We have to be prepared the best we can for when we are asked to enter the structure and perform any number of duties, be it search and rescue, fire suppression or overhaul once the fire is contained. Either way the time will come when we might be faced with the order to make entry.

There are several ways to make our trip inside a bit safer and a lot less likely to be the last trip we make. In this installment of Let's Talk Fire I want to focus on one of the cardinal rules of entry into a fire structure. One that is often overlooked in the heat of the moment and one that could cost us valuable lives.

The written rule of bring a tool

A plumber never goes into a situation without his trusted pipe wrench, seldom do you see a carpenter without his faithful hammer, and you certainly can't imagine a surgeon without a scalpel at his side. We as fire fighters should be no different in our work. No fire fighter should ever attempt entry into a fire ground structure without having a tool at their disposal. That simple tool could be the difference between a firefighter BBQ and a close call!

Tools provide us with a means of entry, escape and can even assist us in our endeavor to rescue anyone trapped within a burning structure. Each tool brings to the game it's own unique use and application as well as it's own limitations. Some fire fighters fail to see the importance of the tool and how valuable it can be when disaster strikes and we find ourselves in a situation that is anything but appealing.

Every fire fighter has to decide what tool is best for them. You need to look at the pros and cons the tool brings to the table. Most seasoned vets have a favorite tool that they use more often than any other tool. I will use myself as an example.

If I am ordered to make entry into a structure still involved I will always grab my halligan bar. I will enter with my halligan in one hand an attached to my turn out gear I keep a framing hammer, known in the industry as a FUBAR. These give me the means to easily get into the structure and if I have to find an alternative way out I have it right there in my hands.

If I am on overhaul duty I will trade the halligan in for a 3 or 5 foot pike pole. But I will still have the framing hammer at my disposal. In the following text we are going to explore three traditional fire tools and look at attributes that make them idea for certain tasks and less idea for others. 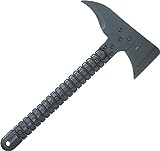 The axe is a standing symbol of the fire service. It is often considered the definitive fire ground tool, and rightfully so. Contrary to what some people believe the fire axe is not a sharp tool of destruction. In fact the blade is not sharp at all. Fire ground axes are not cutting tools. They are used to bust more than cut. The reason for this is we don't want to lose valuable time freeing our axe from a wall or door after it has become stuck.

The axe is usually the most popular tool for fire ground operations, especially to the older guys on a department who favor traditional means of work. An axe can be used to sound floors, checking for support beams, weak floor sections and fire spread. This can be done by using the head of the axe as a hammer. When you hold the axe just under the blade and allow the handle to be extended you add several feet of reach to your search and rescue capability. This is idea for checking under beds and other furniture that might be present within a structure.

Of course the axe is an exit making machine. It can easily take out a window or bring a door down. Very few things can withstand the power of the axe. I have seen an axe easily take out a wall to make entry into a secluded room of a house.

The axe has it's perks but with those perks also comes some downsides. In a tight spot it becomes very difficult to get a good swing with the axe, in fact sometimes it will be impossible. The real power comes from being able to get a good swing and if that is taken away than the axe loses a great deal of it's potential. You also want to make sure any other fire fighters are out of swinging distance. Imagine the damage an axe can do to a door imposed on the human body. It could be disastrous.

The axe is not an overly heavy tool so that is a plus. It is also a tool given to evelution. Some fire fighters did not want to carry a bulky full size axe so they opted for hatchets. From the hatchet tools such as truckmen axes, and pry axes have evolved making fire operations a little bit easier. While these tools are great they still lack the shear breaking power of the traditional fire axe.

My trusted black halligan bar has earned the nickname of "hooligan's bar". If I have it in my hand it's a sure bet I am about to take something apart, and do it in a hurry. The halligan has become a mainstay for interior fire operations. I like to call it the swiss army knife of the fire service. It offers a great deal of versatility and use to a fire fighter who has trained with it.

It can be used to check the integrity of floors much like the fire axe. The halligan also adds several feet to your reach during the search and rescue phase of operations. This makes the halligan an equal tool alongside of the axe. The real thing that separates the halligan from the axe is it's ability to make entry and egress points. The bar features a prying fork on one end and on the other a mattock style head and a pick head. It doesn't take a lot of force to put the halligan bar through most wall material, even masonry is no match for a well positioned halligan swing.

I have seen the halligan used to pry doors, and even seen it used as a battering ram, easily dispatching a locked door so a hose crew could knock out the flames inside. This attribute also holds well inside a structure. It is idea for getting into rooms that are locked or have had something fall and barricade entry. The tool is very versatile in making new entry points simply because it gives you a world of options with it's different parts. Some people even attach an axe with the bar to create what we call a set of irons.

There are drawbacks to the halligan bar. It is much heavier than the axe and that makes it difficult for a weaker fire fighter to make good use of. The tool is also all metal so in extreme heat situations you are going to be dealing with it absorbing some of the heat in the room making it very uncomfortable to work with. If you can carry it and use it well it is one of the best tools to have.

The pike pole comes in various lengths from 3 feet all the way to 12 feet. Interior work is best done with 3 to 5 feet. The longer poles will make interior work nearly impossible. You can use a pike to sound floors and it will give you an amazing extension to your reach for search and rescue. Sadly that is about the best it can do as far as interior operations during the fire are concerned. A pike is not a very resourceful tool for making entry or egress from a structure.

The idea application for the pike is overhaul. It can be used to drag flaming and smoldering objects outside to be dowsed with water. It is also great for removing sheetrock in ceilings and walls to check for fire extension.

When choosing a tool look at every possible application it can offer you. Don't just look at the limitations of the tool but also the limitations of the user. If you get winded easy a halligan bar is not the tool for you. If you are a great worker with an axe, than that should be what you use. Look at how the tool will help or hinder your fire ground duties. Always remember, never go in without a tool in your hand.