Effects of Stress in People with Mental Illness

While genetics and chemical imbalance are primarily thought to be to blame for mental health problems, you can bet your bottom dollar that stress will have played a part for most of the diagnosed mental illnesses. The most common mental health problems are those rooted in depression or anxiety. Caused by stress or a stressor, the result is mental distress and if severe enough, a diagnosed mental illness often results. Even if in the unlikely event, stress did not play a big part in the cause of any mental disorder, it is common for stress levels to rise after diagnosis. Living with your diagnosis can be stressful in itself.

Life is full of twists and turns, ups and downs. From coping with a difficult childhood or the worry of exams to the pressures of work, parenting or physical illness, we all have stressful times. When that stress builds up and over time we all have a breaking point. It isn’t personal weakness that breaks us. It isn’t a conscious decision to break down and appear out of control when we are diagnosed with disorders such as depression, social anxiety disorder, post-traumatic stress disorder, panic disorder or generalized anxiety disorder.

These disorders seem to creep up on us and we feel we can do nothing to change what we have become after diagnosis. For many, stress provoked anxiety disorders can lead to a myriad of mental health labels and it may well feel that you have sunk to an all-time low and may never even be the same again. Depression is commonly related to chronic stress levels or as a reaction to severe stress. What care and treatment can you expect within the psychiatric system when you have a stress induced disorder that is centred on anxiety and/or depression?

For a very long time, it was perceived as typically female to become stressed and anxious, perhaps a picture almost of emotional fragility. Words such as hysteria, hysterical, neurosis or neurotic added more than a hint of insult. Even today, and though many men suffer anxiety disorders often caused by stress, there is still some discrimination towards women. There is no concrete proof that women are biologically more emotional than men though scientists are always trying to prove this.

The fact is that for as long as we can remember, women have been seen as the weaker sex in the emotional stakes, but it does make one wonder how many more men suffer with emotional problems and stress related disorders than we think. Men are probably much less likely to share their anxieties. On the whole women are ‘talkers’ and men tend to keep things close to their chests for fear of looking weak. That said, in my experience over the last thirty years, I have seen an increasing number of males being diagnosed with stress related disorders.

Whether male, female, young or old, being diagnosed with a mental illness is often not easy to accept. Many years ago depression and anxiety disorders (formerly often known as neurosis, hysteria etc.), would have seen you admitted to an asylum. Even though your emotional state may have had a perfectly good explanation and been an obvious stress reaction to a life event, the symptoms would have seen you locked up for your own good and the good of others!

Towards the end of asylum days and before the 1980’s the words most likely used to describe someone with an anxiety disorder would have been ‘stressed’ or nervous as in ‘nervous fatigue or exhaustion’. Today, anxiety disorders and levels/types of depression are classified meticulously by the American Psychiatric Association in the DSM (Diagnostic and Statistical Manual of Mental Disorders) for easy diagnostic labelling. 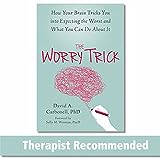 The Worry Trick: How Your Brain Tricks You into Expecting the Worst and What You Can Do About It
Buy Now

Over the years we have been led to believe that anxiety disorders and depression are forms of mental illness. When the way you feel, behave and think is affected to the extent that it interferes with your normal lifestyle, the oddly named ‘science’ of psychiatry believes you have a mental illness. It is a hugely debateable subject because there are no tests to back up a diagnosis but the vast majority of us appear to accept what we are told by ‘experts’.

So! You may be a worrier, or something may have made you react in an anxious way, but that doesn't mean you are mentally ill - you are more 'affected' by something than having a chemical imbalance.

The two main treatments for both depression and anxiety are medication and/or therapy. Quite a few years ago I was admitted to psychiatric hospitals with both depression and anxiety disorders. Anxiety disorders alone maintained my need for being a mental health service user, who spent many years being treated by psychiatrists with medication. In the days of my diagnosis it was always medication first and a very long wait for therapy if any was available! Therapy now in the UK is not nearly as good as it could or should be in my opinion. In this country our NHS psychiatric hospitals will rarely offer therapy whilst an in-patient for example. Therapies are based in the community, referrals are necessary and waiting lists can be long.

Years ago, I was told, as were so many others, that because of the way my anxiety and depression affected my life, I would find working difficult and claimed benefits to reflect this incapacity. It was the psychiatric service backed up by medicals, who assured me that my mental health problems defined me as ill, almost disabled…too ill to function normally! National schemes sprang up occasionally over the years to encourage sufferers like me to try to learn new skills, but if there is no consistent reliability on the part of a diagnosed mentally ill person, employers are loathe to take on long term mental health sufferers.

Today we have a changing picture of psychiatry and stress related disorders with psychiatry seemingly playing a less intense role in treatment. I am sure there are many reasons for this change but the main ones I can see are:

I would like to point out some of the pros and cons to this decrease in psychiatric involvement:

News on lack of treatment for depression and anxiety problems

I can only speak for the UK and from what I have observed in the last couple of years, but it almost seems like stress related illnesses such as anxiety and depression are being phased out of mental health care very slowly. Mental illnesses looked upon as severe, such as schizophrenia, schizoaffective disorder and psychosis are being given priority for care both as an inpatient and outpatient. I know of many long term anxiety sufferers who rely heavily on medications, and have worsened over the years, now feel a degree of being left to fend for themselves having had regular support from psychiatric services. Many have lost psychiatric community home visits and felt this was their lifeline in maintaining some stability.

For newly diagnosed patients I feel some of these changes may work in their favour but for those who have been mental health service users for decades, it may seem shocking. To be convinced by experts that you are unwell enough to need all of the support and then to suddenly have that support withdrawn is extremely stressful in itself!

If you have an anxiety disorder, do you believe the treatment should be -