Two Sides to a Story

Brandi. She paints, writes, she struggles with mental illness, loves everyone, but Most importantly, loves and worships God.

What you need to know...

There are a lot of negative stigmas surrounding Bipolar Disorder and Mental Illness in general. These stigmas do more harm than good. As a person living with Bipolar 1 Disorder, I want those who have loved ones struggling with this illness to understand a few things. This basic understanding can make a world of difference, not only for the one suffering, but also for the relationship you have with them. #1. There is no cure for the disease, we know this and it frustrates things for us. Prescription medications do not cure them, it only supresses them. Sometimes, depending on the person, it can even intensify symptoms so it is important to speak up to your/their doctor if this happens. If ignored, it could be a catastrophic situation. #2. It is absolute torture to live with mental illness. So, please, take it easy on us/them. The only way to stop your thoughts is to turn them off, at least that is what some who suffer with it feel. Thus, why some , sadly, commit suicide. Do not do it! Reach out. If you see someone struggling, reach out to someone yourself and ask them what you should do. I have included some ways to do that here in this article. Thirdly, To those who have a loved one struggling with Bipolar, it is okay that you may not understand us, we just need constant and consistent love and affirmation. If everyone did this, it would change the world. Either way, Feel free to share your thoughts and/or experiences in the comments below.

Sometimes I get frustrated because I want to slow my thoughts down so I can capture and process them before I forget them, It's like my body is trying to hurry up and slow down at the same time.

Sidebar: Something I do

When this happens, I look for things to channel my energy into that are expressive, bright, and creative. It clears my mind and lifts my spirits. I was struggling very bad with my Bipolar Disorder I and just started browsing on amazon for ways to cope with mental illness when I came across this book. It is called "the Black Chapter of Rainbows. It's the funniest, coolest book about beating depression. I wrote it for you." By Buddy Valetine. He had me at "I wrote it for you". I looked at it and then I googled it. The first thing I noticed, inside, was the brightness of it. So it immediately attracted me. I love bright colors. I got excited and told someone else about it. They got it for me as a gift. Inside there is so much more than colors. It has so many ways to soothe your mind when your feeling down. It has great tips and tricks to pulling yourself up out of a dark place. I was so glad they gave me this priceless gift. I love it more than I thought I would and it has made a huge difference in my life. I highly recommend it!

The Black Chapter of Rainbows: the funniest, coolest book about beating depression. I wrote it for you. By Buddy Valentine

Nearly 10 million (or 1 in 25) people suffer from Bipolar Disorder in America.

The term Bipolar means two poles. This is represented by the two major symptoms of Bipolar Disorder, Mania and Depression.

What is Bipolar Disorder I and II?

For some who may not know anyone suffering with this disease or do not know much about it, Bipolar Disorder is said by scientists to be a neurological disorder in the brain that causes unusual shifts in everything from your mood to your basic living activities. There are four main types of Bipolar Disorder. I have shown each one below as well as some symptoms and signs of Bipolar Disorder.

When and how was Bipolar Disorder discovered? I am glad you asked.

There are some good qualities of Bipolar Disorder!

"Bipolar should not always be viewed as negative. The way I see it, it is compensation. When someone is extremely smart, creative, or talented, it disrupts the balance in the brain. So, the brain must do something to restore the balance. ADD, Bipolar, Depression, etc."

To those who have Bipolar Disorder

Do you find art and music therapeutic?

To those who don't have Bipolar

Do you find art and music therapeutic?

The exact cause of bipolar disorder is unknown, but several factors that people with this mental illness may possess include biological differences and genetics.

As a woman who was diagnosed with Bipolar Disorder in 1995, at the age of 13, I barely remember life without it. One of the best analogies that I think would best describe Bipolar is a demon possession. I am not suggesting that it is a possession, but it does in many ways have similarities. Let me explain. Often times, if I am depressed, I cannot even force myself to get out of bed. I can only describe it as some form of temporary paralysis. Other times, I say or do things that are completely out of my character and control, have very little, if any, appetite. It seems as if there was a something inside my body acting and speaking for me, like the hit movie The Exorcist, just way less intense.

There are a lot of stigmas surrounding Bipolar Disorder. Let's see if they are accurate. I am going to post a statement about Bipolar and then answer if it is true or false with explanation.

"People who claim to have bipolar are just lazy." FALSE: Not even close to true. People who are diagnosed with Bipolar would literally almost kill to have the strength and energy to function on a daily basis.

"Medication will fix bipolar." FALSE: Treatment for bipolar does not "fix" or cure it. It only supresses it. If one builds an immunity to the drug they were prescribed for bipolar, the symptoms could intensify, sometimes even leading to suicide.

"Bipolar Disorder is the same for everyone who has it." FALSE: As discussed, there are different types of Bipolar and each individual has a different genetic makeup making each case unique to that person.

Straight From the Horses Mouth

I wanted to get a Bipolar Disorder persons definition of Bipolar Disorder. What better way to try to help others understand than to see through the eyes of the beholder? So, I posted a discussion question in a Bipolar Support Group forum. Below is the question I asked and the responses I received. Since I too, have Bipolar Disorder, I have included my definition below as well.

Question: If you had to give your own personal definition of bipolar disorder using only 2-3 Sentences, how would you define it, honestly and in your own words?

Jo'Ann Kelly Newton replied: "To me Bipolar Disorder is a roller coaster of emotions. People without the Disorder’s emotions go up and down but stay in borderlines. But people with Biopolar Disorder have a chemical imbalance that erases those borderlines. Medication and therapy can however bring the disorder into balance."

Lauramarie Angel agreed saying: "Rollercoaster. That is what I was thinking too..."

Brandi Woods stated: "To me, the best way I can describe Bipolar is like a demonic possession of my body. The reason I say that is because when I am depressed, I go through what I call a form of paralysis where I literally sit and argue with myself and tell myself to get up but no matter how hard I try, I cannot. Another reason I feel this way is because when I am having an outburst or episode of mood swings or anger, I often say and do irrational things that I cannot explain as if someone/thing else is controlling my body. At these times, I feel like I am not myself."

How about another Art Break?

Why is Awareness, Research, and Treatment so important so you ask?

People who suffer from mental illness are committing suicide at an alarming rate. Hopefully, by spreading awareness, we can start to save lives. Awareness is so important because many people who do not have Bipolar or does not have any knowledge or exposure to this disease, do not understand it. More importantly, since they do not understand it, they do not know how how serious it is, how to cope with it, or how important it is to get treatment. This information can be conveyed through spreading awareness. Maybe, if people understood the disease a little more, we would have less suicides due to Bipolar Disorder and Mental Health all together.

Research is still being done all over the world to find a cure and what causes mental illness. One can only hope that these studies will pay off in the very near future and save millions of people who are suffering both vocally and in silence.

Treatments for Bipolar Disorder include many different options as far as therapy and medications. There are also support groups that you can attend. As a patient, talking to other people who truly understand what I am going through, helps me and does make me feel a little better. There is also a vast majority of antipsychotic and antidepressent medications used to treat bipolar. Talk to your doctor to find out which one is best for you. It has been suggested since the discovery of Bipolar that Music, Dance, Art, Poetry and other creative stimulants, help with coping and I have found painting to be a quite peaceful and freeing type of therapy.

Bipolar is the sixth Leading cause of Disability in the world!

According to NAMI, or National Alliance on Mental Illness:

Did you learn anything from this article?

Thank You for Reading My Article

I really put a lot of work into this article so if you are reading this, it means you took your time to read it and that means the world to me. Feel free to leave any comments or feedback in the comment section below. If you would like to support this cause, please share my article so that we can spread awareness. 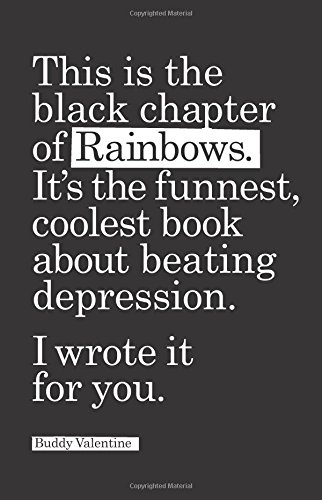 Rainbows, the coolest book about beating depression
Someone gave me this book as a gift. I am so glad they did! It is very therapeutic, packed with bright colors, for when your feeling blue, and great ideas on how to cope with depression. I love that it is has a sort of feng shui to it. When I am feeling down, being creative and colorful really helps me. There are different ideas for different colors. Guaranteed to lift your spirits if you are feeling down. They also have really cool downloads that I liked. It comes with a food diary download, a mood manager download, a sleep diary and so much more. A must have if you suffer from mental illness.
Buy Now

You are beautiful, intelligent, funny, special, normal and loved. Until next time......... - Brandi Woods