How Do Christians Handle Domestic Violence?

That is the chapter title of CHAPTER ONE of Woman Submit! Thinking of physical abuse between spouses in the Christian church is eye opening. Non-believers may point fingers, laugh, or shake their heads at the "liars and hypocrites', but their actions do not change the fact that abuse occurs in the Church as well as outside of its congregations. And yes, it is sometimes perpetrated by false Christians that proclaimed their faith in order to lure in a potential spouse. 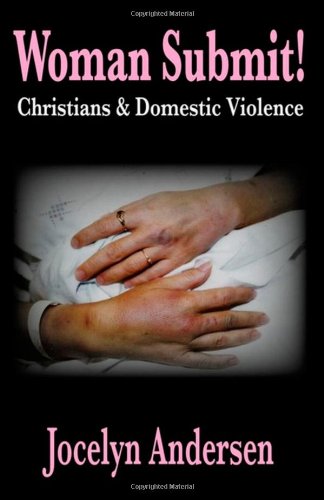 Woman Submit! Christians & Domestic Violence
How to avoid submitting to violence and how to find help.
Buy Now

4 out of 5 stars from 1 rating of Woman Submit!

This is the testimony of one female church member that was brutalized by long-term physical abuse from her husband.It is incredible and unimaginable, but it occurred.

One such beating left her paralyzed, lying helpless on their bedroom floor. She bled from her eyes and ears, suffered a likely concussion and certain skull fractures. One arm and hand were left limp and useless. She went into shock and lay on the floor, unable to move or to reach the telephone, which was likely turned off by her spouse.

Because the abuser sensed upcoming legal retribution in the future, he boidly picked her up, placed her on the bed, and refused to allow her medical help or a phone call. In fact, he removed all the telephones from the home and left her to lie on the bed along for 32 hours.

Some are addicted to trying to make the abuser happy -- Like the addicted gambler's creed: "Just one more chance and I'll win!"

Abuse of Men, Women, and Children is Real

During her injuries and the first night in pain, this woman prayed.

Her husband came home and replaced the phone, only after she promised not to call the police. He left again and she did call for help, but not the police. She called her pastor, who had previously showed impatience or disgust with her complaining, but now rushed to her rescue.

At the ER, physicians surprisingly reported that Jocelyn Anderson suffered no fractures or internal injuries from her beating. She attributed this miracle to prayer, giving as evidence a supernatural peace she felt following her beating.

Targets of all sorts of abuse are bound to their abusers by emotion, tradition, lack of outside help, and incorrect religious beliefs.

Some are addicted to trying to make the abuser happy - like the addicted gambler's creed: "Just one more chance and I'll win!"

As a counselor and educator, I learned of the varieties of abuse only since the 1990s when people began to talk about them in public. This abse is a crime and a perversion. I have known men, women, children, and pets that have died from abuse. It is murder. Rules and regulations apply in the workplace, in school, etc., but not abusively. Abuse is inhuman. The rules "in the Bible" for marriage and submission are mistranslated from the Hebrew in the KJV, because of changes in the English language itself , as discussed below.

Ms. Anderson traces abuse back to Adam and Eve. This is provocative and makes one think. She contends that Adam turned his anger on Eve because she was first to succumb to the serpent and it was "all her fault", as abusers often state today, discussed in "Chapter 4: The Eve Syndrome." The fifth chapter is "Church Sanctioned Oppression", describing how churches have told wives to stay with abusive husbands and change these men with a wife's good Christian example. Unfortunately, this does not work and many of these wives (or abused husbands) are dead. Perhaps the worst myth of all is that abused individuals ask for the abuse.

In related research, Frank T. Seekins shows that Jaweh is in the middle of Hebrew words for "man/husband" and "woman/wife" when the words are combined side by side. They are unified by God and God is in them. If you remove His Name, then all you have left are two of the same symbol that means two things: 1) fire (destructive type) and 2) strong teeth. Thus, after the fall from grace in Eden, God was separated from Adam and Eve. This left the major interaction between the father and mother of mankind to be strife. In this light, Anderson's proposition makes full sense.

There is also a language problem. Hebrew has retained its meanings for millennia, while English has changed. Thus, different meanings have been given to the original Hebrew. This helps to enable abuse. The word helpmeet/helpmate has been wrongly translated since King James, because the English language changed at that point. The Hebrew helpmeet means defender of the man. The "help" is the identical help coming from the Lord - mountain-moving power, splitting the Red Sea power, calming the tempest, healing disease. It does not denote a submissive servant over whom a man should dominate.

Turning the other cheek means to shame the attacker by his own actions, not to invite more punishment.

Turning the Other Cheek Brings Shame to the Striker

Sometimes the church tells victims to turn the other cheek; however, this does not mean take more punishment. ** In the culture where this phenomenon was written in scripture, turning the other cheek meant that the next strike would be backhanded and this act was officially cowardice, causing the attacker to lose face and be shamed.

Turning the other cheek means to shame the attacker by his own actions, not to invite more punishment. ** It does not mean to set a submissive "Christian" example and accept abuse.

The church need not enable abuse and Ms. Anderson's book shows how individuals and the church can help stop this perversion. She includes many interesting and vital aspects of the phenomenon and its more effective handling, with her own personal testimony at the end of the book.

Reading Woman Submit! can help save someone's life - maybe yours.

HUNGRY HEART MINISTRIES - A ministry to Stop Abuse and help its targets.