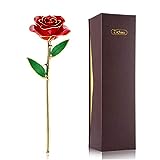 I am lucky to say that I've received a number of memorable Valentine's Day gifts over the years. Looking back, what I realize is that none of the gifts was particularly valuable in the monetary sense. And none of them would probably stand out as superb if described succinctly to someone else. But each of them was perfect for me at the time that they were given to me. And I think that's what the perfect Valentine's Day gift is all about; someone else understanding exactly what you need and giving it to you at the right time.

Here are just some of the Valentine's gifts that I've gotten over the years and the reasons that they were so perfect for me at the time: