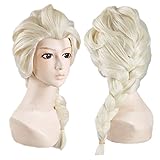 For quite some time anime has been a burgeoning art form, characterized by the large eyes of the characters, as well as the loud clothes and colorful, large hair.

That has translated well to pop culture, providing a plethora of costume ideas for those interested in cosplay, or maybe wanting to differentiate themselves at a Halloween or other costume party.

Of course many of the anime costumes the general public see are at special comic-con events around the world, which attract a lot of media attention and coverage.

It's no longer possible to identify many of the popular anime characters, as the number of comic books drawn upon for inspiration and media outlets that now embrace them seem to be endless.

What largely remains is the overall anime look, which while making creative changes over the years, still includes a unique image; although it's getting harder and harder to distinguish between anime and other art forms because of the way it has changed over the years.

It's no longer just the big-eyed characters with out of proportion bodies that we see in the art form any longer.

Be aware that anime is what the name sounds like: animation. So when you talk anime costumes, it's based upon animated characters, even it they are inspired by illustrated manga comics, or other sources.

Having said that, for those that want to display anime costumes that are based upon the traditional look, using wigs and/or loud hair colors is a must.

These could include, beyond natural hair color, hues that are pink, blond, orange, blue, red or green. Hair in anime can be all lengths, and also include a variety of styles. It now incorporates so many other influences that it's hard to easily identify anime any longer.

Many people will identify anime as almost anything they see at a "Con" event.

Some adherents will include anime makeup which is placed above the eyes in the form of large eyes still associated with anime. People doing that will actually close their eyes to show the large eyes designed on their lids and up into the forehead.

Because anime orginated in Japan, there continues to be a strong influence on costumes and the illustrative art it draws from in many ways.

With anime costumes, you'll see a ninja influence, Lolita, and comic book characters inspired by the illustrations seen in manga.

As far as anime styles easiest to identify, usually it's costumes worn by women that continue to be closest to the style. The exception with men is the ninja look and long trench coats that have a apparent Gothic influence, although anime trench coats usually don't have the dark trench coat look associated with many male Goths.

This first costume inspired from an anime look gives a glimpse into the general feel of the art form, which includes the vibrant colors associated with the theme, as well as the sense of a lot of hair on the head.

Some people use pointy ears like the ones above to reproduce some of the familiar attributes of the genre.

But as for a costume, you can see why anime is such fun source material to build costumes around.

The vinyl trench coat look below is one fans of Final Fantasy will recognize, as it's based upon the character Vii Cloud Strife. You can find this compelling costume style in other colors as well.

Below that is another trench coat costume below that with a more modern military look as far as having an appearance of camouflage to it..

Next we have a gorgeous anime-inspired latex costume that looks beautiful. The latex and vibrant red color makes it an eyecatching costume which will ensure anyone wearing it that they will attract a lot of attention.

The puffy sleaves and additional designs elements are a nice touch to the costume.

Next there are several videos showing how to put together a variety of elements related to anime costumes. In the last video there are a good number of images showing how people dressed up based upon the popular Naruto series.

After going through the photos and videos there should a a lot of ideas to for everyone to get some anime costume inspiration from.

How To Dress As A Cool Ninja For Halloween

The Jetsons Halloween and Cosplay Costumes

In the following gallery of anime costumes for men below it shows how things have changed through the years to incorporate a number of influences in the anime look.

For example, you can see some punk there, anime from long ago, and steam punk as well. You also get a dystopian feel from the overall group. Pretty cool bunch of costumes.

In the following anime photo gallery there are a plethora of costumes worn by women which are inspired by anime.

Look at the disparity of design, colors, accessories and hair styles. No wonder this is such a popular theme for the ladies to us as costume inspiration. All of them look great, and there is almost an endless number of ways to design an anime costume that is fantastic and fun.

Like the men, the women also have a variety of other cultural influences on the overall look of their anime costumes.

The large variety of compelling and wonderfully designed costumes based on anime subject matter show how amazing the influence of the art form has been on popular culture, and how it has grown to incorporate many other influences to expand upon the original look of large eyes and out of proportion bodies it originally portrayed.

All of that means there are fewer constrictions on anime costumes, and almost anyone can take some inspiration and create in the likeness they choose.

But whether men or women, adding some ancillary accessories takes it to another level which delights those viewing the costumes as well as those wearing them.

In the end, anime is just a lot of fun, and that's why so many people partake in it as a costume choice.