Lantern In My Patio

This is the final part of my article “English Words From Things Chinese”. For Part 1, please click HERE to read. Now let’s continue from where we left. Here we go.

F is for fortune cookies. This is a favorite for the Caucasians. Actually, I think fortune cookies were introduced by Chinese restaurants in the West. I don’t think there is such a thing as fortune cookie in China. So it must be the invention of the enterprising Chinese businessmen to hoodwink the foreigners. ( LOL!)

G is for ginseng, the scientifically unproven miracle panacea of the Chinese. Now it’s time for the foreigners to make even with the Chinese. The biggest suppliers of ginseng is not China, but the U. S. A. and Canada!

G is for gunpowder. The Chinese invented gunpowder which they used for fireworks; never intended for killing people.

H is for heritage and history. China has a very long and continuous unbroken recorded history of more than 4000 years. This made many parts of China to be heritage sites. In fact, China itself is a heritage. It is a popular saying that wherever you step on in China, you are stepping on history.

J is for junk. The Chinese junks which Admiral Zheng He sailed the seven seas were huge ships easily dwarfed the sailing boats used by Christopher Columbus. So the real Chinese junk is not a junk simply to be discarded.

J is also for joss-sticks and joss-papers. Praying with joss-sticks and burning joss-papers are very ancient Chinese religious rituals, which are still practised today. By the way, the word "joss" means "a Chinese idol or deity".

K is for kowtow, meaning bowing. This is the traditional Chinese greeting especially showing respect to someone older or someone in authority.

K is of course for kungfu. This needs no introduction or explanation.

L is for lion dance. The lion dance is famous and well-known throughout the world.

L is definitely for the historical long march. In October 1934, Chairman Mao led his army on the historic journey to the northwest of China to escape the onslaught of the Kuomintang army. The long march traversed 12,500 km (8,000 miles) over the highest and harshest of Chinese terrain. Mao started with 100,000 soldiers and by the end of the journey after 370 days, only 7,000 survived. The long march and the Chinese great wall are two main hallmarks of Chinese persistent resilience.

L is for lunar new year, which is usually referred to as Chinese New Year. It usually falls on the new moon of February. Nearing the lunar new year, you will witness the largest mass commuting in the world when millions of Chinese workers prepare to return to their hometowns and villages to celebrate with family members. The Chinese Lunar New Year is the most important festival for all the Chinese throughout the world. The festivity is celebrated for 15 days.

L is for lychee. You can consider the lychee as a twin member of longan. Both are about the same size and round in shape, and taste-wise, it can be said, one is an extension of the other.

M is for magician. Move over, David Copperfield. Introducing the boyish and elusive Taiwanese magician, Liu Qian (or spelt Lu Chen). Liu Qian also speaks English and Japanese, making him very marketable in the world of entertainment, especially in Asia. Every Chinese in Asia knows Liu Qian. Youtube has tons of Liu Qian’s performances. Youtube even has videos showing the secrets to how Liu Qian’s illusions were done. Let me share with you one of his illusions in the Youtube video below. Enjoy. 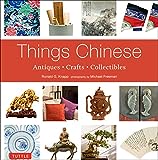 Legend Of The Monkey King

From Mid-Autumn Festival To Famous Musicians

M is for the legendary Monkey King. The Monkey King was the main legendary figure based on the ancient classic novel, “Journey To The West”. There are many adventures of the Monkey King which are most popular with children.

M is for musicians. Lang Lang is the famous Chinese pianist, while Yo-Yo Ma is a famous cellist. Watch and listen to their performances in the Youtube videos below.

Brass Urns In Front Of A Chinese Praying Alter

From Noodles To Zither

N is for noodles. No other product can beat the noodles to remind us of things Chinese.

O is for the terrible opium. Opium was brought into China by the Europeans to get them addicted. China did not require anything from the Europeans, but the Europeans thirst for many Chinese things especially tea. What a better way to inflict the third curse on the Chinese. Yes, the opium was the third of the three curses on the Chinese. The Chinese were so terribly addicted that they were condemned as the sick men of Asia.

P is for the adorable black and white pandas.

P is also used to describe another animal metaphorically, “paper tiger”. This term is literally translated from the Chinese. It simply means a false threat.

P is for Pekinese, the little lion-like pet dog.

P is also for Peking duck. “Peking duck” usually refers to the special red crispy roast duck that Peking is so famous for.

P is for ping pong, or table-tennis. It was most famous during President Nixon’s time. In 1972, President Nixon visited China, thus creating history for the U S. It took years of secret communications between the two nations, arranging visits of American ping pong players to China, which were eventually called the “ping pong” diplomacy. By the way, China has always been the undisputed champion of ping pong.

P is for printing. Printing was not invented by the Europeans. Long before the Europeans knew how to print, the Chinese had been doing it.

Q is for qi (chi). There is no equivalent term in English. That’s why the original Chinese term is used. Roughly speaking, qi is the unseen vital energy that flows through the body, just like the unseen electric current flowing through the electric wires. Without qi, one is dead.

Q is for queue, or pig-tail. Chinese men during the last Manchu dynasty (Ching dynasty) had to keep their pig-tails. By imperial edict, any man caught without the pig-tail would result with his body without a head, meaning, having his head chopped; beheaded!

R is for red packet. The red packet is a traditional gift in the form of a red packet containing money. During the Chinese lunar new year, red packets are always given to family members and relatives, usually by the seniors to the juniors.

R is also for rickshaw. There are many names for this mode of transport. Other names are pedicab, trishaw, and jinriksha. “Jinriksha” comprises three words, Jin, Rik, and Sha. Both in Japanese and Chinese, it lterally means “human”, “strength” and “carriage”.

R is running dog. This is the most despicable term in Chinese, describing a traitor.

S is for sampan, literally meaning “three planks”, which is a small boat built of three timber planks.

S is for shanghai. This is not about the town of Shanghai, but someone being tricked into going somewhere.

S is for sedan chair. Apart from the horse and carriage, the sedan chair was the only mode of transport in ancient China for the ladies and the high ranking officials.

S is for the controversial and much sort-after Chinese culinary delight; the shark fin. Shark fin soup is the most expensive soup in Chinese cuisine.

T is for taichi, one of the more popular and well-known Chinese art of physical exercise based on kungfu movements. Every morning in the parks, throughout China, millions of Chinese, especially the elderly residents, will go through the rhythmic movements of tai chi.

T is for taiko, meaning big brother, but more towards “godfather” of the underworld.

T is for tea, of course. This needs no further explanation.

T is for temple, usually associated with Chinese temple.

T is for tycoon, meaning, a very wealthy businessman with great power and influence. In Chinese it means great prince.

U is for urn. Urn in Chinese context is usually associated with the brass vase for placement of lighted joss-sticks. Take a look at the photo on the right showing two brass urns in front of a Chinese praying alter.

V is for vase. The Chinese vases are a special breed by themselves. I am referring to those priceless antique vases. You can see one of them in the photo on the right.

W is for wall. In this case the Great Wall of China. The Great Wall of China is the only man-made structure that can be seen from outer space. It stretches from east to west along the northern regions of China with a distance of 8,850 km (5,500 miles). The Great Wall was built over many centuries started by the first emperor of China around 220 BC and subsequently continued by later dynasties. The main purpose of the wall was to prevent foreign attacks from the north. It is one of the Seven Wonders of the World.

X is for Xi Jinping. Xi Jinping is the current (2013) President of China. You can read about him in my article HERE.

Y is for yinyang, the Chinese mystical symbol depicting the principle of the “harmony of the opposites”.

May The English Language Last For Ten Thousand Years