Barack Obama has statue to remind his childhood time in Indonesia. But the statue of the USA President become the subject of love and hate in Indonesia. For people who love him, especially moderate and secular people, Barack Obama is an inspiration. In other side, for few fanatical nationalism and Muslim organizations, they hate Obama, especially his childhood statue.

Some fundamentalist Muslims element demonstrated in purpose to protesting Obama’s visit to Indonesia. Obama delayed his visit in March 2010 and moved to June 2010, but June delayed either. Nevertheless, the delay is not because of hardliner organization protest. Most of Indonesia is expecting Obama visiting. Obama, please come to Indonesia!

Barack Obama becomes hot issue in Indonesia since he running his campaign for USA president candidate. Obama grabs worldwide public’s attention because he is an Afro-American candidate. Indonesian people are very proud especially because Obama ever lived with his mother and Indonesia stepfather from 1967 to 1971. From his stepfather, Lolo Soetoro, Obama got half-sister Maya Soetoro. In other words, Indonesia is “old haunting grounds” for Obama. For people who admire him, they create statue, books, novel, and movie about Obama childhood as an appreciation. 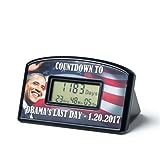 Barack Obama becomes America’s first black president is a great phenomenon in American history and world democracy discourses. This is not only the winning of Obama, but more for the plurality and democracy. Some of his ex-schoolmate and organization “Friend of Obama” in Indonesia would like to celebrate and gives inspiration to all people, especially for Indonesian children. They built bronze statue of President Barack Obama as teen year old boy.

The statue of Obama or more famous as “Little Barry” in Indonesia was designed by Leo Angelo and carved by Edy Chaniago. The almost life-size 43-inch statue depicts a 10-year-old Obama, wearing school-boy shorts with his outstretched hand and a butterfly perched on his finger. The statue erected in Menteng Park, Jakarta capital city of Indonesia, at 10 December 2009, the same time with acceptance of award U.S. President Barack Obama the Nobel Peace. The statue put in Menteng Park because near to his elementary school and neighborhood playground when the U.S. president was a kid.

Little Obama statue named "Barry Dreams Come True" stands at Menteng Park in central Jakarta, close to the school Barack Obama attended as a child. “Barry” is Obama childhood nickname when living in Indonesia. The organization Friends of Obama raised money to build the statue. “The statue is a symbol of hope for the children can dream. So no matter what he had done for Indonesia,” said Chairman Friends of Obama Ron Muller.

Obama statue drew a public backlash after it was given a prominent position in Menteng Park, Jakarta. The decision to move the statue comes after more than 57,000 people joined a page on social networking website Facebook calling for the statue to be removed. Because of Indonesia supporter was afraid, they removed the Obama Statue to a new place on 14 February 2010 and moved it to Menteng Primary School that Obama attended as a child.

“Workers hired by the school, local government and alumni spent an hour removing the statue with electric equipment,” said Solikhin vice-principal of Menteng primary school. “We’ll need another two to three days to place the statue at the compound near the school gate so the public can see it when they pass by,” he added.

Facebook member “Turunkan Patung Barack Obama di Taman Menteng” (Take down the Barack Obama Statue in Menteng Park) arguing that Obama has done nothing for Indonesia. There is no a significant contribution to Indonesia nation. There are many Indonesian heroes who did not have statues, it is better to build statue for our heroes. "For the dignity of a sovereign nation, Barack Obama's monument in Menteng Park must be removed immediately." the web page says.

The protest had calm down after statue moved to Menteng primary school. For the sake of Indonesian and American children, the statue is a symbol of friendship. The statue is an inspiration; encourage them to have a dream that everything is possible in their future. Let them have a dream to be a president. Do not let them hate others nations, but teach them a good nationalism.

Indonesia is home to the world’s largest Muslim population and many here believe Obama will improve relations of Indonesia with the West. President Barack Obama will visiting Indonesia and let we hope a new beginning of relation.

Do you ever know that Barack Obama is so famous in Indonesia? Two novel: Obama the Menteng Kid and Obama from Asisi, both fiction about Obama childhood in Jakarta, Indonesia, at 1967 - 1971. Indonesia also released movie Obama the Menteng Kid from the first novel. Is it really something interesting about it? Read and find more:

Let the children witnessed that there is a future and hope for them. Do not let them divided by narrow minded nationalism, fundamentalism, religion, and racism, but living in harmony of diversity, pluralism, and rejoice of friendships.

"A young Boy Named Barry Played with His Mother Ann in Menteng Area. He Grew Up to be the 44Th President of The United States and Nobel Peace Price Winner, Barack Obama".

Republic of Indonesia is an archipelago in Southeast Asia consisting of thousands islands, between Asia and Australia. Indonesia has the world's largest Muslim population where 85 percent of 230 million populations are Muslim; the remainder is mostly composed of Protestants, Roman Catholics, and Hindus. Ethnically it is highly diverse, with more than 300 local languages. The people range from rural hunter-gatherers to a modern urban elite.

Indonesia is democratic country, but some fundamentalist organizations tried to change it become Islamic state. Militant Islamic groups have show their forces and over the past few years. Terrorists international tried to destroy Indonesian as democratic state. Some of them have been accused of having links with Osama Bin Laden's al-Qaeda organization. Terrorist group blamed for various bombing in Indonesia such the 2002 Bali bombings which killed 202 people. Indonesia special force anti-terrorism have arrest some of their prominent leader, but terrorists keep trying to make Indonesia as unsafe country. Indonesia and America faced the same problem: international terrorist made both countries as their main bombing target.

There are many great place and natural areas to explore in Indonesia. Here some good place to visit and enjoy your vacation: