1st, after studying your Bible, I challenge anyone who believes that the anti-Christ will come from Europe to show me Biblical proof that the anti-Christ is to come out of that area (or the Old Roman Empire). That is conjecture that many Bible Prophecy teachers extracted from Daniel 9. The way they came up with this assumption was because Daniel mentions that the king to come will be of the people that destroy Jerusalem. They automatically assume it was Rome. But they fail to see the fact that the Roman Legions (VII, X, XII & XV) that destroyed Jerusalem and the Temple consisted of Turks and Syrians and Arabs. They say that the beast must have taken a head wound and then been revived. Well the Romans fell apart from the inside and later split into 2 heads (east and west) and they never sustained a head wound to the original empire. The Muslims defeated them in the east, but the west was never really defeated, they just fell apart from government and Outer territory Instability . The east actually lasted longer, but they were overtaken by the Ottoman Empire.

The Muslims (under the Ottoman Empire) took control of the Holy land for 1000+ years and did take a severe head wound when they were defeated in the early 1900’s during WWI for siding with Germany. They lost their empire and it was divided up between France and England under the Balfour declaration. Unfortunately, they are gaining back their foothold and are looking for a new leader to take over their religious and political interests. They are attempting to take over the world and instill Sha'ria law in many western countries. They have already gained a foothold in the English and French governments and are attempting to do the same in Canada and the US. They figure that the best way to win a Jihad is to steal away their government and then force strict Sha'ria law on its citizens. The more fundamental Muslims believe in war and terrorism. In reality all Muslims must bring Jihad against non-Muslims per the Koran because they believe that there can never be peace until the entire world is Muslim and they think that when their Mahdi comes he will bring war on the entire non-Muslim world. Their Mahdi will essentially be the leader they crown as the religious and political leader of Islam. He may very well be one and the same as the anti-Christ.

Some questions to consider: How come John, never once speaks about Rome as the beast? Was he not being exiled by Romans to Patmos? Why doesn’t Peter, Paul, Jude or James mention Rome as the beast? The beast is to have 7 heads and 10 horns. It is a common misconception. The EU already has more members than that and it is actually starting to fall apart as the Euro slides due to significant debt and a defaulting Greece. Go into it with an open mind. Don’t just take my word for it and don’t just take the words of Barnhouse or Van Impe, or Jeffries or Reagan or any other teacher. Look for yourself. Isaiah, Jeremiah, Ezekiel, Amos, Hosea, Micah, Malichai and Daniel never once mention Rome or countries that consist of Rome. They do, however, mention Turkey (who is immediately north of Israel), and Syria (Assyria), and Afghanistan, and Pakistan and Iran (Persia) and Iraq (Babylon) and Jordan (Moab, Edom & Ammon) and Lebanon (Philistia) and Egypt and Sudan and Somalia and Ethiopia (Cush) and Libya and North Africa (Put) and Saudi Arabia (Midian, Sheba, Dedan).

He mentions all of those countries as players in the end times, but never mentions Rome. I am pretty confident we can assume that the countries above, less Rome, are going to be somehow involved in the end times as enemies of Israel because they are specifically mentioned in Bible Prophecies as such. To deduce that Rome (EU) and America will be in this end times scenario is a miscalculation by western Euro-Americentric thinking. I think it is dangerous to assume that, because what if they are wrong? If the anti-Christ does come from the Revived Roman Empire, they are right and no sweat of their backs, but if they are wrong they can miss the boat entirely and be no different than the Pharisees of Jesus’ time.

They were looking for the Messiah's glorious return, but failed to see the peaceful, loving, suffering servant, even though it was specifically written in the Psalms, in Isaiah and in Zechariah. Many of these EU thinking teachers also believe that the Pope will be the false Prophet and that the Catholic religion is the Whore of Babylon. Is the Vatican anywhere near Babylon? No…the only religion near Babylon is Islam and the pagan roots of Islam go all the way back to ancient Babylon. Many people do not realize that the origins of the name Allah stem back to the paganism originally practiced of the tribal religion of Mohammed. Allah was their Moon God and he figured that the only way to get the Meccans to accept Islam was to introduce one their gods as “the god” with the Name Allah. He figured that they would gladly accept the moon god who was already of high esteem to them as the one god and that the others almost 400 gods were not really gods. That is why they always have the crescent moon as the symbol for Islam. That is the same god that the Jews used to sacrifice their children to in the fire. The same god as Baal that the Ammonites, Edomites and Moabites worshipped. Baal or Allah was a god of forces. That is why Daniel in the 11th chapter says that the anti-Christ will worship a god of forces and will not worship the gods of his forefathers.

Daniel also states that the people of the prince to come will not esteem women. Some take that to mean that he will be a homosexual, but when you dig deeper, you find that it means that women will be considered beneath men, of lower value than men. The Muslims treat women pretty poorly if you follow their culture. In Revelation we find that he will behead Christians. It wasn't a major practice of Catholics to behead Christians, not even during the inquisition. Even though the Catholics may have beheaded some people, it was usually non-Christians, or the rebellious, or people that introducing damnable heresies into the church, there may very well have been a few Christians in there, but it was not a well known practice and certainly doesn't happen today. However, it just so happens that beheading is still a common practice in the Muslim culture. They behead anyone who will not convert to Islam if they practice full Sha'ria law. If you review the qualifications of the anti-Christ, a European will not fit the bill although a Muslim will fit it to a T.

The Anti-Christ has to be of the people who destroyed the Temple and Jerusalem. (a Roman could be, but so could a Middle Eastern person as mentioned earlier). He will be called the Assyrian (a European could not be considered an Assyrian, but a Middle Eastern Person can). He will be against everything that Christians believe. Most Europeans have Christian backgrounds and I have a hard time believing that Americans and Europeans will gladly accept an Anti-Christ as their Supreme leader and accept the mass murder of Christians. However, during the "Great Tribulation", according to St. Paul in II Thessalonians, there will be so great a spiritual deception, that even the elect will be deceived, if that were possible (I believe there will be a Rapture and the elect will already be gone). So it will be very possible to deceive Americans and Europeans when the Christians have already been taken out of the way. The beheading will come to the believers that come to Christ after the Rapture of the Church. Remember, there are going to be 144,000 Jewish evangelists and the two supernatural witnesses that spread the Gospel like never before. I believe the Christians that will be beheaded will be the Jewish converts and many of the people they lead to Christ. It will be the greatest revival in history.

Again, I challenge anyone to provide Scriptural support to suggest that the anti-Christ will come out of Rome. Everything I have been finding does not support that.

The Bible is jam packed with such fabulous and incredible information and remains a book like no others. From its Wisdom, Guidance, Mystery, Prophecies, History, its Supernatural background, and it overall Design, the Bible is a book you can read everyday for the rest of your life and can never learn it all, but always learn something new. The Bible is God's Love letter to you and me. If you are an atheist or an agnostic, I present you with a challenge. God promised to reveal Himself to anyone who calls upon his name. Test Him at His Word. Find out more about Christianity below. Just like you would research anything else, research the Bible . Even if you do not believe, ask God to show you the Truth.

May the Lord bless you and keep you. May the Lord Shine His face upon you and give you peace.

Feel free to browse my online store for Bible Prophecy and other Christian Media resources @: The Christian Corner

Are You a Good Person?

The Truth - Christianity in a Nutshell

The Rapture - Part 5 of 6 The Final Chapter

Babylon The Great - The Whore and the Beast

The Creation Prophecy - What Does Genesis say about the End Times?

An Abomination in the Church

Mythical Creatures in the Bible

Creation - 6 Days or Billions of Years 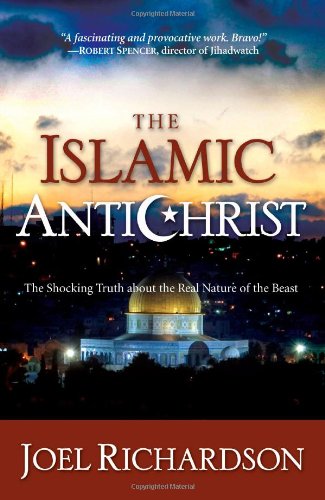 The Islamic Antichrist: The Shocking Truth about the Real Nature of the Beast
In The Islamic Antichrist, Joel Richardson breaks new ground with this devastating account of the possible connection between the Biblical Antichrist and the Islamic Mahdi. The Bible predicts that in the last day,s a charismatic leader will establish a global following in the name of peace. The Koran also predicts that a man will rise up to lead the nations, pledging to usher in an era of peace. The man in the Koran is called the Mahdi, or Islam's savior. However, the man in the Bible is the Antichrist. Could it be possible that this is the same person? Richardson's stunning research and analysis suggest that it is. In The Islamic Antichrist, he exposes Western readers to the traditions of Islam and predicts that the end times may not be that far away. His book will stun readers who are unaware of the similarities between the Antichrist and the 'Islamic Jesus.'
Buy Now