In this article we will look at the fourth of these seven letters written to the congregation at Thyatira (Chapter 2, verses 18-29).

We will begin with an overview, then the actual verses taken from the Book (with my commentary added), concluded by an historical summary about the city of Thyatira.

May you be edified by the stern words Jesus imparts to the congregation in Thyatira, "the idolatrous church".

The Letter to Thyatira

In this letter, Jesus takes all the symbols of judgment and issues a strong rebuke against those in the church who corrupt true religion and seduce others from the truth.

2:18-19 "And to the angel of the church in Thyatira write, 'These things says the Son of God, who has eyes like a flame of fire, and His feet like fine brass: I know your works, love, service, faith, and your patience; and as for your works, the last are more than the first.

This is the first and only time in Revelation that Jesus calls Himself the Son of God; His supreme title as Deity.

Seemingly, Jesus had purposed it especially for Thyatira because it is the only church given to idolatry. The disdain of which is clearly evidenced by the two strong symbols Jesus associates with His name. "Eyes like a flame of fire" and "feet like fine brass" both speak of judgment.

As always, our Lord Jesus first acknowledges the good works of the congregation. That they had grown, and were more impressive than works accomplished earlier, when the church was first established.

And herein is a lesson for us, considering the strong rebuke about to come. That works alone are not a guarantee that we are in a right relationship with Almighty God.

2:20 "Nevertheless I have a few things against you, because you allow that woman Jezebel, who calls herself a prophetess, to teach and beguile My servants to commit sexual immorality and to eat things sacrificed to idols.

The exact identity of this beguiling prophetess called "that woman Jezebel" is not known.

In fact, Jezebel might not have been her surname. According to Scripture the name Jezebel virtually became a by-word for all that was abominable following the ancient Queens' corruption of Israel with idols and pagan practices (2 Kings 9:22; 1 Kings 16:31; 21:25,26). It's quite possible that Jesus was merely pin pointing a particular female member of the congregation who had been corrupting the church in the manner of Jezebel, and not necessarily identifying her by name.

Nonetheless, she's a corrupt and dangerous figure who had slithered into the church disguised as a prophetess in order to beguile the congregation into committing themselves to idolatry and sexual immorality (probably according to the doctrine of the Nicolaitans).

2:21-23 'And I gave her time to repent of her sexual immorality, and she did not repent. Indeed I will cast her into a sickbed, and those who commit adultery with her into great tribulation unless they repent of their deeds. And I will kill her children with death. And all the churches shall know that I am He who searches the minds and hearts. And I will give to each one of you according to your works.

We might conclude that this woman was no newcomer to the church for she had "time to repent". Seemingly, she had been around for a while under the watchful eye of Jesus, and could have turned away from her evil practice. Because she didn't, Jesus issues this decree:

"Indeed I will cast her into a sickbed."

Although speculative, this might allude to an untimely death. Perhaps, because of her unrepentant sin, God made a determination to strike this woman down and kill her as He did the ancient Jezebel (1 Kings 21:23; 2 Kings 9:30-37); which is also consistent with New Testament teaching (see-I Cor.11:27-30).

"And those who commit adultery with her into great tribulation unless they repent of their deeds. And I will kill her children with death."

This somewhat different admonition to the converts of Jezebel (taken to mean "her children") has led some commentators to see this judgment finding its ultimate fulfillment in the future. Whereas, Jezebel is cast into a sickbed, which might be an untimely death, her converts are first cast into great tribulation, and without repentance then to certain death.

The phrase "into great tribulation" might refer to the period Jesus spoke of as a time of "great tribulation" (Matt.24:21), or the second half of what we commonly call the Tribulation. If so, then it would suggest that a line of converts dating back to Jezebel do exist in our day, will not be raptured, and will enter the Tribulation; ultimately to endure its suffering, and finally death unless they repent.

Okay, but who are these children of Jezebel?

I see it as the Roman Catholic Church. It has idols, teaches unsound doctrine, and yet consists of born again believers, as there were in Thyatira (note the next verse).I am not suggesting that a Catholic is evil. "For whoever calls upon the name of the Lord shall be saved" (Romans 10:13), regardless of church affiliation.

But I do believe that Catholicism, in practice, beguiles members with its idols, rituals, and false doctrines, and thereby harbors "children of Jezebel" trusting in those things as God's revelation without knowledge that "unless one is born again, he cannot see the kingdom of God" (John 3:3).

2:24-25 'But to you I say, and to the rest in Thyatira, as many as do not have this doctrine, and who have not known the depths of Satan, as they call them, I will put on you no other burden. But hold fast what you have till I come.

Any doctrine that perverts the gospel of Christ is an abominable doctrine from "the depths of Satan." For it's the desire of Satan to subvert truth.

Jesus lays no further burden those in the congregation not corrupted by Jezebel, but a command to "hold fast." Theirs is not a sentence of tribulation and death, but cautionary warning not to let others wrest the truth away from them.

2:26-29 'And he who overcomes and keeps My works until the end, to him I will give power over the nations--'He shall rule them with a rod of iron; as the potter's vessels shall be broken to pieces'--as I also have received from My Father; and I will give him the morning star. He who has an ear, let him hear what the Spirit says to the churches." '

"...to him I will give power over the nations--'He shall rule them with a rod of iron; as the potter's vessels shall be broken to pieces'-as I have also received from My Father."

This could refer to the future power and dominion we share with Christ during the millennium, when His kingdom is established on earth, and He triumphantly reigns over the nations; or perhaps to a heavenly position, when we sit down with Christ on His throne of judgment and join with Him in condemning the ungodly (1Cor.6:2). Either way, the Father has given the Son the nations as an "inheritance," and the ends of the earth as a "possession," and He will rule with a scepter of iron, and break the ungodly nations into pieces like a potter's vessel (Ps.2:7-9).

"And I will give him the morning star."

At the very least we can take this to mean that Christ, Who is "the bright and morning star" (Rev.22:16), will one day present Himself to us, and we shall behold His face (Rev.22:4). Interestingly, however, it might also indicate that we will one day be given full knowledge concerning God. That at the appearance of Christ darkness will fade, and we will see all things in the light of His glory; and as we behold Jesus all of the mysteries of God will be revealed to us, and all of our questions will be answered (check-2 Peter 1:19).

Though never a large city of any political importance, Thyatira did thrive as a manufacturing and commercial center during New Testament times. Lydia (the first convert of Paul at Philippi) is mentioned as "a seller of purple fabrics" from Thyatira. Nothing of the ancient city can be seen today, but the modern city of Akhisar in Turkey marks its ancient site. 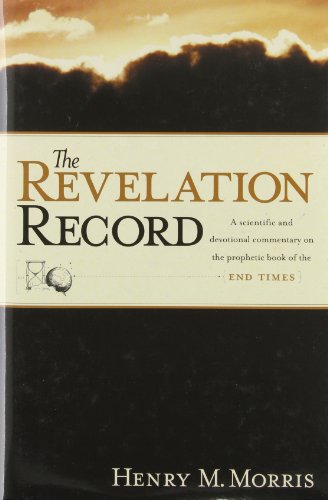 The Revelation Record: A Scientific and Devotional Commentary on the Prophetic Book of the End of Times
Buy Now