Chrysoprase Gemstone is a translucent apple green colored variety of Chalcedony Quartz stone with a hardness of 7 on the mohs scale with a trigonal Crystal structure. Chrysophrase is cryptocrystalline quartz and is composed mostly of silicon dioxide. It is mostly used in jewelry and carvings. This Stone is often mistaken for Imperial jadeite because of its resemblance and is also referred to as called Australian Jade. This stone is also seen in other shades of green (lemon colored, grass green and more). The darker varieties of Chrysoprase stone is also referred to as Prase. Another name associated with this stone is Green Chalcedony . It is also a balancing stone representing money and prosperity and derives its color from the nickel content. The word Chrysophrase comes from the Greek word ‘chrysos prason’ which means ‘golden leek’.

This stone is the Traditional Birthstone associated with the month of May. It is also one of the Gemstones associated with the Zodiac Sign of Gemini. The reference of this stone can be found in the Holy Bible (Revelation 21:19-20) where the foundation stones of the New Jerusalem are listed. Ancient Greek, Romans and Egyptians are known to have used chrysoprase in jewelry and other ornamental objects. Historically, Chrysophrase was used as a decorative stone for interiors. The usage of this stone can be seen in the interior of Wenceslaus Chapel in Prague. Chrysoprase was also said to be a ‘Victory Stone’ and was used by Alexander the Great in the battles he fought. The King of Prussia (1740 – 1786) Frederick the Great (Frederick II aka Der Alte Fritz ) apart from his passion for playing flute was also known for his obsession for Chrysoprase that he adorned his Palace with objects and furniture made of this stone. He was said to wear a ring set with a large chrysoprase surrounded by 15 diamonds which he never took off from his hand. So much was his fascination for this stone that he even had a walking stick with a knob of chrysophrase.

This stone should be preferably carved in the shape of a heart and set in silver. Because of its color and rarity often bigger and clear stones come at a high price. These crystals are found in several places including Australia, Brazil, Austria, Czechoslovakia, Madagascar, Zimbabwe, Tanzania, and California, Germany, Poland, South Africa, Russia and the USA. 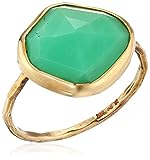 Healing and Metaphysical Properties of Chrysoprase

Chrysophrase is an excellent stone for Meditation. It is a very effective stone for the Heart and Sacral Chakras. It is said that by carrying this stone in the pocket and near the bed at night can help in speeding up healing of any wound. It is a calming stone and is said to increase compassion, communication, encourage loyalty, fight loneliness, promote emotional balance and give inner peace.

Chrysoprase is known to be a protector from negative energy and a powerful detoxification stone against pollutants and side effects of medicines. This stone is also said to be useful in treating depression, infertility, hormonal imbalance and restlessness. This is an excellent gemstone for relaxation and peaceful sleep. Those who get nightmares may keep the stone with them. This stone is helpful in balancing the yin-yang energies and heal a broken heart. This is a good stone to keep as a lucky charm if you are looking for work or working on a new project or business which you want to succeed. Chrysoprase is the stone of Venus and is said to bring good health and harmonious longevity to marriages. It is a crystal for love and helps one to open up to a new love relationship.

Exposure to sunlight may cause the stone to lose the color and luster. However, it can be regained if the stones are immersed in water for some time or stored in a moist place. There is no harm in wearing the Chrysoprase Jewelry while taking bath or using the swimming pool. It is a hard gemstone and can be cleaned using soapy water. However, protect the stone from hard blows, chemicals, hot temperatures and too much exposure to sun.