There are some who say that a man’s belt is the most important part of his wardrobe. These people say that men’s belts make all the difference in a man’s appearance, whether he looks well dressed and well put together or not. Your personal views on the subject might not be quite so strong, but one thing is for sure and that is that men’s belts that are properly sized and in the right style for the clothes being worn with them will make a huge difference in both your comfort and the way you appear to others. Men’s belts should be chosen carefully and in mind of when and where they will be worn.

How to Buy Men’s Belts

If you are looking into buying a new men’s belt, there are a few things you should keep in mind while you are shopping. These simple tips will help make sure that you buy a belt that is comfortable and fits right and that will be right for the occasion, whether it is a men’s belt for work, for a fancy night out, or for casual wear.

First of all, men’s belts should be sized according to your pant size by adding a couple inches to the length. In other words, if you wear a size 36 in pants, your belt should be a few inches longer, a belt that is size 38 or 39. You should be able to buckle the belt in one of the middle holes in order to make it look best around your waist. When you are shopping for men’s belts, if you can, try the belt on for size, even if you are not wearing the type of pants that you would normally wear the belt with. This way you can make sure that you are buying a belt that fits correctly.

When purchasing men’s belts, think about the shoes you will be wearing at the same time. Generally, the belt color should match that of the shoe color. This can be easy if you are buying a black or brown belt since you likely have shoes in that color too. Also, think about the width of men’s belts. The rule of thumb is that thicker belts, over about an inch and a half wide, are considered causal while thinner belts are more formal. The same is true of buckles on men’s belts. Large buckles are considered more casual than thin, sleek buckles. Think about the difference between the buckle you would wear with a pair of jeans as opposed to a pair of dress pants.

One other thing to think about when buying men’s belts is the material they are made from, as well as their finish. In most instances, leather belts with a shiny finish are going to more appropriate for work or other more formal settings while belts made from canvas or cloth of some sort are more casual. Again, think about the shoes you would wear with a particular pair of pants and then buy your men’s belts accordingly. 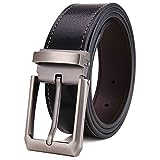 Once you’ve got a good idea the kind, style, and size of belt you will require, then it is time to go shopping. This is the fun part! Head on out to your local department store or hit the internet. Make sure to do some good comparison shopping while you are at it too. You can often find the same brand of belt cheaper at some stores or websites than at others.

If you really want to see a wide selection of men’s belts, then you should make sure to stop in at Belts.com. Here you will find belts for every purpose and for every pair of pants that you own. There are designer belts, belts for the golf course, belts for evening wear, belts that would be look great in the out of doors, and belts that go well with shorts. There is even an entire category at Belts.com that is devoted to reversible men’s belts. Buying one of these is like getting two belts in one.

Of course, wherever you buy men’s belts, you should keep in mind the tips given above for sizing a belt, making sure that it is plenty long enough for your waist size. This will ensure that you look and feel great, the whole time you have your belt on. After all, you will be spending a lot of time wearing your belt.