In design terms, the Scottie dog is special. With the possible exception of the ubiquitous French poodle, this little dog has probably appeared on more consumer products than any other breed. Scotties have been a particularly popular model for brooches, especially in the 1930s and again in the 1950s, when the animal brooch was probably at its zenith.

Wirey Scotties are an adorable dog with a great, distinctive shape and plenty of personality, making them an eye-catching motif. They also have a vintage appeal, since their image has graced a plethora of goods since the pre-war era and often pop up on vintage calendars, tins, jewelry etc. But why were Scotties, in particular, the chosen design icons of these early and mid-century pop-culture pieces? We might have to delve into a little bit of Scottie dog history to find out... 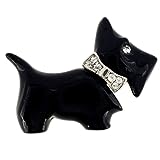 Scottish terriers were the IN dog in the1930s. Film stars, writers, musicians ...even presidents seemed to favour the Scottie during this period. They took on the panache of a stylish accessories and were seen out and about with their owners at all the fashionable places.

President Franklin Delanor Roosevelt was a famous Scottie enthusiast, as was his wife, Eleanor and between them they owned several dogs, the most well-known of which was a Scottie called Fala, given to FDR by his cousin, Margaret Stuckley. Famously, the President loved that dog and whenever possible, took him with him wherever he went.

Having such an illustrious owner did much for the Scotties PR and the dog's popularity was capitalised on by contemporary designers and advertisers of the period. Scottie dog brooches were produced in bakelite, marcasite, gold, enamel and metal.

Getting the President's Ear

In later decades, the Scottie was also favoured by Presidents George W Bush and in the 50s, Dwight Eisenhower, who once remarked:

The friendship of a dog is precious. It becomes even more so when one is so far removed from home.... I have a Scottie. In him I find consolation and diversion... he is the "one person" to whom I can talk without the conversation coming back to war.

Scottish terriers enjoyed a resurgance of popularity in the 1950s and Scottie brooches, in particular, became very voguish once again. Animal brooches - mice, cats, poodles etc, were in vogue and since the Scottie was already an iconic breed, not surprisingly it turned up on brooches and pins.

The brooches were often made out of sparkling marcasite, with a contrast enamel colour used for the collar and eyes but they also appeared in plastic and metal. 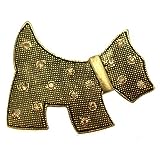 The Scottish terrier is very old breed and while it is difficult to pinpoint their exact origin, Scottie-like terriers are referenced in some of the earliest records. They are descendants of the West Highland white terrier, the Cairn and the Dandy Dinmont. According to most accounts, the Scottie is somewhat reserved in temperament, at least toward strangers. However, although not overly demonstrative, they are nonetheless loving and loyal with family members. They can also be feisty but usually adapt well to household situations.

Originally bred for hunting out and killing foxes, weasels and badgers, the Scottie's short stature and tough, wiry coat were a distinct advantage while scrambling in the undergrowth and thus the development of these features was encouraged by breeders. Scottie owners are just as devoted as their dogs and the breed has its own loyal following of human admirers.

Scottie dogs are still a popular design motif. Though the real life dog breed has declined in popularity since the 1930s, in design terms, the Scottie is still going strong and has a strong retro appeal. They conjure nostalgic images of faithful companions and more innocent times.

They're a beautiful little dog.