Cameras with Geotagging Make It Easy to Record Location Data

Have you ever been on vacation and taken a photo, only to get home and forget where the image was taken? Or have you ever spent hours adding geo tags to your photos so you can sort and view them later by location? If so, you'll be happy to know that new cameras with geotagging features can automatically embed GPS data into your photo's meta data. That means you'll never have to worry about where a photo was taken or spend time adding manual geo tags. The camera does it all for you! Here are some of the bestselling and best-rated cameras with geotagging built in.

The Canon PowerShot S100 is currently the most popular camera with GPS on Amazon. That's because it comes packed with many other features that also make this a great camera. It features a 12.1 MP CMOS sensor, 5x optical zoom and a fast f/2.0 lens. It can shoot in multiple modes, including RAW and JPEG, and you can also shoot 1080p HD video.The GPS function can automatically embed the location and local time of all your still photos and videos, and you can then display your images on a map and track your route from photo to photo. You can also create custom maps and mini-travel guides to share with your family and friends. But that's just the beginning. Other cool features include:

- Super Slow Motion Movie to record your video in high speed and then play it back in slow motion. 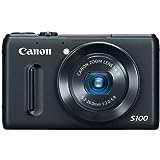 Canon PowerShot S100 12.1 MP Digital Camera with 5x Wide Angle Optical Image Stabilized Zoom (Black)
Manufacturer description: The PowerShot S100 is a sophisticated pocket-friendly point-and-shoot digital camera that has the power advanced Canon PowerShot S100 at Amazon.comusers and enthusiasts need to create standout images. As with other PowerShot cameras, the compact PowerShot S100 incorporates all of the advanced Canon technologies that make capturing superb photos and video as easy as pressing a button. As automatic or manual as you need it to be, the PowerShot S100 is a serious photographic tool, which incorporates the Canon HS SYSTEM, now featuring the new DIGIC 5 Image Processor. The fast f/2.0 lens helps you tackle unfavorable lighting and capture breathtaking portraits with beautiful, shallow depth-of-field. 12.1 Megapixels ensure crisp, richly detailed images, and a 5x Optical Zoom provides an excellent all-around range to shoot near or far.
Buy Now

If you want a camera with GPS that can get you close to the action, the Lumix ZS20 may be the one for you. It has an amazing 20x optical zoom (equivalent to a 24-480mm lens on a 35mm camera) that can achieve up to 40x digital zoom. It features a 14.1 MP sensor and a 24mm ultra wide-angle lens. The built-in GPS displays not only latitudes and longitudes, but also the name of the country/region, state/province, county/town/village where you're at. It can also identify more than 1,000,000 landmarks in 82 countries or regions.

In addition to these features, the Lumix ZS20 offers a host of other functions to help you capture and create great photos:

- Intelligent HDR takes several still images shot at different exposures and overlays them into a single composite picture to avoid over- or under-exposure.

- Auto Retouch adjusts contrast and brightness with the press of a button to make all your images look great.

- Continuous shooting allows you to capture up to 60 frames per second in 3.5 MP resolution or up to 5 fps in high resolution 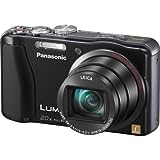 The built-in GPS system on the Nikon Coolpix P510 isn't the only cool feature on this camera. It also has an incredible 42x zoom (24-1,000mm equivalent), claiming the honor of having one of the world's longest optical zoom on a compact camera. It comes with a 16.1 M CMOS sensor, full HD video with stereo sound, continuous shooting up to 5 frames per second, a 3-inch LCD and many other features.

If you're looking for a camera with geotagging to take on an adventure, the Panasonic Lumix DMC-TS4 is a good choice. This rugged camera with GPS is one of the most popular waterproof compact cameras on the market due to its ability to take great photos and survive tough conditions. It's waterproof to 33 feet, shockproof to 6.6 feet, dustproof and freezeproof to 14 degrees F. Whether you're above or below water, the camera's 12.1 MP sensor,, 4.6x optical zoom and 1080p HD video will help you capture great shots every time. The camera's built-in GPS can display your latitude and longitude, as well as area information from 203 countries or regions and landmark information of over 1,000,000 locations around the world.

In addition, the TS4 offers these features:

Panasonic Lumix TS4 12.1 TOUGH Waterproof Digital Camera with 4.6x Optical Zoom (Blue)
Manufacturer description: The DMC-TS4 is shockproof, waterproof, dustproof and freezeproof in design. Swim along with tropical fish and capture shots of beautiful coral reefs, or take recordings of your friends around a camp fire. The DMC-TS4 is an extremely versatile camera that you can take with you wherever the action calls.
Buy Now

Some cameras with geotagging functions are also waterproof, shockproof, freezeproof and dustproof

The models above are currently the most popular cameras with geotagging, but they're not the only ones. Here are some of the other results for "cameras with GPS" on Amazon.

4 Top Rugged Cameras 2012
Each year, the number of rugged cameras on the market increases and the features offered on these models gets even more impressive. In 2012, the top rugged c...

Which Pink Canon Camera?
Are you looking for a pink Canon camera? If you're here, color may be one of the factors you're considering in a camera, but what other features do you want ...

Digital Photography Backup: Save Your Pics!
If you're like one of the many millions of people who've abandoned the world of film and made the jump to digital photography, you probably have many importa...

Best SLR Digital Camera On Sale
These are the best SLR digital cameras on sale right before the holidays. Pick up the best performance SLR cameras. If you want those perfect shots by the Ch...