The Western Reserve Building, situated at the triangular and sloped conjunction of West 9th Street and West 10th Street at Superior Avenue West is one of Cleveland’s finest tall office buildings of the Chicago School style. Seeming much taller than its actual height to traffic circulating below, it displays its deep-hued prominence at the western end of the Detroit-Superior Bridge, high above the winding Cuyahoga River and the Flats District below. You can view more about Northeast Ohio at rickzworld.

Completed in 1892, the eight-story office building was designed by famed Chicago architect Daniel H. Burnham, as one of his several building commissions within the growing city near the turn of the century. The building was designed and constructed for Samuel Mather, a prominent Cleveland industrialist and philanthropist.

The building’s shell rises in load-bearing brick masonry from sandstone piers, while its interior structure of tile-arch floors are carried on both cast-iron and wrought iron members. It bears a grand Romanesque entry arch on West 9th Street, while window bays project from its primary façades. Many of these take in the setting western sun, and the opposite banks of the Cuyahoga. The corbelled brick cornice capping the building faces hearkens from Burnham’s signature Monadnock Block of Chicago.

The Western Reserve Building was substantially restored in the mid-1970s by the Higbee Development Corporation, and a paired eight-story office structure faced in white microcotta was added to its northern flank in 1990 by Keeva J. Kekst Architects (now ka, inc., with its headquarters within that companion structure).

The structure derives its name from the fact that much of the land throughout northeastern Ohio was once part of the colony of Connecticut's 'western reserve' of frontier lands, and that appellation has since been applied to many facilities and institutions throughout the Cleveland area. 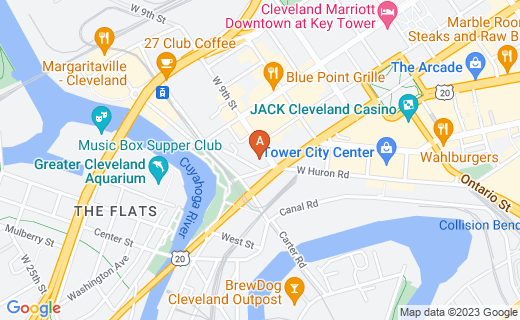