My travels to Detroit, Michigan began on business trips my family combined with short vacations in the sixties. The mining manufacturing industry took my father to Michigan, around Ohio, and as far south as North Carolina. All of these places offered dozens of attractions and beautiful scenery, but my favorite was the area of Detroit - Royal Oak - Dearborn. This triangle contains enough attractions to keep you busy for a month and is still one of my favorites.

If that is not enough, Windsor, Ontario Canada is across the Detroit River by tunnel or the great Ambassador Bridge. That's a grand sight when all lit up at night and is about a mile and a half long.

Traveling to Detroit three to five times a year, I visit different places each time. One memorable trip was during early July 2009 when I watched Michael Jackson's memorial service on a big screen TV at a restaurant a few blocks from the Detroit Public Library and the People Mover monorail stop on Gratiot Avenue in central downtown.

The following are some of the places to see in Detroit that you might not know.

Oldest Bowling Alley in the World, With Live Music and Pizza

The Garden Bowl is located at 4104-4120 Woodward Avenue and is one of the places people like to stop during the Woodward Dream Cruise in August. It is about 10 blocks/1 mile north of Grand Circus Park.

Built in 1913, this bowling alley is part of a large entertainment complex that features a live music venue called Magic Stick, The Majestic Theatre, Majestic Cafe, Sgt. Pepperoni's, and special events at each.

Woodward Avenue is a historic street in Detroit that extends all the way to Pontiac, Michigan.

The Dream Cruise is a vintage and classic car cruise in that is the largest in the world. Drawing over a million visitors and 40,000 cars in the categories of muscle cards, street rods, and several others, the Dream Cruise extends up and down Woodward Avenue for three days between Detroit and Pontiac each August. Additional events occur in conjunction with this mega cruise in and many of the cruisers stop at the great restaurants along the way.

Woodward Avenue is a straight shot of about 20 miles all the way between the two major cities and the cruise in takes most of a day as drivers cruise leisurely and enjoy the scenery as onlookers on the sidewalks watch them and wave.

There is no charge to watch or drive with the cruise in autos - just keep out of the two right hand lanes where they will be driving on Woodward. See woodwarddreamcruise.com. 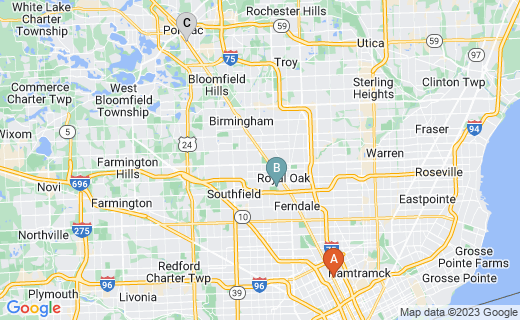 In 1980s Detroit, I traveled for a work conference and stayed in a downtown hotel near the river. It featured a short monorail over to a large multilevel mall in the middle of the city.When you stepped out of the monorail car into the mall, you could smell exotic coffees brewing and pastries baking in the shops.

Run on magnets, the monorail was cutting edge at the time. The People Mover is a tram or monorail that travels around a circuit of the inner Downtown Detroit venues as shown on the map below.

Tram stops are located around the circle near shopping, libraries, dining, historical attractions, entertainment venues, the Renaissance Center, and the Detroit International Riverfront,among others. Information kiosks at the tram stops offer booklets of maps and coupons for the various places along the route. 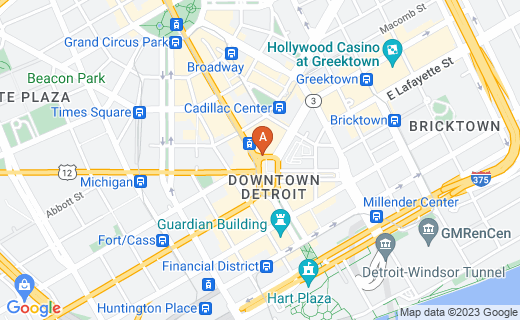 The cost to board this monorail is 75¢ (only 35¢ for Seniors and the Disabled) and if you alight and wish to re-board, 75¢ again each time. A monthly unlimited pass is only $10.00 and an annual pass is only $100.00, rates lowered to offset rising gasoline prices.

Cheaper than a taxi, the monorail takes you within a block or two of nearly every major attraction in the downtown area. I ride it every time I visit Detroit, just so I can ride out over the Detroit River and see all of downtown, including new office buildings, in one circuit. That's a good ride for 75¢!

People Mover Began As A Tram

The Downtown People Mover swings out over the Detroit River to give passengers a view of the entire Waterfront.

In the early 1980s, a short span of electromagnetic tramway ran from a downtown hotel to a large mall, but today, the People Mover circuits the entire central city.

Campus Martius is named after the Roman Field of Mars, where warriors are said to have walked in the next life. This park is part of a complex that includes Cadillac Square Park adjacent to the east. Several People Mover stops surround these parks and an ice rink/roller rink, Hard Rock Cafe, and Tim Horton's sit just north on Monroe Street. the Public Library on Gratiot Avenue is a couple blocks north of that. 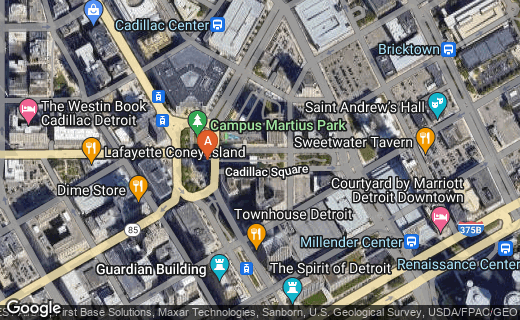 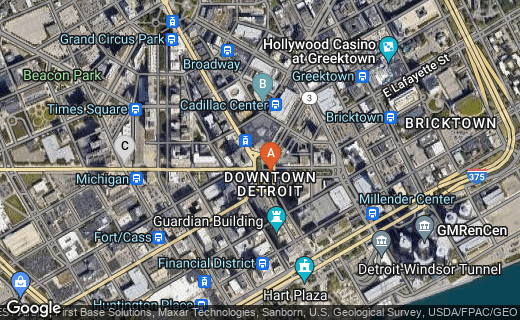 Zoom in for street level photo images and business names.

A People Mover stop is across the street.

Along the International Riverfront

The People Mover swings out over the Detroit River at this point for a stunning view of the entire protected riverfront. The International Riverfront reaches from the beautiful Ambassador Bridge east to the redeveloped Belle Isle.

This riverfront development is about 5.5 miles of well developed parks, dining places, retail, skyscrapers, residential buildings, the Cobo Convention/Exhibition Center, the Joe Louis Arena, and the Renaissance Center. All of these places have been featured in various full length films. from the People Mover, you can see people having lunch in the parks during the week. Get off at the Renaissance Center stop to join the others enjoying the various parks. You can rent a bicycle and ride across the MacArthur Bridge to Belle Isle and visit historical sites there as well (see links at the end of this article).

AUTO SHOWS ON THE RIVERFRONT

America's first auto show was held in 1907 Detroit at a beer garden at old Riverside Park.It repeated every year except the war and recovery years of 1943 through 1952. it moved to the COBO Center in 1965 and became the North American International Auto Show in 1989, with over 1,000,000 square feet of floor space. The show is a two-week gala held across two weeks every January. 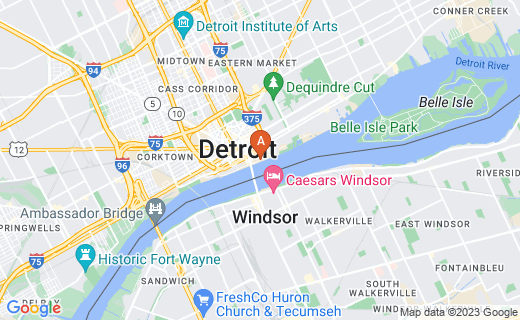 COBO Center On the Detroit River

Detroit burned in 1805 and a man called Woodward laid out a new city beginning at Grand Circus Park and radiating outward in spokes from a central circle. The park today is a half-circle with Woodward Avenue cutting through the middle of it. The park has its own People Mover stop and is located just south if I-75.

The park sits in the theater district and connects to the city's financial district and, in fact, houses the new Detroit Opera House at 1526 Broadway Street. This street extends to the Harmonie Music District that celebrates music from the 1930s to current genres.

Broadway runs down into Gratiot Avenue and the attractions of Campus Martius and other downtown venues. The Harmonie Club is along the way and although it was renovated in modern times, its appearance has changed little from 1899. 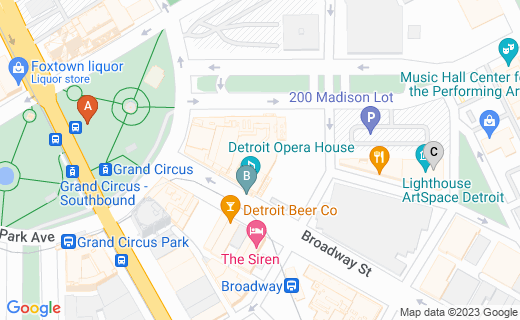 The Detroit Institute of Arts (founded 1885) on Woodward Avenue contains one of the largest art collections in the world.

A National Historic Place, the art institute contains over 100 separate art galleries, having been expanded more than once; and, houses the Detroit Film Theatre.

The arts in this building range from oils to armor, from a tile from the Ishtar gate of Babylon to a self portrait of Vincent van Gogh.

Already on a par with the Louvre, the Institute added a wing of all manner of puppets in 2010. A music room in the museum is also well-enjoyed.

A few blocks from Woodward Avenue, the Motown Historical Museum sits in a house that was converted into a winning music studio for all the artists of the 1960s Motown Sound.

This includes Ike and Tina Turner, the Supremes (with lead singer Diana Ross, reportedly a waitress in a downtown department store), The Jackson 5, The Four Tops, The Spinners, and dozens of other hit groups. 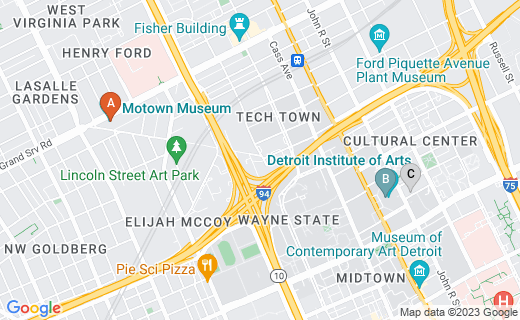 Established in 1907 this is Michigan Historic Place and a gallery, a studio, and an artist's Club near the DIA.

Detroit Transit to the Zoo, 10 Miles From Downtown

There are two city bus stops at opposite ends of the Detroit Zoo, making this zoological park more accessible to the public than some other zoos around the country. Just 10 miles north of Downtown Detroit, bus riders can enter one gateway and exit the other at the far end of the zoo and pick up the bus there, saving the walk back to the main gate. For drivers, the zoo parking lot is easily accessible from Woodward Avenue and highways I-75 and I-696.

Even back in the 1960s, this zoo was one that used a system of more natural outdoor habitats for its animals, separated by pits and low walls from the visitors, rather than small cages and bars.

The Detroit Zoo is just one of the attractions found on Woodward Avenue and those that attend the Woodward Dream Cruise often stop at the zoo during the three-day classic car celebration along the 20 miles of Woodward Avenue.

Rackham Golf Club is adjacent to the zoo, on the west side of the zoo grounds. Just south west of the golf course is Parkwoods Plaza Shopping Center. 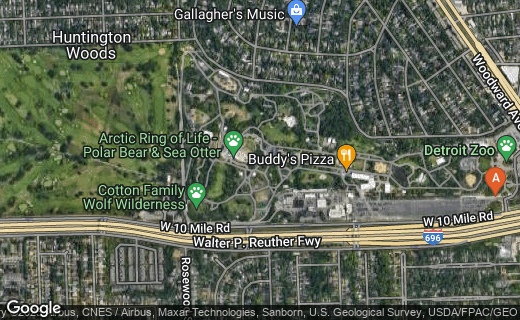 These sports are held in venues next to one another in Downtown Detroit along the People Mover monorail system and just off highway I-75. Ford Field is an indoor arena used for football, basketball, and several other events;while Comerica is used for baseball.

Although the Comerica address is given as 2100 Woodward Avenue, the ball park is also on Brush Street, next to and just west of Ford Field.

Tickets to some of the important games in various professional sports held at these venues are available below. 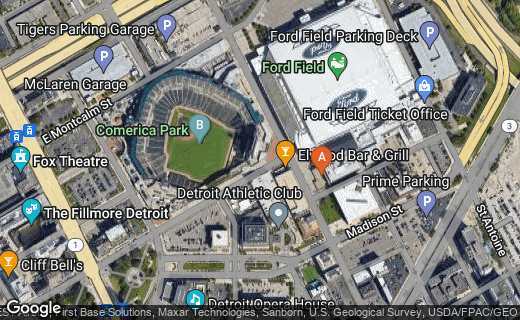 Large statues of Lions and Tigers adorn the baseball stadium in Downtown Detroit.

This vintage record store in the northeast section of Detroit called Hamtramck has moved to a new location at 2610 Carpenter with a grand opening in June. This new site is a renovated house that has an antique tin ceiling and is near the Coleman A. Young International Airport.

The atmosphere in the record shop is 1950s, which goes along with the stock of vinyl, all vinyl, regular sized and 7" discs. It is a great place for DJs to find bargains and the stock rotates frequently. Used records are 50% off or more. Jazz is a specialty, but all genres make their presence felt at Record Graveyard. 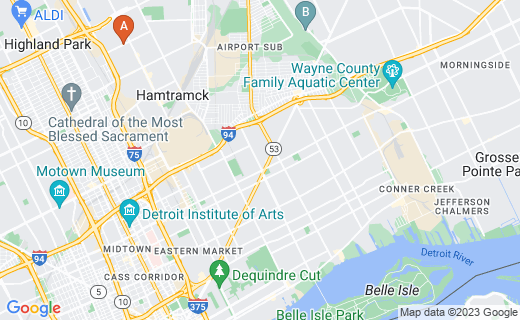