Family Things to Do: Houseboat on Lake Cumberland, Kentucky

What is a boat:

A boat is a vehicle for water transportation used since man first figured out that a hollowed log could accommodate him travelling down a river. Boats are categorized into three types: manpowered, such as canoes or kayaks; sail boats, which are obviously manned by the wind; and motorboats.

One of the best websites for boating information is: discoverboating.com. What I like is the description given about the various boats and the diagrams. There are tips, charts, surveys and colorful photos that make a person salivate. If considering purchasing a boat of any size this is the place to go to learn the ins and outs of boat ownership.

Boating can lead to long lasting memories of family fun no matter what type of boat you may have. Some of my fondest memories have been boating with my dad during fishing and camping trips. His was a 15 foot flat back aluminum fishing boat, powered by a motor. How we all crammed into it when we were younger I have no clue, but it worked. And, no one came aboard who didn’t have a life jacket on. Back in the ‘60’s they were the bulky, orange vests that resembled pillows strapped against your chest.

Does it appeal to you to have a houseboat adventure?

Renting a Houseboat on Lake Cumberland

Houseboats are larger versions of fishing boats with the comforts of home. One summer, my youngest daughter booked a family houseboat vacation with another family. They had the time of their lives on Lake Cumberland and many photos to scrapbook with later. It’s an unusual way to ‘rent’ a summer stay on a recreational lake, and one that takes a bit of courage if you’ve never navigated a boat. But, the staff at the marina offers lessons for novices, and the houseboats are equipped with a radio that can quickly connect you to the office.

Lake Cumberland State Park is a reservoir located in Jamestown, Kentucky. It was constructed in the 1940’s as part of a project to bring flood control and hydroelectricity into the area. It is rated the 9th largest reservoir in the United States with its 1225 miles of shoreline and 50,250 acres of water space. With over four million visitors annually Lake Cumberland State Park is considered one of the finest fishing and boating areas in the Eastern U.S.

Many of the houseboats are equipped with hot tubs and tubular slides, among other amenities. Jet skis and rubber rafts are usually an added cost, unless you bring your own, but kids and adults alike enjoy taking turns being pulled behind the boat on a board or raft.

Some of the other activities that are located in the area are: The Wolf Creek fish hatchery; mini golf and regular golf; roller skating rinks and bowling alleys; movie cinemas and live stage theatres; and interesting restaurants to dine in. 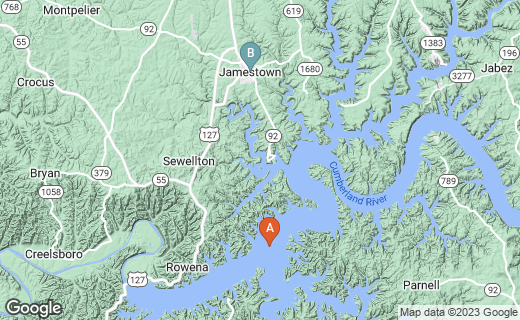 Recreational lakes have their share of boat enthusiasts such as speed boats and sail boats. Since I do not have much experience with either, I cannot tell you about the joys of doing either. I do know that those who love boating will attest to the excitement and peace that being on the water brings to them.

The benefits of having a larger boat are plenty-more room to enjoy a relaxing day of fishing; more speed to attach a skier at the back and pull him along; more entertainment in watching, or participating, in speed boat races each year; more reliability to travel longer distances visiting unfamiliar shores. I was surprised to find how many different styles of powerboats there are. From sitting capacity to motor power, there is as many reasons for water vessel choice as there are individual boat owners.

One of my favorite comedies, The Great Outdoors , stars the late John Candy as the well-loved family man and his obnoxious brother-in-law, played by Dan Akroyd. Although the entire movie is filled with comedic scenarios that are sure to evoke laughter, one of the funniest parts is the 'lesson in waterskiing'. For those who have not viewed this older film it is a must see.

Canoes and kayaks are simple modes of water transportation which takes a minimum of people-usually one or two, to maneuver them. Although similar, the difference between the two is that a canoe is an open boat where the occupant sits or kneels and navigates with a single paddle; and the kayak is most often a closed boat where the occupant sits with legs forward and navigates with a double paddle.

Kayaks were first used 4,000 years ago by the Inuit people on the cold waters of the Arctic and North Pacific and North Atlantic Oceans, and Bering Sea during seal and whale hunting. The first kayaks were made from seal skins which were stitched by the women, and each man made his kayak to fit his own body. The kayaks were made water resistant due to the icy waters of their environment.

Canoes are frequently associated with the history and culture of indigenous people throughout the world, however, according to Wikipedia, the first canoe is on record as having been found in Pesse, Netherlands, dating between 8200 – 7600 B.C. It currently is on exhibit at the Drents Museum in Assen, Netherlands.

Sailboats are examples of a boat’s grace and beauty on the water. One of the impressions left with me about the Kennedy family was their great love for sailing. Although I have only been sailing once, I worked for two summers on Mackinac Island, a resort in Lake Huron, Michigan. I always enjoyed the excitement the annual ‘Race to Mackinac’ regatta would bring.

This year will mark the 103rd race from Chicago to Mackinac Island-the very first one being held in 1898 and intermittently throughout WWI. According to the Chicago Yacht Club, it is “the oldest annual freshwater distance race in the world”. Participation in this amateur event is by invitation only via the Chicago Yacht Club, and there is no prize money. This year race brings 355 boats at the starting point: The Chicago Lighthouse. For more information, log onto: cycracetomackinac.com.

What type of boat do you own?

Do you own a boat? If yes, please mention what kind in the comments below.